With visual precision and remarkable intimacy, Hannah Olson's documentary "The Last Cruise" recalls the harrowing 40-day quarantine aboard the Diamond Princess cruise ship at the outset of the pandemic. On January 20, 2020—the same day when the World Health Organization first reported cases of COVID-19 appearing outside of Wuhan, China—the cruiseliner set sail on a prototypical journey on the high seas. The trip took its multinational manifest of passengers and crew from Japan to Vietnam, Taiwan, Hong Kong, and back to Japan’s Port of Yokohama. Using their smartphones, the subjects recorded their daily adventures, which grew more precarious by the day and serve as a microcosm for the year-plus crisis the rest of the world would soon experience.

Over 40 poignant minutes, Olson identifies three American couples, the most memorable being Mark and Jerri Jorgensen, heads of an in-patient addiction treatment center for pornography and sex addiction. They are forever chipper even when the situation doesn’t call for their upbeatness. Conversely, of the selected crew members, there's the Indonesian dishwasher Dede Samsul Fuad, who began working on cruiseliners to explore the world, provides us with fascinating behind-the-scenes footage of the ship’s inner-workings. In a documentary that’s not so much investigative as it is revelatory, the two spectrums provided by the two parties’ cellphones show a ship initially unfettered by the virus—passengers were still participating in parties, group workouts, and other onboard activities—only to descend into panic over the coming days as infections skyrocketed.

The film's kitschy score leaves much to be desired, taking a dystopian tone a la “Blade Runner” as the enormity of the situation becomes clear, then enveloping a horror film mood as the onboard circumstances become dire. Still, Olson teases out the claustrophobic fears felt by the passengers and crew, and the bleakness that sprouts when facts are being hidden. The Diamond Princess’ captain might say the situation is “under control,” but when the white hazmat suits do appear at the port, and the stream of suite doors denote the infected by simply saying “COVID-19,” the officials’ opaqueness can only elicit worry for those on-camera.

Though the narrative scope is mostly confined to the ship, we do get glimpses of hospital rooms as positive passengers are segregated off the vessel. On the Diamond Princess exists two universes: the passengers waiting for room service in their spacious apartments replete with outdoor decks, and the tireless crew below deck who keep the ship functioning, working beneath the waterline where light does not enter. Pastry chef Maruja Daya, for instance, explains how she works 13-hour days for a salary of $997 per month. In his recordings, Dede often makes note of how he can now enter certain forbidden areas—the lavish portions of the ship reserved for travelers—now that the halls are empty. The Diamond Princess is still the Titanic, wherein the payment is the privilege to serve.

Olson doesn’t judge the wealthier passengers’ sorrow, even while rampant socio-economic inequality exists on the ship. She knows two perspectives can be right at once: The American passengers possess certain entitlements not shared with the underpaid crew which slightly lessens their ordeal, yet the fundamentally different economic stratas can feel the same anguish when confronted with death. But that equal endgame doesn’t distract Olson from explicating the heavy toll faced by the beleaguered crew—the long hours, the cramped quarters, the fear of losing their job if they speak out, and their hopelessness that the rich will be saved while they very well will be left to die. Their accumulated distresses are tangible whenever someone’s camera captures the faint sound of a cough in the background. It’s akin to seeing a shark fin in the water.

These conditions of late-stage capitalism still color the worldwide pandemic response. The United States will soon own an excess of COVID-19 vaccines, for instance, while “at least 30 countries [the poorer ones] have not yet injected a single person,” per the New York Times. Just as the Diamond Princess made for a bellwether to warn of the virus being airborne, their example shows how the world is “one team” until the evacuation begins. The contours of Olson's modestly shaped documentary reveal anxiety, panic, and indulgence—it's the the alarm we were missing a year ago, and we're still hitting the snooze button. 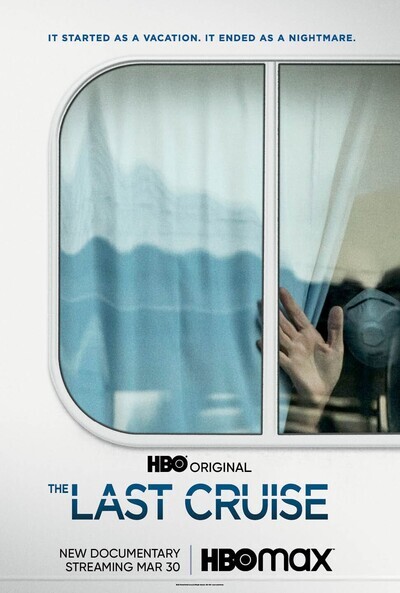 Rebecca Frasure as Self

Kent Frasure as Self

Cheryl Molesky as Self

Paul Molesky as Self