Alex Gibney’s Hulu documentary “Totally Under Control” was hurriedly put together under unusual circumstances. The talking heads involved were sent a camera dubbed “the Covid Cam” so they could be recorded and interviewed safely. Working with co-directors Ophelia Harutyunyan and Suzanne Hillinger, Gibney uses this footage to explore how the current COVID-19 pandemic unfolded over the past 10 months. It’s practically an up-to-the-minute investigation—one day after it was finished, the leader of the current administration tested positive for this movie’s subject. That was two weeks ago. The filmmakers resist the temptation to gloat or express schadenfreude. It should be noted, however, that over 30 politicians and military figures were also infected at the same event.

As of this writing, over 200,000 Americans have died from this disease, with a thousand new cases happening every day. The country is getting hit the way my NYC-area brethren and I were pummeled earlier this year. We know a lot more about the virus than we did back in March when my area shut down in quarantine, yet the situation has gotten no better. In fact, it appears to be worse, with warnings that this latest surge is just the tip of the iceberg for America and much of Europe. In the timeframe covered by “Totally Under Control,” seven million Americans have already sickened by the virus, a hundred thousand small businesses have closed down and hundreds of thousands of people are out of work, with many worried about eviction and the lack of healthcare. Meanwhile, Congress is currently more concerned with a Supreme Court nominee than the survival of the American people.

That Congress isn’t dragged for its lack of action is one of the more frustrating aspects of this film. In fact, we don’t see a single Senator or Representative outside of a rare moment where they’re hearing testimony from the people who guide us through the documentary. But I think Gibney’s intention is to simply provide an organized timeline for the events leading up to the present day, starting with the first documented case in Seattle back in January. As we traverse the timeline, we’re also given details about how South Korea handled its cases and the resulting differences between them and us. LA Times’ Seoul correspondent Victoria Kim and Hong Kong native Caroline Chen are on hand to offer commentary.

For the most part, we’re not told anything we didn’t already know about what’s happening in America, though we are privy to a fleshing out of the details. The film’s most basic explanation is that this pandemic has become a political football, a battle between science and those who choose loyalty over facts. It becomes a pitch-black running joke whenever a scientist’s explanation is immediately preceded, or followed, by you-know-who parroting wishful thinking ideas about how this disease is going to go away by itself. “We’ve got it totally under control,” he says at least six times in Presidential appearances.

Watching “Totally Under Control” you really get the sense that the powers that be really don’t give a damn that there’s a thousand new cases a day, nor that masks have become a symbol of patriotism only if you don’t wear them. There’s a very likely theory for the apathetic response: the disease is most deadly toward people of color, those with pre-existing conditions and the elderly. “When America gets the flu, Black folks get pneumonia,” says the University of Virginia’s Covid ICU director, Dr. Taison Bell, quoting his grandmother (and my own beloved Mama). The disease also takes a mental toll on the people in Dr. Bell’s profession, fellow practitioners and nurses who are seen begging for extra masks and medical equipment at the height of hospital overcrowding back in March and April. This is the first time masks are used as political currency; governors are forced to bid on supplies only to be outbid by the federal government.

Gibney has assembled a wide variety of people with something important and insightful to say, including several who paid dearly for breaking with the administration’s marketing message to tell the truth. Former BARDA director Rick Bright, former CDC director Dr. Tom Frieden and other medical professionals lead us through protocols and e-mail threads from way back in January when a lot of things were correctly predicted. We also hear from Beth Cameron of Obama’s administration and Mike Bowen, who gives invaluable information about how the N95 mask shortage occurred. Other people of note are Max Kennedy, a 20-year-old volunteer from the medical equipment procurement team and, to my surprise, Dr. Vladimir Zelenko, proponent of the hydroxychloroquine cocktail that the FDA touted earlier in the year. For the math junkies in the audience, there’s Dr. Eva Lee, whose pandemic-inspired mathematical models are fascinating and eerily prescient.

“Totally Under Control” will become a useful document for the study of this pandemic in its eventual aftermath. It’s a bit too surface-level to be completely satisfying, but it was enough to overwhelm and upset me so much that I had to turn it off several times to decompress. I had good reasons: I’ve lost several friends and family to the 'rona, as my people nicknamed it, and many other family members have been infected. It’s the reason why I can’t see my parents, why I couldn’t attend funerals, and why I’m pretty much a prisoner in my own home where, thankfully, I can still work at a job I hope I don’t lose. Granted, I’m not sure how much differently things would be had a lot of the ideas depicted here been followed, instead of tossed into the wind out of fear of one person’s ego. But I am damn sure that I’d at least have an idea how much longer I’d have to endure this hell if they had been. 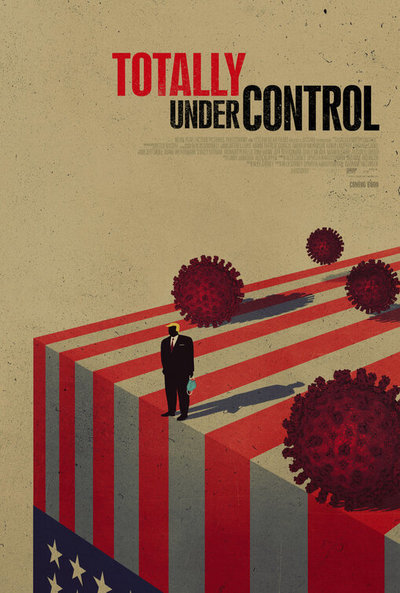