“Hubie Halloween” attempts to get a lot of comedy mileage out of Adam Sandler yelling like he's about to die. Another of the Sandman’s lovable grown children, Hubie has become the target of constant pranks by everyone in the town of Salem, especially around Halloween. This allows Sandler scene after scene of people mocking him, throwing things at him, and terrifying him. Of course, being a Sandler movie, it’s also a wish fulfillment underdog story. There’s never any doubt that Hubie will save the day, win the town over, and even get the girl. All of this predictability is forgivable at times due to the overall affability of the project, especially when compared to more abrasively awful Netflix Happy Madison productions, but it’s another one of those Sandler flicks that suffers from slack, lazy filmmaking. That it’s more enjoyable than something like “The Ridiculous Six” or “The Do-Over” feels like the faintest of praise.

Sandler reunites his team of regular collaborators yet again for a Halloween-themed comedy about the most bullied guy in Salem. A self-anointed Halloween monitor, Hubie (nicknamed “Pubie” by most of the town’s residents, of course) spends the holiday season making sure kids aren’t buying a suspicious amount of toilet paper, but he generally just navigates constant torture from everyone around him. This year’s chaos isn’t helped by the escape of a famous mental patient who may be coming to town or Hubie’s new neighbor (Steve Buscemi), who may or may not be an immortal werewolf. Living with his mother (June Squibb) and pining over the girl (Julie Bowen) that he’s been in love with since elementary school, Hubie is a classic Sandler creation, complete with a mumbled, heavily-accented delivery that’s never explained. He's basically a holiday-themed version of his character from "The Waterboy."

So many Sandler buddies return to “Hubie Halloween” that it almost feels like a fan service project. By now, people come to a Happy Madison movie not just for Sandler himself, but expecting to see former collaborators like Rob Schneider, Buscemi, Colin Quinn, Kevin James, and even his odd assortment of cameo stars like Dan Patrick and Shaquille O’Neal. An early cameo here that connects to “Happy Gilmore” sets the stage for a movie that’s thoroughly designed for HM fans, and director Steve Brill brings the same style that he did to other Madison films like “The Do-Over” and “Sandy Wexler.” What that means is that “Hubie Halloween” eventually succumbs to the same pacing issues that plague almost every one of these movies. There’s no reason for “Hubie Halloween” to be over 90 minutes long, and the film sags under the weight of repeated jokes and when Hubie’s initial wide-eyed naiveté wears off. Almost every scene goes on a bit too long. Humor is based on timing, and I’ll never understand how someone as smart as Sandler makes comedies that get such an important element wrong.

And yet I have to admit that there are bits, especially in the set-up during the first half-hour, that made me laugh. The neighborhood kids who torment Hubie have moved on from throwing food and toilet paper at the poor guy, graduating to lit bags of excrement and even an axe. Buscemi is always welcome, even in parts that don’t challenge him, and there are fun faces in the supporting cast like Kenan Thompson, Maya Rudolph, and a going-for-broke Ray Liotta. When “Hubie Halloween” gets occasionally surreal and unpredictable, it defies that predictable Happy Madison brand of humor that has become so numbing. But that feeling starts to fade as you realize that Julie Bowen is playing a non-character, even by Happy Madison standards, and that Sandler and co-writer Tim Herlihy again don’t have the urgency that comedy needs to work. Even as the plot gets more intense when people in Salem start getting kidnapped, giving Hubie a real mystery to solve, the timing drags in ways that are almost more frustrating because there’s enough here to piece together a comedy that would have worked.

While he was doing press for “Uncut Gems,” Adam Sandler joked that if he didn’t get an Oscar for that film that he would torture us and make the worst Netflix comedy ever made for revenge. The good news is that this is not that movie. “Hubie Halloween” is just generally entertaining enough to be harmless, while also being the kind of movie that people will have trouble remembering exists by the time he makes “Tommy Thanksgiving”. 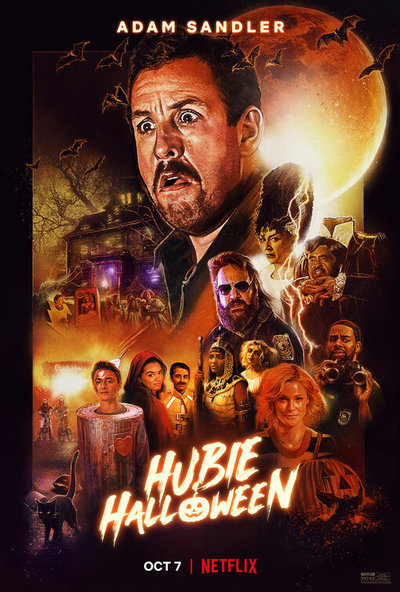