Steven Brill’s “The Do-Over,” the latest in a multi-picture deal between Netflix and Adam Sandler, starts like a real movie. At first, there’s a sense that it’s something at least greater than the half-star abomination that was last year’s “The Ridiculous Six.” This feeling doesn’t last long. By the time this unfunny, sexist, homophobic, stupid movie has reached the hour point, any goodwill created by the set-up is long gone. At one point, I checked the time code on Netflix and saw that the movie had over forty minutes to go. I visibly winced.

The set-up is OK (at least when compared to the increasing laziness of Sandler’s recent output). Sandler plays Max, a smooth-talking guy who runs into an old friend named Charlie (David Spade) at a reunion. Charlie’s life is a mess. His wife Nikki (Natasha Leggero) is sleeping around (with Sean Astin), his kids hate him, and he’s just generally miserable. Reuniting with Max turns him into a goofy teenager again, having fun and avoiding his depressing reality. When Max decides to fake their deaths so they can start over in Puerto Rico, Charlie doesn’t object for long. Of course, they can’t party it up in their new identities for long without the need for a convoluted Happy Madison plot, and that’s when armed men show up and they get involved with the widow (Paula Patton) of one of the men whose identities they stole. Narratively, it’s a film that gets markedly dumber with every passing minute.

“The Do-Over” is the kind of film in which two essentially 50-year-old men (Spade is 52 and Sandler is 49) are riding around on a yacht when they spot a few bikini-clad ladies on another vessel. If you’re playing Sandler Mad Libs at home, you instantly know that Adam is going to ask the women to flash them. They oblige, but then ask Spade’s character to return the favor by dropping his trousers, after which they laugh at his dick. Sandler then shoots the women with a flare gun. And the cherry on this Bad Scene Sundae comes with the following in voiceover, “I couldn’t believe it. I was having the best time of my adult life.” It’s one of only about three times I laughed out loud while watching “The Do-Over,” but not for the reasons Sandler wanted.

I use this example not just to point out the incredibly low level of humor in “The Do-Over,” but to note how structurally, tonally disastrous the whole thing is. Like that scene, almost every moment has multiple punchlines. Charlie and Max decide they have to get tattoos and piercings to match the dead guys. Charlie finds a stud, thinks it’s for his ear, and then learns it’s for his tongue. That’s the joke. Then we get a wide-eyed shot of it going in. Then we get the swollen tongue the next day. Then we get a scene of him eating a popsicle, unable to talk. Imagine a stand-up comedian who just piles on to one lame joke after another, repeating the punchline with a few words changed. The rhythm isn’t there. It feels desperate, almost as if the deal that Sandler worked out with Netflix required that he be paid by the minute. How else to explain the fact that this film is 108 minutes long? (And it feels twice as long as that.)

There are really brief spots that work, most of them courtesy of the fearless Kathryn Hahn, who shows up as Max’s crazy ex. Hahn has the comic timing to make nearly anything work, even this disaster. I wish I could have followed her into a better movie. Although her arrival is right around when most people will realize how sexist this whole thing is. Almost every female character is there to be screwed or to screw the guys over. Or both. This is how Sandler’s brand has always portrayed their female characters, but it’s just increasingly depressing. When the climax of the film features a catfight set to Madonna’s “Crazy For You,” in slow motion, I shouldn’t be surprised, but that doesn’t make it any more forgivable.

For years now, Adam Sandler has been making movies to bankroll his vacations. That’s why most of “Just Go With It” takes place in Hawaii. “Blended” actually shot in South Africa. Sandler gets his buddies together, finds a studio to pay for them all to take a vacation, and loosely “writes” a movie set in his chosen destination (screenwriting credit goes to Kevin Barnett and Chris Pappas). This time it was Puerto Rico, and Sandler puts in the same degree of effort as his disastrous theatrical “Vacation Comedies." You’d think by now that someone would figure this out. Maybe the studios did and that’s why Sandler ran to the remarkably open checkbook of Netflix. Maybe one day, they’ll read the script before they book the plane tickets. Or at least make sure he's got one. 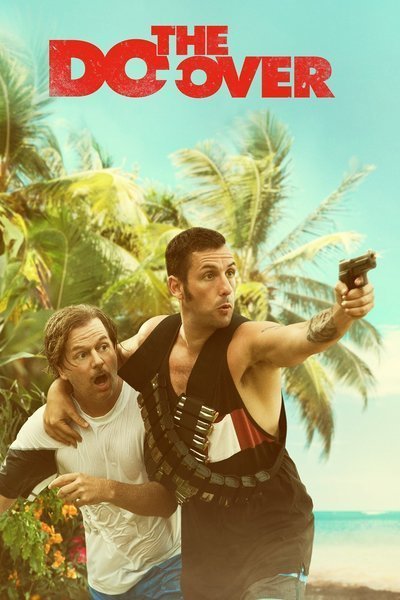