“Sandy Wexler” marks the third Netflix Original Film starring Adam Sandler (and his friends) and second directed by Steven Brill. To say it’s the best of Sandler's three is only indicative of how unbearably awful the first two attempts were. Unlike “The Ridiculous 6” and “The Do-Over,” there’s some stuff here that works, and you can even, believe it or not, see glimpses of the Sandler who has put effort into films like “Punch-Drunk Love” and “Funny People.” This is Sandler’s first actual Netflix performance. It’s in a film that still sucks.

It took until this movie for me to realize that Netflix should be pissed. What I’ve come to notice as the critic of all of the Happy Madison Netflix films is that the creators of these movies, Sandler in particular, saw Netflix as a place to lower their efforts. And those efforts weren’t too high when these films were going theatrical. Everything has felt like a first draft. Every scene goes on longer than it needs to as if no one ever considered the timing of the final product because, well, it’s just Netflix. Running times over two hours; jokes that seem like they’re never going to end; supporting roles filled by buddies who often look like they’re just there for the catering—well, it’s just Netflix.

Sandler plays the title character, a low-level talent manager in the ‘90s—one of his major clients is “the guy who got his heart ripped out of his chest in 'Temple of Doom'”—who is being remembered by friends and colleagues at some sort of modern day gathering that’s unclear. And so the film cuts back and forth between Sandy’s story and celebrities “remembering Sandy,” including Jewel, Vanilla Ice, Pauly Shore, Baba Booey, Henry Winkler, Jimmy Kimmel, Conan O’Brien, and Salt N Pepa. Yes, it’s the weirdest collection of people at a party in Hollywood history. And it’s an even stranger structure in that the writers often give this crew the same thing to say over and over again. Sandy ate like a slob and laughed awkwardly, but he cared greatly about the people he managed, a ragtag crew of entertainers on the edge of the business.

Sandy’s clients include a ventriloquist who is always with his dummies (Kevin James), a daredevil who sucks at his job (Nick Swardson), and a mediocre stand-up comedian (Colin Quinn). None of them are particularly talented, but Wexler never tells them that, and there’s an interesting story that develops in the film about the tragedy of living life as a yes-man. At a certain point, you have to say no and you have to help people face the reality of a fame-less life. That story is a subplot to the much greater arc of Courtney (Jennifer Hudson), an R&B singer who Sandy discovers at a theme park and turns into a massive star. Of course, Courtney becomes too big for Sandy. Of course, Sandy secretly loves Courtney. Of course, all of this is connected by wacky interludes meant to be funny, but you will very rarely laugh.

There’s a halfway decent and interesting 90-minute dramedy buried in this 131-minute film, but Brill again shows his complete lack of pacing and timing. Over 90 minutes into this thing, you’re watching Terry Crews punch another man in the ass in one of many asides about Wexler’s clients. The film has zero sense of build or moving toward anything because it has that Brill, lurching momentum. There’s an earlier bit about jumping in a forbidden pool that goes on forever. And there are at least a hundred jokes out of a “Wacky ‘90s” joke book, including recurring bits about how wrong Wexler is about the future—he advises a client to pull all of his money out of Apple and put it in small local bookstores. And, of course, it wouldn’t be set in the ‘90s without an OJ joke. ‘90s fringe celebrities pop up repeatedly. Having Arsenio Hall play himself once is kinda funny—four times not as much. But the fact is that Brill and Sandler never wrote a joke that they didn’t think was worth repeating until you were sick of it.

And yet this film is definitely not as easy to quickly dismiss as Sandler's last two Netflix joints. It’s interesting to consider that Sandler came up in the ‘90s, and that a lot of the people involved in memories of this fictional character were much bigger then (I’m looking at you, Vanilla Ice and Pauly Shore). In a sense, Sandler has always lived in the past—it’s the core of most of his man-child comedies, especially “Grown Ups”—and so seeing him play a character who’s somewhat stuck in an outdated existence has a meta quality that could have been fascinating but feels underdeveloped.

That’s what all these movies are—underdeveloped. They’re lazy. That this one is more interesting than the previous ventures almost feels accidental at times. Still, it’s hard to shake the feeling that “Sandy Wexler” could have been Adam Sandler’s most complex film in years, but … well, it’s just Netflix. 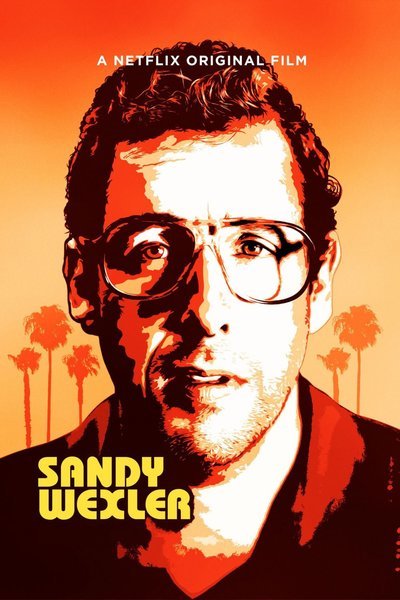