As professional athletes continue to work to control more and more of their public image through social media, the commodification of them becomes an increasingly interesting topic for debate. Especially for young basketball players just entering the league, how much of their personalities and even their daily lives they give over to the NBA can impact how they’re perceived both by the public and by the people who sign their checks. Just listen to Karl Anthony-Towns or Donovan Mitchell, interview subjects in Steven Soderbergh’s “High Flying Bird,” as they discuss what it’s like to be in the NBA in 2019—expectations are everywhere, from how much money they’re going to make their first year to playing time to Instagram followers.

Our window into this world is Ray (a great-as-always André Holland), a high-powered agent who is struggling to keep his head above water during an NBA lockout. If the players don’t get paid, Ray doesn’t get paid. And one of his biggest players is the #1 pick, Erick Scott (Melvin Gregg), who just wants to get out there and start making a name for himself. He’s also dead broke, and the film opens with Ray admonishing Erick about a dumb loan he just took out. And then Ray’s corporate credit card gets declined. These are people who should be rolling on beds of money, but the lockout has completely neutralized them. In a sense, “High Flying Bird” is about refusing to remain in limbo—about doing something to empower yourself to find success.

After learning from his assistant (Zazie Beetz) and then boss (Zachary Quinto) that his expense accounts and even salary have been frozen, Ray puts a plan in motion. There are actually echoes of Soderbergh’s heist movies in the way Ray is kind of the Danny Ocean of this affair as he tries to fast-talk people like the NBA Player’s Union rep (Sonja Sohn), head of the owners group (Kyle MacLachlan), and even the mother/agent for Erick’s potential rookie competition on the team, should they ever play again. Does he want an end to the lockout? Or maybe he wants a radical evolution of the game?

The script for “High Flying Bird” by Tarell Alvin McCraney (“Moonlight”) is razor sharp, clearly coming from deep research into the issues and concerns that define the modern athlete while also remembering to be wickedly entertaining at the same time. This isn’t a ‘message movie’ and yet it’s impossible not to walk away from it and think something in the system of professional sports is broken. Ray and others (including the legendary Bill Duke as a local basketball coach) regularly speak of the “game on top of the game,” referring to how white owners created a system designed to not only profit off of but control their mostly black players. It was something that was needed more in the ‘70s and ‘80s than it is in the era of Instagram. Imagine if Lebron and Steph announced they were playing a one-on-one at the Staples Center tomorrow. How long do you think that takes to sell out? And yet players aren’t allowed to do anything that’s not NBA-sanctioned. Why? They’d tell you it’s to maintain the image of the NBA, but it’s also so they make sure to get the biggest cut.

For “High Flying Bird,” Soderbergh once again shot on an iPhone, using even fewer digital effects than he did for “Unsane.” He spoke in the excellent intro Q&A for the premiere of the film at Slamdance about how he loves the way that iPhone shoots allow him to know immediately what he’s got. He doesn’t have to wait for film to be developed. He can watch that day’s shoot at home and adjust the next day’s shooting schedule if he needs to. Lest you think this is purely a technical element of production, it adds an energy to the filmmaking of “High Flying Bird” that you can sense on-screen. You can feel the excitement that Soderbergh gets from experimenting with a new form of filmmaking.

At least he’s allowed to experiment. An interesting anecdote in the pre-screening Q&A revealed how “Out of Sight” (a personal favorite movie of mine) was a major turning point for him. As he put it, he had made several films in a row that people didn’t like, and he couldn’t afford another one. If “Out of Sight” had tanked, he might not have been in Park City this weekend. And then he pointed out how he was 35 when that turning point came, an age by which most pro athletes are retired. These young men have such a small window to turn their talent into something that will then sustain them for the rest of their lives. Is it any wonder that they’re trying to take greater and greater control of what happens within that window?

Most modern sports movies feel a few years behind the story—purposefully nostalgic for a feel-good, motivational story. “High Flying Bird” feels like a product of the 2018-19 NBA season, which may not have a lockout but is dealing with the same issues. I wish I could be in the room when some of the young stars of the game like Anthony Davis or Joel Embiid watch this movie. Actually, I wish even more I could be in the room when the owners of their teams watch it.

This film was reviewed from the Slamdance Film Festival. 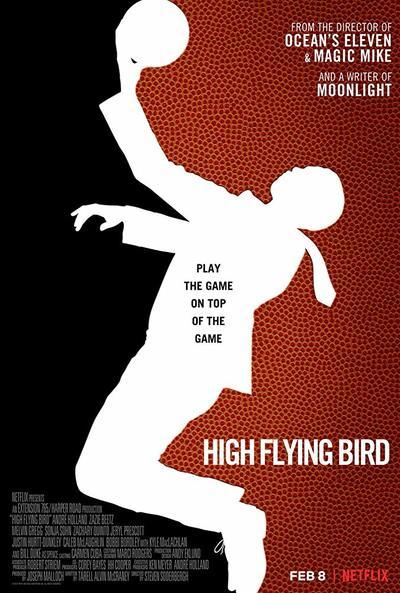