Steven Soderbergh’s “Unsane” opens from the perspective of a stalker. We hear in voiceover how the object of his affection made him see the world in a completely new way. And make no mistake. This woman is an “object” to this man, someone who does not have her own agency or reality outside of what she can do for him. We will later learn that the stalker is a man named David Strine (Joshua Leonard) and the woman is Sawyer Valentini (Claire Foy), whom he met while she was caring for David’s father in his final days. He became obsessed with her because of the comfort she provided his father, and, by extension, David. In other words, she became an object that made him feel good and so he felt a truly one-sided connection, as they often are with stalkers. On the surface, “Unsane” is a potboiler, a routine stalker thriller. But it works because of how much there is going on within that familiar structure, courtesy of Jonathan Bernstein & James Greer’s smart script, Soderbergh’s claustrophobic direction, and Claire Foy’s committed lead performance.

Sawyer has been traumatized by her experience with David, and it’s impacted her professional and personal life in a way that has made her seek treatment. She goes to a facility, tells her story, and fills out a few forms. Before she knows it, she’s being asked to hand over her personal belongings and asked to strip. She’s going to have to stay for at least 24 hours for observation. Of course, she freaks out, trying to get a hold of her mother (Amy Irving), and even calling the police. When she mistakes an orderly for her stalker and strikes him, her “sentence” is increased to seven days. She meets a threatening patient named Violet (Juno Temple) and a supportive one named Nate (Jay Pharoah), who tells her that she’s basically part of an insurance scam, in which hospitals like this one admit patients just to get money from their providers.

As if all of this wouldn’t be nightmare enough, Sawyer is startled to see David handing out medication to the patients. At first, he claims to have no idea who Sawyer is, and her admissions of trauma allow those around her to easily disbelieve her claims that her stalker has infiltrated the hospital at which she’s staying. There’s a fascinating subtext that's woven through "Unsane" about listening to women when they tell you something wrong. The first doctor that Sawyer goes to in a panic when she realizes she has to stay doesn’t get off the phone right away to talk to her; an attorney that Sawyer’s mother calls for help hangs up without waiting for questions or even saying goodbye; and even the new role in which Sawyer may or may not be seeing David is that of a controlling male: someone literally drugging the people under his care so they’ll behave in the way they want him to. Without overplaying the gender dynamics in “Unsane,” Bernstein, Greer, and Soderbergh have something to say about controlling, unlistening, needy men. (And there’s another commentary on the failure of our healthcare system that ties this work to “Logan Lucky,” which also undeniably had that theme.)

And they say it with a daring new visual style. “Unsane” was shot on an iPhone and has a crazy aspect ratio of 1.56:1. It’s somewhere in between an old-fashioned full-frame ratio and a traditional widescreen, creating a boxy look that perfectly suits a film about someone who’s essentially trapped. Once again, Soderbergh presents such a remarkable economy of visual language, as he does in almost all of his work. It doesn’t feel like there’s a wasted shot here. (If anything, it feels like a few scenes could have used a bit more material.) For the most part, “Unsane” is lean and mean, giving you just what you need to stick with it. And the visual style has an immediacy that adds to the intensity, especially in early scenes when confusion reigns and most of all in a fantastic sequence that has already been called “The Blue Room Scene.” It feels like a style that allows little room for traditional acting or production crutches, which places more weight on Foy’s shoulders. She rises to the challenge with a complex, daring performance. She’s great here.

While Soderbergh does all he can to elevate the material, the final act doesn’t land with the same weight as his best work as the script veers down a few roads that include a few too many plot holes and diminish the work overall. It's a bit frustrating to see "Unsane" succumb to some traditional traps in the final scenes, especially after being so daring up to that point. Having said that, the first hour is so interesting, Foy is so good, and Soderbergh is so clearly still at the top of his game, that the relative failures of the climax can be forgiven.

After a brief retirement, Soderbergh has come roaring back with two very different films in “Logan Lucky” and “Unsane.” He’s reportedly already submitted a cut of another movie, starring Andre Holland, to be released later this year, and he directed the series “Mosaic” for smartphones and HBO. He’s not only back, he’s as active as he’s ever been. And the film world is better for it. 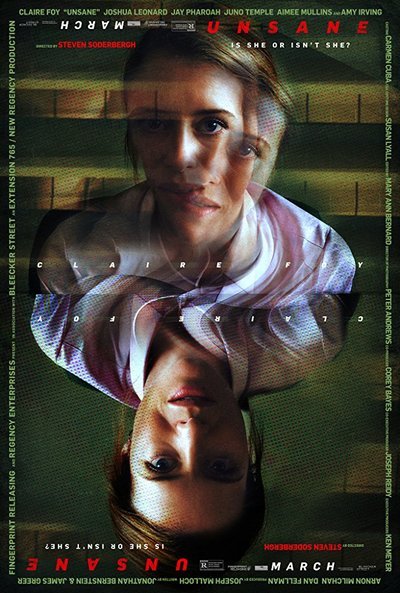