"Hellbenders 3D" is one of those films that expends so much time and effort in trying to become the next big cult sensation that it never gets around to simply being a good movie. This is a bit of a shame because it has a nifty premise, a lot of energy and a cast that is clearly committed to the cause. All are pretty much squandered on a final product that is so haphazard and self-consciously outrageous that it makes "Machete Kills" seem focused and nuanced by comparison.

The film focuses on the Augustine Interfaith Order of Hellbound Saints, a multi-denominational group of renegade priests led by the beyond-grizzled Angus (Clancy Brown) who willfully indulge in any and all forms of debauchery in order to prepare themselves for their duties of hunting down and exorcising demons. The idea is that if they encounter one that is too powerful to be defeated by conventional means, they will coax the demon to possess their "damnation-ready" bodies and then commit suicide as a way of consigning themselves to Hell and taking the evil spirits back to from whence they came. Remember the famous quote from "Mean Streets" when Harvey Keitel muses "You don't f--- with the infinite"? The infinite is about the only thing that this group doesn't f--- with here, though I suppose there is always the "Unrated" Blu-ray to look forward to.

The trouble begins when a possessed rabbi announces a dire prediction of the world going up in flames and grows exponentially when one of the Hellbound Saints, adorable Unitarian Elizabeth (Robyn Rikoon), is taken over by a demon but fails to make the final cut with the razor blade hanging around her neck. This is especially bad because she is now inhabited by Surtr, an all-powerful demon known as "The God Killer" who now roams the streets in her body and is transforming hundreds of ordinary people into slavering zombies as a prelude to the ultimate destruction of everything. Angus and the other Saints (Clifton Collins Jr., Dan Fogler, Andre Royo and Macon Blair) are all that stand in Surtr's way, but not only do they have to figure out a way of defeating it, they also have to contend with a stick-in-the-mud representative of the archdiocese (Stephen Gevedon) who considers the group an embarrassment to the church and wants to shut them down at the worst possible time.

As I said, the idea of cheerfully depraved priests wallowing in endless sin in the hopes of providing salvation for all is a clever one that, handled properly, could have been spun out into something both outrageously amusing and occasionally thought-provoking. The problem is that after establishing such a potentially promising premise, writer-director J.T. Petty (adapting his own graphic novel) doesn't seem to have much of an idea of what to do with it other than to let the story devolve into a bizarre mash-up of "Ghostbusters" and "Prince of Darkness" featuring priests who talk like Dennis Hopper in "Blue Velvet" but who, it should be noted, never actually get around to doing anything particularly shocking, at least not that we are privileged to see.

This is funny for a little bit but it gets old really quick and even Petty seems to grow weary of his tale after a while. The film grows especially dire in the home stretch as he tries to wind things up with yet another horde of zombies and an array of special effects that are shockingly chintzy even by low-budget trash movie standards, culminating in the questionable vision of jumbo-sized female genitalia as the vortex to Hell that seems like an exceptionally desperate effort to raise audience hackles. And yet, despite all of this going on, there is never any sense of urgency to the proceedings and even the priests seem kind of bored and out of it even with the threat of the apocalypse hanging over their heads. Sure, Bill Murray may have seemed similarly laid-back and removed during most of "Ghostbusters," but when push came to shove, he at least got with the program. Here, our so-called antiheroes seem as tired of the whole thing as the viewers will be.

The great Clancy Brown, who has appeared in such genuine cult classics as "The Adventures of Buckaroo Banzai" and "Highlander," gets a rare lead role here and certainly makes the most of it—although most of his lines are too self-consciously vulgar to be believed (one could start a drinking game that involves doing a shot every time he says "c--------r," but anyone playing would succumb to alcohol poisoning by the 30-minute mark), he sure knows how to deliver them with gravel-voiced flair. I also liked newcomer Robyn Rikoon as the lone female Saint, but she disappears from the proceedings for too long to do much to help the film.

Beyond that, "Hellbenders 3D" is a noisy and tiresome bore that will only offend people looking for some form of coherent entertainment—the kind of film that will send most viewers away with a migraine that for once can't be blamed entirely on the 3D. 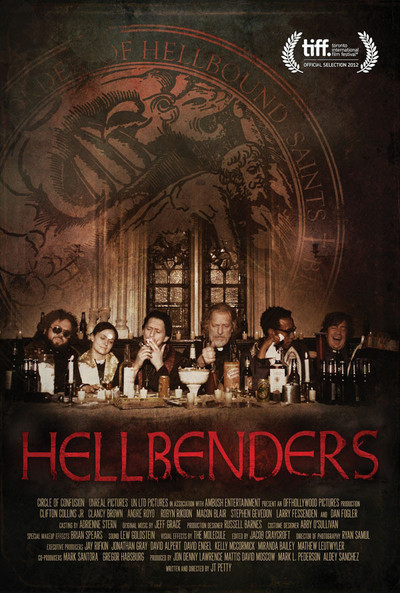