Like most of Robert Rodriguez's movies, "Machete Kills" is a self-aware exploitation picture that winks as it picks your pocket.

Written by Kyle Ward from a story by the director and his brother Marcel, "Machete Kills" returns our craggy hero (Danny Trejo) to hard-"R" action. The tale starts as an international revenge mission, then morphs into a Southwestern-fried spoof of a James Bond film, with Machete foiling a "Moonraker"-type plot by a crazed tycoon (Mel Gibson, spoofing his real-life image as a rich bully).

The picture is assembled with energy and a smidgen of style, but it's tiresome and slight. Rodriguez, who also edits, shoots and scores his movies, tries to do too much with too little here. The lighting, editing and special effects are a couple of notches up from a SyFy shark movie. Rodriguez is canny about acknowledging the picture's fast-and-cheap aesthetic; the weak green-screen effects and CGI blood-spurts are presented as a shared joke between you and the movie. Still, after a certain point viewers who paid twelve to fifteen bucks might wish that all the winking and shrugging were accompanied by more cleverness, and a sense of when to quit. At 107 minutes, "Machete Kills" is way too much of a pretty good thing.

But you could say the original "Machete" was way too much of a pretty good thing, too, and none of this constitutes a news flash. Rodriguez's 1992 breakthrough "El Mariachi," which he financed partly by renting his body in medical tests, was a rare example of a calling card that told you exactly what the caller intended to sell—not just then, but for the rest of his life. Rodriguez's brand of hucksterism has quotation marks around it, but he's still one of the few truly committed "B"-moviemakers of the modern era. His Austin-based Troublemaker Studios has turned into the Troma Films or American International Pictures of the American Southwest. Rodriguez presides over it as a director-showman, an entrepreneur who prides himself on seeing how far he can stretch a buck, or a concept. (In the time it took to read this paragraph, he probably directed another movie.)

The "Machete" franchise started life as a fake trailer in Rodriguez and Quentin Tarantino's 2007 "Grindhouse" project. Like some of the 1970s redneck potboilers and blaxploitation flicks it channeled, the first movie was more fun to remember than it was to watch, but it did well enough to prompt Rodriguez to devise two follow-ups, modeled on the original "Star Wars" sequels. This picture is littered with imagery and situations borrowed from George Lucas' 1970s dreamscapes, including lightsabers (lightmachetes?), a car that looks like land-speeder, and a deep-voiced baddie in a mask. This middle chapter is the "Empire" of the "Machete" cycle, complete with downer ending. If Machete's world were rich enough to merit even one feature film, Rodriguez's audacity would amaze. Too bad Machete don't franchise.

At least the picture has the courage of its silly convictions, pushing the original's spoofy humor to "Blazing Saddles" levels. Machete gets hanged, beaten, shot, blown up, and eaten alive by wolverines—okay, I made up the wolverine thing, but you would have believed it, right?—and yet he still has the energy to do the boom-chicka-wow-wow with a busty secret agent posing as Miss San Antonio (Amber Heard), banter with the one-eyed badass Shé (Michelle Rodriguez, channeling Snake Plissken again), kill a dozen tough guys with whatever weapons are handy, and ride a missile into orbit, in what you might call a "Reverse Kong."

Even when the director is bludgeoning us with digital gore and half-baked innuendo, he maintains a light touch. As the Mexican revolutionary that Machete is hired to find and extricate, Demian Bichir gives an appealing screw-loose performance, arching his eyebrows like Bruce Campbell in "Evil Dead" mode and exploding in bug-eyed fury. Lady Gaga, Walton Goggins, Antonio Banderas and Cuba Gooding Jr., all play an assassin named La Camaleón, and their performances are surprisingly consistent. "Modern Family" star Sofía Vergara plays a whorehouse madam and hired gun who mows down enemies with a bullet-spitting bra; freed from the burden of sitcom lovability, she chews through scenery as if auditioning for the role of Ms. Pac Man.

Charlie Sheen, billed here as Carlos Estevez (his birth name), outdoes even Gibson in the self-mocking sleaze department, playing a U.S. president who promises to expunge Machete's criminal record if he completes his mission. "My fellow Americans," the chief executive leers in a re-election ad, "it's been a groovy four years, but those were only the beginning." When somebody calls him in the White House on his bedside phone, an anonymous babe picks up the receiver and passes it to another babe. I hoped the camera would keep panning, revealing a third babe, then a fourth, and that when we finally saw the president, he'd be wearing flannel pajamas and a nightcap and spooning with Bob Newhart.

The best thing about this series is how it treats Machete's adventures as an "R"-rated folktale or bedtime story, as if he were the 21st century Mexican answer to John Henry or Paul Bunyan.  Rodriguez has a political streak that would be intriguing if it were backed up by more care and craft. A rudely funny subplot finds day laborers being mysteriously abducted à la "Close Encounters"; the punchline is that, like most Yankees, Gibson's bad guy can't anything done without Mexicans. Machete is a Mexican's Mexican, a man of the people. He distrusts Yankee law enforcement, federales, drug cartel members, American soldiers, the White House, and anyone else who tries to obstruct, reform or use him. He's constantly escaping powerful enemies by going figuratively or literally underground, like an undocumented worker hiding in plain sight. "You know Mexico," the president tells the hero. "Hell, you are Mexico."

But all things considered, I'd still rather watch Danny Trejo sum up the plot of "Machete Kills" on a talk show than sit through this slapped-together movie again. I didn't laugh as hard at any of the film's jokes as I laughed at my friend Josh asking, "Based solely on the title, I presume he has an amazing stand-up set at Caroline's?" 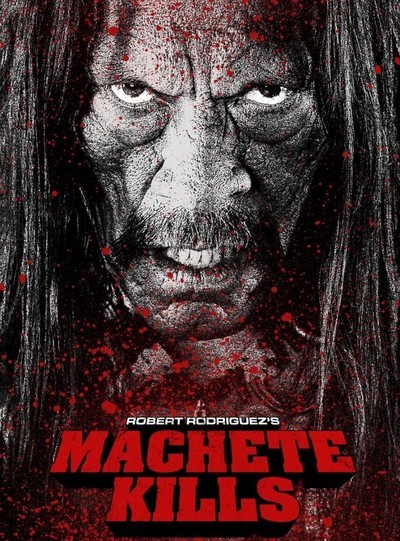