"Gold" is the latest in a subgenre of films that seems to think that the sight of men moving gigantic amounts of money around electronically—and sometimes just stealing it, or having it stolen from them—is innately fascinating. Matthew McConaughey stars as Kenny Wells, who is continuing in the family business carved out by his dad (Craig T. Nelson, glimpsed briefly in flashbacks). The movie repeatedly refers to their ilk as "miners," and they see themselves that way, with pride. But while this film by writer-director Stephen Gaghan ("Syriana") does show Kenny and various allies and rivals traveling to foreign countries and searching treacherous terrain for veins of metal, there's not much pick-axe swinging, bulldozing or blasting to be seen. These self-described miners are more likely to be seen yelling into phones about money, staring anxiously at TV reports about stock prices because they're worried about money, or flying to other states or countries to find out what happened to their money.

The tale is a true one, based on a magazine story, though of course many details have been changed or embellished. Kenny is presented as a down-on-his-luck hustler, practically begging for the money he needs to get back into the precious metals game. He's is the second modern gloss on a Willy Loman/"Death of a Salesman" type to appear in a major film this month—the other is McDonald's mastermind Ray Kroc in "The Founder," a less ambitious but altogether more satisfying drama. Like the McDonald's film, though, "Gold" often can't seem to make up its mind to be disgusted and embarrassed by its hero's naked greed and the seeming moral vacuum at his heart, or get swept up in his adrenaline rush as he scampers from state to state and to South America and back, looking for the big strike that'll make him a big shot.

Kenny goes to Borneo to find a legendary "river walker"—i.e., a hands-on geologist who actually finds the ore that guys like Kenny profit from. He's named Mike Acosta, and both the character and Edgar Ramirez's performance in the role are the best reasons to see this film. Gaghan has decided to focus mainly on Kenny and treat Mike as a bit of a question mark and source of anxiety for the hero. Is he really as great as a lot of people think? Does he truly have a sixth sense for precious metal? Or is he a doppelganger for Kenny, a man whose success is always fleeting because he has more of a talent for hustling money and trust than for doing the job he says he's mastered?

I have no idea if a movie about Mike would have been more fascinating than one focused on Kenny; it's possible that he's not deep enough to hold the center of a long, dense film like "Gold." But I do know that Kenny just plain wore me out. McConaughey has played many men like this one: wild-eyed true believers with a gift of gab who talk with their hands as well as their mouths, and often seem as if they're preaching. He's great at it. This is his kind of role. In another era, you could've plugged Dennis Hopper into it.  But the character is so one-note, always tying everything back to his need to redeem himself and his dad, and articulating so many of his concerns verbally rather than through his eyes or body, that after a while I wanted to put in earplugs and shut my eyes to get a break from him.

Much has been made of McConaughey's physical transformation here—he shaved his hairline to play a bald man and gained about forty pounds—but I never felt that he quite figured out how to get inside Kenny's mind and heart and animate him as a fully convincing fictional character. Too often he comes across as an actor trying on a look and a voice, and no matter how often the movie shows Kenny getting soused or chain smoking or lounging in a plush hotel lobby chair marinating in his own body odor, the character always seems more like an obnoxious vibe than a person.

I'm not sure why a similarly greedy, insistent, often repugnant protagonist didn't completely turn me off in "The Wolf of Wall Street"—maybe Leonardo DiCaprio is a better match for his character than McConaughey, a "Wolf" bit player, is for Kenny, or maybe Scorsese is just a more imaginative and varied director than Gaghan. (The jungle sequences are appropriately lush and oppressive, and there are a few deft montages scored to rock and pop, but this film often plays like a Scorsese riff by a storyteller whose natural medium is words, not images.)

Whatever the explanation, "Gold" ultimately fails to answer the question, "Why this story, and why put this character at its center?" Like "The Founder," though less excitingly, "Gold" bets heavily on the audience seeing Kenny's relationship with his supportive girlfriend (Bryce Dallas Howard) as proof that he's a good guy at heart, or at least has some redemptive qualities. But Kenny never comes off as anything other than a small shark in an aquarium filled with much bigger sharks (including Corey Stoll as a New York investment banker and Bruce Greenwood as a vastly more powerful rival).

And the film's excitement over Kenny's reversals of fortune, including a climactic stretch where he tries to snatch victory from the jaws of defeat, feels frustratingly at odds with Gaghan's more skeptical, at times satirical view of American capitalism and its intrusions into the economies and governments of other nations. The movie seems to want us to root for Kenny to make piles of money and humiliate his foes even as it shows him as the conscienceless emblem of an innately corrupt world.

These two storytelling impulses are very hard to reconcile (many have argued that even Scorsese wasn't able to do it in "Wolf") and "Gold" never manages to do it. The movie is a critique of robber baron behavior that derives great excitement from the prospect of its sweaty, conniving hero climbing to the top of the heap and lording it over the folks who used to badmouth him. Granted, this seems to be a built-in risk of any kind of biographical film, or any film period; cinema's nature as a medium is to make everything seem exciting and glamorous, even when most of the people onscreen are scummy. But it still would've been nice if "Gold" had figured out how to counter that tendency, or at least given us more evidence that it knew whether it wanted to. 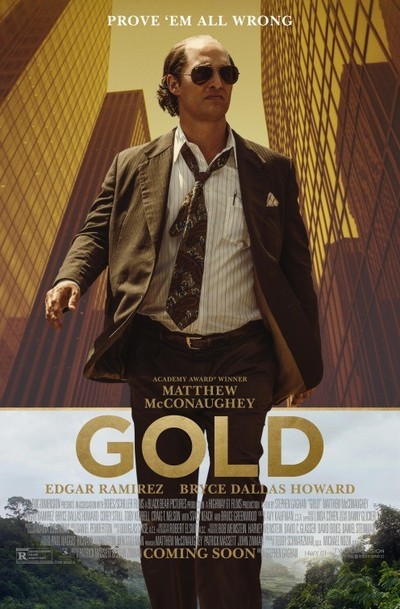