“The Founder” is mesmerized by its hero, McDonald’s chain founder Ray Kroc (Michael Keaton), but horrified by how he built his empire. That kind of ambivalence is great; in fact it’s a hallmark of good drama. But there are too many moments when “The Founder” becomes a business-drama variant of that war film problem identified by Francois Truffaut: it’s hard to make a truly anti-war film because war is inherently cinematic, and when you show it, people get swept up in the action anyway.

The bloodshed in the business drama is (usually) figurative, but the conflict is still thrilling, and so a lot of films about business end up grappling with Truffaut's war movie problem. “Glengarry Glen Ross,” “Wall Street,” “Wolf of Wall Street,” “Boiler Room” and the like are filled with the kinds of people you'd cross a room to avoid, yet you hear their lines quoted by businesspeople and b-school students as inspirational texts, probably because it's more fun to identify with the bastard who gets things done than the people who suffer from his actions. Ray Kroc is a local Chamber of Commerce version of Gordon Gekko. Keaton plays him with such laser-beam focus that even when the movie is appalled by Ray's shady maneuvers, it still leans on his every word.

As written by Robert Siegel (“The Wrestler”), directed by John Lee Hancock (“The Rookie”) and acted by Keaton, Kroc at first seems a riff on “Death of a Salesman” hero Willy Loman, or one of the real estate strivers in “Glengarry Glen Ross” who say they can't close deals because the leads are weak. We see him cold-calling restaurant owners and trying to sell them mixers out of the trunk of his car, then returning home to get pep talks from his wife Ethel (Laura Dern). By the end of the tale, he’s become the Charles Foster Kane of hamburgers—a bland megalomaniac surrounded by enablers and worshipers, ruling a corporation that he built by exploiting the optimism and trust of McDonald’s originators Richard and Maurice McDonald (Nick Offerman and John Carroll Lynch), who were bought out at a too-low price and robbed of future royalties after accepting a handshake agreement that Kroc never honored.

The film’s depiction of the McDonald brothers is devastating, far and away the strongest thing in “The Founder.” Every stop on their road to ruin is flagged and catalogued, from their decision to let Kroc expand into other states to their capitulation to production and profit-making ideas that they fear will turn the restaurant from a profitable but self-contained labor of love into a purveyor of unfrozen beef patties and powdered shakes. The movie does such a good job of showing the brothers’ bond as a relationship founded on can-do spirit that when Kroc enters the picture, lavishing praise on their idea for a “fast food” restaurant with an assembly line service model, you can see why they’d quit resisting his vision of a centralized franchise.

Up until to the point where documents get signed and large sums start changing hands, the film treats Kroc as a sad sack chasing one last shot at redemption, so we’re not surprised that the McDonald brothers would see that in him as well, and be moved to make his fairy tale (and theirs—they failed to build their own chain) come true. (Offerman and Lynch, two of the best character actors alive, top themselves here; each has several close-ups so filled with betrayal and regret that even the film seems awed by their power.)

Siegel’s script treats Kroc as the embodiment of a certain way of looking at American business values: smiley-faced positive, forever treating capitalism as a pure virtue that does so much good for society that its casualties are unimportant. On the road, Kroc repeats inspirational phrases he memorized from a self-help record. He believes in them as a cleric believes in a sacred text. His conversations with other characters are filled with formulations that you might hear from the mouth of a cult leader. They’re bold and startling but also self-serving and cynical, as when he tells the brothers that he wants the McDonald’s logo to be as ubiquitous as the American flag and the cross: “The new American church … Feeding bodies, feeding souls.”

And yet despite his blatant opportunism, Kroc sees himself as an idealist and myth-maker, not a huckster. He’s not a knowingly evil person. But there’s a void at his center—which, “The Founder” suggests, might be as much a requirement for legendary business success as the persistence that Kroc's self-help record keeps praising. (An especially deft screenwriting touch: Kroc, who claims the McDonalds’ brothers’ food service concepts as his own and ultimately steals their name, is shown repeating the “persistence” speech in a business award speech without attribution.)

Unfortunately, “The Founder” often articulates its ideas in a tedious way, by having its characters deliver reams of exposition (some of it aided by documentary footage and old photos) in place of real conversations. The first third of the film is so thick with slide-show storytelling that it plays like a celebratory video that could be screened at a convention of McDonald’s franchisees. The film also has such trouble integrating the business story with Kroc’s tumultuous personal life—he divorced Ethel for a younger woman named Joan (Linda Cardellini)—that its women end up being defined by their level of support for Kroc’s vision. The McDonald brothers are secondary characters, too, but they’re fleshed out as individuals. You can picture their lives apart from (and before) Kroc. That’s not the case with Ethel (a wet blanket, despite Dern's best efforts) or Joan (who likens Kroc to Alexander the Great not as a warning but as a compliment).

Had "The Founder" focused solely on Kroc’s relationship with the McDonald brothers, it might have been one of the great intimate, sour character studies of recent times. All the stuff with Kroc on the road acting like a beleaguered Jack Lemmon character and the scenes with his first wife nagging him and second-guessing him feel like attempts to will a three-dimensional, somewhat sympathetic biography into existence, even though the material resists it. The nagging suspicion that the filmmakers could not help but succumb to the charisma of Ray Kroc (or Michael Keaton?) lingers through the final stretch of “The Founder,” which tries to visualize a hypnotic emotional void in the spirit of “Raging Bull” or “There Will Be Blood" without laying the proper groundwork for it. (This film could have been titled “There Will Be Beef.”)

Still, I’d be lying if I said I hadn’t thought about "The Founder" constantly since seeing it. It's possible that a sharper, bleaker, more articulate film might not have resonated as strongly as this messy, self-canceling one. It's an ad that becomes a warning before circling around and becoming another, darker kind of advertisement, and one of the most intriguing and surprising things about "The Founder" is that, in the end, it seems vaguely ashamed of itself for letting this happen. Kroc steals the movie from Hancock and Siegel just like he stole McDonald's from the McDonald brothers. I guess you could say it stole my objections, too. I left the theater with a bad taste in my mouth. Then I went to McDonald’s for the first time in over a year and ordered a Quarter Pounder with cheese and a vanilla shake. 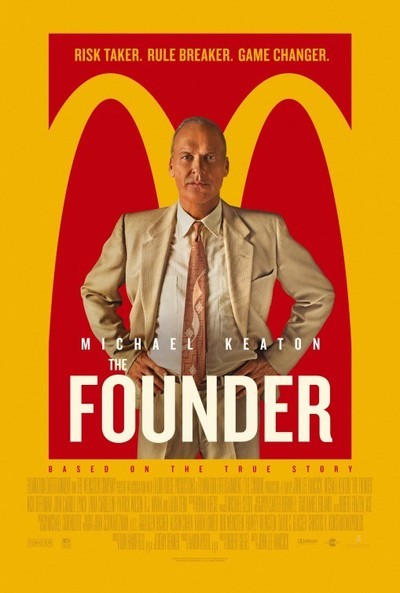 B. J. Novak as Harry Sonneborn