My favorite scene in any Godzilla film occurs in 1964's "Mothra vs. Godzilla." Two men in a house fight over money. One gets the better of the other, then looks up and sees Godzilla on the horizon, heading right towards them. It doesn't matter that the men and the house are full sized and Godzilla is a guy in a monster suit trampling a miniature landscape. The shots are fused by deft edits, terrified reactions, and little production details that help sell the illusion, like the tree branches in the middleground of the shot of Godzilla advancing. You're in that moment. In that house. In the path of a monster.

Gareth Edwards' 2014 "Godzilla," a brilliant reimagining of an old story, takes its cues from that great scene, and from the 1954 original's Hiroshima-and-Nagasaki inspired tracking shot past a row of bloodied hospital patients, and the camcordered immediacy of "Cloverfield," and the gas station sequence in Alfred Hitchcock's "The Birds," and the Do Lung Bridge sequence of "Apocalypse Now," in which American soldiers' enemies are distant silhouettes, shooting flares and shouting obscenities. These moments are all about perspective and point-of-view—not just what you're seeing but how much, and under what circumstances.

"Godzilla" is about that, too. It's less interested in a giant monster's rampage than in what it might feel like to be a human watching it from close up, or far away, or on a television set. It is not about Godzilla or the beasts that he fights. Like the 1954 original, it's a combination epic horror film and parable of nature in revolt, filled with odd ellipses and surprising but appropriate storytelling choices, such as a monster duel that plays out mainly on CNN.

"Godzilla" doesn't just show. It unveils. It builds sequences gradually, withholding important information until the end of a scene or sequence. In the spirit of the first few Toho pictures, every incarnation of "King Kong," Steven Spielberg's sci-fi and suspense pictures, and the original "Alien,"  the film reveals its beasts striptease-style, partly obscuring them with catwalks, cranes, window frames, TV monitors, and the like, and illuminating body parts with spotlights or flashlight beams: a leg here, a proboscis there. Edwards’s style is assured enough to toss off shots that lesser films would showcase on their posters. A newborn creature's progress from a subterranean egg chamber to the ocean is conveyed in a slow tilt-up that reveals a zigzag ditch joining mountains to sea. An impending fight between nuke-eating, electrically charged kaiju is foretold by a rolling blackout that turns a city's lights out one neighborhood at a time. Commandos on a city rooftop fire flares into darkness; the camera traces their arcs through smoky blackness until the flames illuminate Godzilla's torso, framed from neck to solar plexus. In these moments and others, Edwards contrasts the smallness of the humans against the hugeness of the beasts.

This "Godzilla" is a mural movie, and it's a good idea to remember that as you watch it. To appreciate  what it's doing, you have to take a step back. The movie has a likable international cast, including Bryan Cranston and Juliette Binoche as married nuclear physicists, Ken Watanabe and Sally Hawkins as scientists who've devoted their lives to studying ancient monsters and searching for Godzilla; Aaron Taylor-Johnson as their son, a war veteran and explosives technician;  Elizabeth Olsen as his wife, a nurse; and David Strathairn as an admiral. All the characters have simple goals and strong emotions, and they never feel awkwardly shoehorned in, as humans in kaiju flicks often do. But the film still sees them as representatives of an endangered species rather than complex individuals. Don't get attached to any of them. They are deployed in a metaphorical or dreamlike capacity, like the kaiju. For all their sincere distress, they're about as deep as characters in a Toho movie. None have the melodramatic spark you'll find in last summer's robots-vs.-kaiju action thriller "Pacific Rim," a grandly silly adventure so invested in its characters that it spawned a dramaturgical test.

I'd give the movie serious demerits if it weren't so skillfully directed; if the "all the world's a stage, and we are mere extras upon it" philosophy weren't characteristic of giant monster films as a genre; and if the filmmakers didn't go out of their way to make the humans' marginal status an integral part of the film's world view—something along the lines of: We're guests here, and we can be snuffed out or kicked out at any moment. The humans in this movie could certainly be squashed without warning, and the threat doesn't feel abstract. Unlike "Star Trek Into Darkness," "Man of Steel" and other recent blockbusters, this one's aware of the devastation and death that would accrue if its scenarios were real. Lots of people die in this one, onscreen, screaming. “Thousands Feared Dead,” says a cable news headline at the end.” A battleship's bulkhead door slams shut, ending a conversation, and the movie cuts to a character being zipped up in a body bag. That's all, folks.

Relativity of scale is a motif, and it's articulated with wit as well as awe. "Godzilla" focuses many showpiece action scenes around the reactions of kids, to whom adults can seem like gods or monsters, especially when they're not thinking about the devastation that their dramas inflict on smaller creatures. The rampaging kaiju turn even the most capable adults into toddlers gazing up in astonishment. A bravura sequence where monsters fight in Honolulu is anchored to the reactions of three children: a girl who watches ocean tides retreat in advance of Godzilla rising to flood and wreck the city; a boy separated from his parents and trapped on a monorail that's been de-powered by warring kaiju, clutching a plastic action figure given to him by an adult man; and another boy sitting on a couch in a San Francisco apartment, watching the event on TV.

The sheer filmmaking craft on display here shames almost any comparably budgeted superhero picture you can name. "Godzilla" borrows lovingly from Spielberg's "Jaws," "Close Encounters of the Third Kind" and "War of the Worlds," as well as from earlier popcorn classics that shaped Spielberg. Cranston's character has the surname Brody, like the sheriff in "Jaws," and in terms of plot function he's basically Roy Neary from "Close Encounters" but with a big promotion: where Roy was a middle-class electrician employed by an Indiana power grid, Brody is a nuclear physicist married to another nuclear physicist (Juliette Binoche), and both are employed by a power plant in Japan. The curtain-raising disaster transforms him into a traumatized seeker, chasing his own version of Roy Neary's Devil's Tower vision. His son grows up to become a stoic man-of-few words type. He's named Ford, as in Harrison (Spielberg's favorite leading man) and John (one of his directorial inspirations).

Edwards and screenwriter Max Borenstein are similarly on-point in situating the film's action. It happens along an axis joining the Eastern Pacific (Japan and Singapore) to the Westernmost American states (California and Hawaii). The choice of Honolulu as a key locale is perfect, summing up the East-meets-West nature of this blockbuster. The city is near Pearl Harbor, where the Japanese navy attacked the United States, and it became the administrative launchpad for the American Navy to project its retaliatory power onto the Pacific, culminating in the use of nuclear weapons against Hiroshima and Nagasaki, which killed hundreds of thousands of people in 1945, and inspired Toho Studios to create the original Godzilla nine years later. The climax takes place in San Francisco, the most Asia-facing of major American cities. Americans’ atomic explosions in the Pacific are revealed to have been attempts to kill Godzilla during an initial sighting, but it was the American use of nuclear bombs in Japan that awakened Godzilla in the first place. Every aspect of this story is a seemingly endless cycle of provocation and retaliation: by monsters and humans, by the ancient world and the modern.

While "Godzilla" is less of a satisfying human drama than a metaphorically and sociologically charged sound-and-light show, it's got a good heart. It's tough, but never glib or cruel. Even when Godzilla is rising from the sea to flood and crush cities, the film never becomes a mere display of special effects prowess. We're aware that Godzilla and his foes are animals—parts of a long gone, pre-prehistoric ecosystem, like the real creatures that dot the movie's margins: bats, birds, iguanas, dogs, wolves, beetles. There's a bit of H.P. Lovecraft in how the script turns the kaiju into mythic reminders of humanity's youth, smallness, and impotence, and a touch of Terrence Malick's Transcendentalist humility in how the director pauses to appreciate meadows and forests and rolling waves. (The final shot evokes "The Thin Red Line." Yes, really.) There's surreal humor, too, as when two kaiju seem about to share a warhead like the "Lady and the Tramp" dogs sharing a meatball.

"Godzilla" represents a high water mark (pun intended) in Hollywood's nearly forty year crusade to inflate once-disreputable genre flicks into monumental pop art that demands respect and contemplation. The wide shots of kaiju grappling in ruined cities are gloomily magnificent, like oil paintings of Biblical miracles. The ships, trains, jets, skyscrapers, highways, and railways might as well be elements in a diorama, or toys in a child's playroom. Just because this movie is playful doesn't mean it's trite. It is serious science fiction, and has a lot on its mind.

After a while, the sight of soldiers firing machine guns and grenade launchers at mountain-sized critters turns tragic, then hilarious. They might as well be setting off firecrackers. Someone should cut a video that weds "Godzilla" disaster footage—bridges snapping, skyscrapers crumbling, jets falling from the sky—to George Carlin's "Save the Planet" rant: "We’re going away....and we won’t leave much of a trace, either...The planet’ll be here and we’ll be long gone. Just another failed mutation. Just another closed-end biological mistake. An evolutionary cul-de-sac. The planet will shake us off like a bad case of fleas." 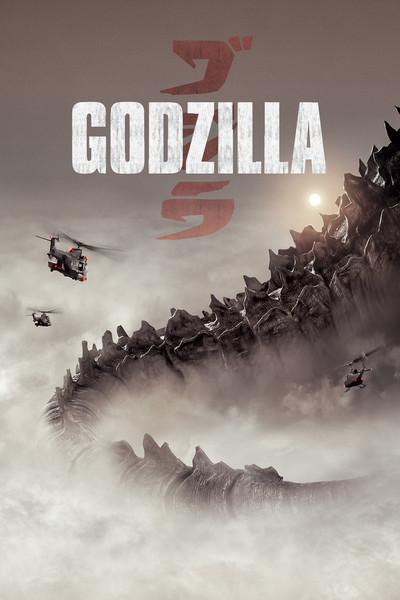