Will bustin’ make you feel good all over again?

Or are you so worried that the lady-fied “Ghostbusters” reboot will ruin your precious childhood memories by infecting them with cooties to even consider buying a ticket?

How yet another example of Hollywood feeding on its past rather than enriching its present with original concepts became as contentiously political as this year’s presidential race is beyond me, even if there are countless male-written thinkpieces out there that attempt to explain it.

To those who are disturbed by this remake, let it be known that no one is burning all the DVD copies of the 1984 model. If you wish, you can easily re-watch Sigourney Weaver’s possessed Dana writhing around in bed while suggestively telling Bill Murray’s Venkman, “I want you inside of me” while Murray quips back, “It sounds like you've got at least two or three people in there already.”

But here is the rub. All this misplaced misogynistic hostility that has been sliming the reputation of director’s Paul Feig’s gender-reassignment redo (co-written with Katie Dippold, his partner on “The Heat”) has stirred the girl-power advocate inside of me. But, the reality is, there is perhaps one, maybe two moments that come anywhere close to being as memorable as that 32-year-old not-quite-family-friendly joke above. And that reality leaves me in the unhappy position of having to admit that this feminized attempt could have used a makeover itself.

What complicates matters even more is that I actually found myself chuckling within the first few minutes of the film. The source of my mirth, unfortunately, was not any of the four female stars. Instead, it was Zach Woods of TV’s “Silicon Valley”—he of the perpetually startled eyes—as a tour guide at a historic New York City mansion where the first threatening specter materializes. When he claims that the 19th-century structure’s forward-thinking owner installed such innovative features as a “face bidet” and “an anti-Irish security fence,” I laughed heartily.

Alas, such genuinely humorous opportunities arrive only sporadically throughout the rest of this experiment that attempts to combine ectoplasm and estrogen into an enjoyable summer comedy elixir. Actually, the problem isn’t so much that women are strapping on those upgraded ghost-zapping proton packs this time around. After all, when you put such formidable talents as Kristen Wiig, Melissa McCarthy, Kate McKinnon and Leslie Jones together in a room, something amusing is bound to happen. But if what occurs is a running gag on how McCarthy always gets shorted on wontons in her Chinese takeout, new heights of hilarity are going to be hard to come by.

Instead, the same weakness that has plagued a goodly portion of major releases this year that rely on past successes for their reason to exist rears up again: the lack of the new and fresh. And what is different isn’t different enough or somehow seems a diminishment. Wiig’s Erin, a Columbia University physics professor, is pulled back into her suppressed paranormal research past when she reunites with McCarthy’s Abby, an estranged childhood chum and fellow ghost chaser, after long-dead apparitions begin to wreak havoc on Manhattan. Joining them are McCarthy’s human Looney Tune gadget-whiz partner Holtzmann (McKinnon, who is a gas, gas, gas and then some) and history-buff subway worker Patty (Jones, who does a fine job of keeping the bustin’ real and physical).

Meanwhile, instead of restless Babylonian gods, there is a human nut-job villain (Neil Casey)—who seems to have studied bad-guy Syndrome from Pixar’s “The Incredibles”—summoning these filmy monsters in order to bring about an apocalypse with all the CGI overkill that 21st-century technology can deliver. But as anyone who subjected themselves to “Independence Day: Resurgence” knows, mass destruction of major cities isn’t as much fun as it used to be.

What really galled me was the attitude that these supposedly brilliant and successful women are forced to assume. While nerdy wise guys Murray, Harold Ramis and Dan Aykroyd never questioned their belief in afterlife inhabitants or wavered in their confidence to control them despite a raft of skeptics, she-geeks Wiig and McCarthy are cowed into playing misfits who were shunned by others because of their spooky interests when they were young girls, and are now emotionally damaged goods trying to prove themselves right. All I know is I don’t want my funny gals muted. I want them full blast.

Enough with the so-so. Let’s celebrate McKinnon’s ability to sneak into the corners of scenes and force us to watch her. All it takes for her to rivet us is a flirtatious wink of her eye, the slow curl of her lascivious lips or the enthusiastic munching of a container of Pringles—or “salty parabolas,” as she calls the chips—that seems to materialize out of nowhere. Imagine Harpo Marx combined with a yellow-lens-goggles-wearing Minion who somehow confuses the ‘80s R&B group DeBarge with far-out Devo and see if you aren’t already giggling to yourself.

And cheers as well for good-sport Chris Hemsworth, who helps the lasses engage in a bit of deserved reverse sexism as Kevin, a bespectacled blond himbo hired as an office receptionist who can barely answer a phone but can inspire this reaction: “Who ordered the Clark Kent stripper-gram?”

I suppose it was inevitable that in the age of YouTube the filmmakers would seize the opportunity to have a commenter mock an online video of a ghost capture with the observation, “Ain’t no bitches gonna hunt no ghosts” while the women react with appropriate scorn. But I would have preferred that they simply had shut their naysayers down by producing a better movie. 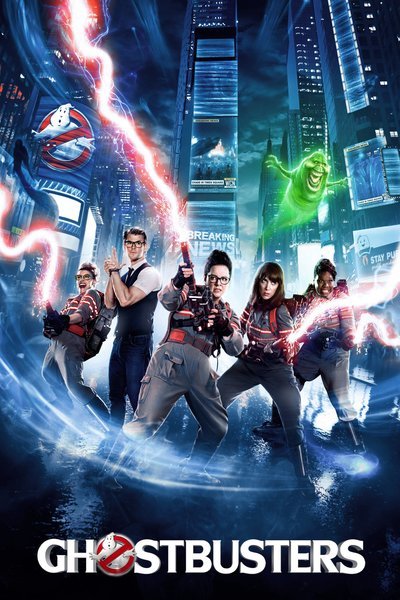 Rated PG-13 for supernatural action and some crude humor.

Writer (based on the 1984 film "Ghostbusters" written by)