2019 is becoming the year of the CGI-faced actor. After computer based de-aging technology took decades off the cast of “The Irishman,” “Gemini Man” has employed this same technique to turn “Collateral Beauty” Will Smith into “Six Degrees of Separation” Will Smith. Granted, the F/X folks had to pull fewer decades off the Fresh Prince, so the effect looks a bit better. Plus they gave his younger stand-in much sharper cheekbones than he had in 1993, an enhancement that wasn’t necessary but was probably welcome. Director Ang Lee’s sci-fi actioner uses even more CGI to pit Young Will against Old Will in a convoluted plot about assassins, corrupt intelligence agencies and the old stand-by that’s currently getting beaten to death by “Ad Astra,” daddy issues.

Quite honestly, I didn’t know what to think of “Gemini Man” once the credits started rolling. I neither hated it nor liked it. Well, I hated one aspect of it, which I should get out of the way now because it will probably not affect most ticket-buyers. Paramount presented the critics’ screening in the format Ang Lee made it, 120 frames per second and in 3-D. Lee’s prior film, “Billy Lynn’s Long Halftime Walk,” also used this frame rate. As a point of reference using a more familiar movie, “The Hobbit” series ran at 48 frames per second. At five times the original rate of film running through the projector, “Gemini Man” looks radically different than most movies. It also looks astonishingly bad. Tom Cruise, Paramount’s current bread and butter, made a video scolding mere mortals like a Southern grandmother for using the motion smoothing setting on their televisions. Yet 120 frames per second looks exactly like motion smoothing. In fact, it looks worse, like a hellish cross between a video game and a telenovela. It’s so obnoxious that I know of two critics who walked out after 30 minutes.

Story-wise, Smith plays Henry Brogan, a highly skilled assassin working for an intelligence agency run by Janet Lassiter (Linda Emond). Brogan is so good he can hit a target on a moving train from hundreds of feet away. A target on a train whose tracks curve wildly toward the screen as it flies by at unimaginable speed. Brogan’s mark takes it in the neck rather than the intended head shot, and though it’s still a lethal wound, Brogan sees this as the final nail in the coffin of his career. He retires, returning to a boat dock where his normal boat renting guy has been replaced by Danny Zakarweski (Mary Elizabeth Winstead). As spies are wont to do, Brogan expresses suspicion about this change. Is she a plant sent to keep tabs on him, perhaps an employee of Lassiter’s frenemy colleague Clay Verris (Clive Owen)?

Of course, nothing is as it seems in movies like this. After colleagues start being murdered and Brogan learns that his last target was merely a scientist and not a terrorist, he goes on the run with Danny who, as expected, is also an agent. When Lassiter’s attempts to neutralize Brogan fail miserably, Clay overrides her and executes something called “Gemini.” You don’t have to be an astrologer to know that Gemini involves the aforementioned younger version of Smith, dubbed Junior. Lee does an excellent job with Junior’s reveal and the ensuing motorcycle battle, the most exciting sequence in the film. The first-person perspective really works here, as does the clever way the Smiths use their vehicles as weapons. Lee even throws in an homage to John Woo (who would have been a better choice for this material), though he uses pigeons instead of doves.

“Gemini Man” knows you’re there to see a battle of Wills, so it gives us multiple sequences where 51-year old Brogan goes toe-to-toe with his younger self. The elder Brogan has the advantage; the wisdom of age and experience prevents him from making the same youthful mistakes he once made, mistakes Junior is making for the first time. Unfortunately, the second battle takes place in a dark catacomb where the effects are so quickly edited that you can’t figure out which version is beating the hell out of the other. It also takes forever for Brogan to realize that Junior looks exactly like him. Maybe it’s the new cheekbones.

The screenplay by Billy Ray, Darren Lemke and “Game of Thrones”’ David Benioff is more in service to the numerous technological aspects Lee is juggling than any human element. It uses Brogan’s intentionally closed-off, emotionless personality as a crutch to avoid any meaningful fleshing out of characters and relationships. The always-welcome Benedict Wong shows up to supply his usual humorous line-readings and jovial nature—he’s a fine purveyor of the perfect best friend trope—and Winstead gets to kick some major ass instead of being a stereotypical girl Friday, but neither truly registers as a fully realized human being. The relationship between Junior and Clay (which I won’t reveal) serves as an attempt at emotional connection, but their entire plotline plays like a Hitler-less version of Ira Levin’s “The Boys From Brazil.” The reasoning behind Junior and the Gemini project is far more trouble than it is worth.

“Gemini Man” never pretends to be anything but a time-wasting contraption hoping to entertain its viewer. I can’t reasonably be mad at its honesty, and despite the horrendous dialogue its actors are often forced to speak, I found myself enjoying a fair amount of it. But Ang Lee is the rare director who can invest an action movie with the same strong emotional heft he brought to his dramas like “Brokeback Mountain.” “Crouching Tiger, Hidden Dragon” is a great example of this. His recent desire to be at the forefront of frame-based technology, however, is resulting in hollow, empty experiences that are literally hard to watch. Perhaps the Gemini project could be used to send the Ang Lee who made “The Wedding Banquet” to visit the Ang Lee who made this. Break his high-frame rate camera, Junior. 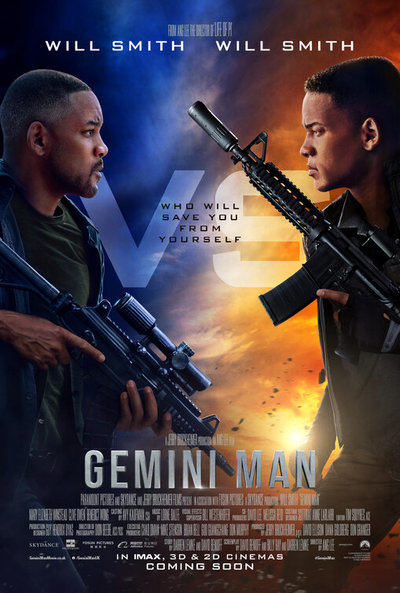 Will Smith as Henry Brogen