Grief is a prevalent theme at the movies right now. Such diverse titles as “Manchester by the Sea,” “Jackie” and “Arrival” come at the difficult topic from wildly different angles—personal, political and otherworldly. But they all manage to justify their use of dead loved ones as a generator of not just emotion, but of understanding about what happens in the aftermath of such great loss.

Now along comes “Collateral Beauty” to spoil it all by milking bereavement for shoddy bromides and cheap tears. Not that this knockoff Hallmark special doesn’t go out of its way to camouflage its ill-conceived intentions as well as the considerable debt it owes to such seasonal chestnuts as “A Christmas Carol” and “It’s a Wonderful Life.” Director David Frankel (canine cry-a-thon “Marley & Me”) and writer Allan Loeb (the scribe behind such DVD bargain-bin dwellers as “Wall Street: Money Never Sleeps,” “The Dilemma” and “Rock of Ages”) provide plenty of fancy window dressing, including a stellar cast and a fantasy Manhattan festooned with twinkly Christmas lights, pine limbs and dirt-free curbside snow.

Call me cynical but I always get suspicious when an acting ensemble feels incredibly star-stacked. It’s a sure sign of over-compensation. Consider that “Collateral Beauty” features two Oscar winners (Kate Winslet and Helen Mirren), three Oscar nominees (Will Smith, Keira Knightley and Edward Norton) and a current Golden Globe nominee, as well as a likely future Oscar contender (Naomie Harris of “Moonlight”) in a pear tree. Even such second-tier players as Michael Peña and Ann Dowd carry some considerable cachet.

Sometimes, I just hate it when I am right.

Let’s start at the beginning. There is the Will Smith that we know and love, with that dazzling smile and oodles of manly self-confidence. He is rallying the troops at his successful ad agency by asking the pseudo-profound question, “What is your why?” I would respond, “What is the what?” But his character Howard, instead, says, “Time, love and death. These three things connect every single human being on Earth. We long for love. We wish we had more time. And we fear death.” Deep, right? Wrong.

OK, then. It is three years later, and Howard is a shell of a man, alone, silent and empty after the death of his six-year-old daughter from a rare disease. He spends his days in his office constructing elaborate mazes using a platoon of domino tiles, only to knock them all down in one fell swoop and start over (at this point, “Warning: Metaphor Ahead” should flash onscreen). At night, in his monk-like apartment, he writes bitter diatribes railing at Time, Love and Death, and then actually mails these notes to their subjects, complete with stamps but no address.

His business partners, played by Winslet, Norton and Peña, are understandably nervous because Howard was the charismatic force driving the agency and is the majority shareholder. With sliding profits, they want to buy him out, but he refuses to discuss such details in his withdrawn state. Norton is so concerned that he hires a private investigator (Dowd) to spy on Howard, and she manages to retrieve his three notes from a mailbox, illegalities be damned.

Then, magically, Norton stumbles upon a solution when he is taken with an attractive young woman auditioning for an ad (Knightley) and decides to follow her across the street to a theater. There, he finds her rehearsing a play with a young man (Jacob Latimore) and an older white-haired lady (Mirren) and decides, hey, let me hire you three to act as the human incarnations of Time, Love and Death, and make Howard completely nuts so we can prove he is unstable and save our company. Mirren, who remains relatively unscathed despite being forced into sassy senior mode, has second thoughts. In one of the more timely asides in the script, she asks if Norton’s character wants the trio to “gaslight” Howard. But as desperate thespians are wont to do, they all agree so they can fund their play.

Of course, it isn’t as simple as that, considering how much attention is paid to the personal travails facing divorced dad Norton, childless workaholic Winslet and a cough-riddled Peña as well. By the time Howard starts opening up to a grief counselor (Harris), who also lost a daughter to disease, there is a growing sense that funny business is afoot and not in a good way. Sure, there are up-to-date references to hard-to-get “Hamilton” tickets and Norton jokingly observes, “Now they have ’CSI: Cleveland’?” to his dementia-suffering mother while watching TV. But these asides are simply distractions from what appalling twists lie in wait.

I don’t think I've witnessed a film this year that managed to so completely and utterly collapse into crass garbage in its last few minutes while abusing what little goodwill it has. Sort of the way a shaky line of dominoes can tumble down in a flash. Forget “Collateral Beauty,” whatever that means. This is “Collateral Schmaltz,” the kind that has the power to close rather than open your heart as you rush out of the theater while the terribly named OneRepublic ballad, “Let’s Hurt Tonight,” provides exit music. 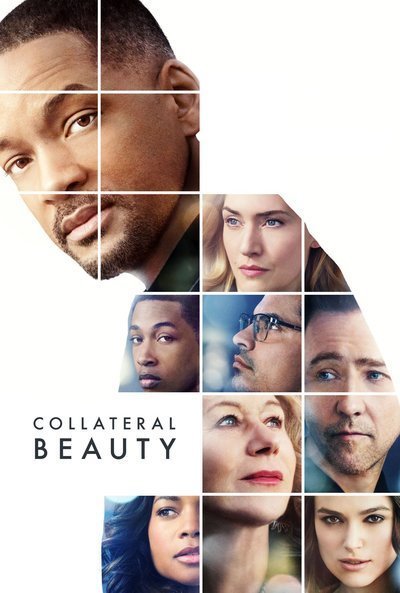 Will Smith as Howard Inlet