The opening credits for “Gemini” run over images of upside-down palm trees, cast in blue twilight. As the title fades out, the camera slowly tilts downward, bringing us back to earth. We’re in Los Angeles and bluesy music by Keegan DeWitt sets a romantic tone reminiscent of John Williams’ theme for “The Long Goodbye.” In much of the same tradition of Robert Altman’s neo-noir classic, director Aaron Katz revives Los Angeles as a renewed film noir locale, this time in the era of smartphones and millennials. Focused on celebrity and bodily autonomy, the film is centered on a Hollywood Starlet, Heather (Zoё Kravitz), and her personal assistant, Jill (Lola Kirke), who find their lives altered due to a horrific crime.

In the film’s opening scene, Jill receives a phone call from Heather’s jilted ex. He threatens to kill Heather, a promise that Jill relays to her boss with a casual coolness. Heather seems unfazed and is far more preoccupied with her decision to bail out of an upcoming film. By the time Heather and Jill return home that night, they will have encountered at least four people who might wish Heather harm. The actress, paranoid and afraid for her life, asks to borrow Jill’s gun: A choice that Jill will later regret.

“Gemini” has a breezy lethargy and the characters always look on the brink of sleep. With a cobalt and ultraviolet color scheme and a jazzy score, the movie seems to be cast in the dreariness of Hollywood dreams. Fear pierces through the somnambulist environment, as the characters grow increasingly paranoid over being constantly under surveillance. Unlike previous decades of noir, this takes on new significance in the era of TMZ and Instagram. The film redefines the idea of the California experience as living through a filter, as typical American stomping grounds are redesigned for a hyper-connected world.

Early on in the film, Jill and Heather are at a diner. It is decorated with neon signs, celebrity photos, and retro waitress outfits. It is self-aware kitsch, orchestrated to be hip and social media ready. When taking an order, the waitress asks if they would like some “apps, you know appetizers,” a kind of too-hip function of a place designed for influencers. As Heather steps outside for a moment, a young fan slides into the booth across from Jill. She has an uncanny resemblance to her favorite star, they even have the same distinct haircut with shaved sides and long, tight braids. Jill tries to get her to leave, but the wide-eyed ingenue wants to be a part of her favorite star’s orbit. When Heather returns, she gently agrees to a photo but things turn quickly sour, when the fan, with a bright beautiful smile, asks a question that oversteps all normal interpersonal boundaries.

More than ever, the idea that a celebrity can have a private life seems eroded. Social media, in particular, has shaken away the idea that there exists a public and private persona. Even after being offended by the fan at the diner, Heather goes and tries to find the photo on Instagram to make sure she looks good. The film’s first act is preoccupied with Heather being overwhelmed by her desire to control her public image. Her decision to temporarily back away from acting seems to be rooted in an anxiety that her image has been worn down, rendered unfamiliar and unrecognizable.

The film as a whole is more engaged with Jill, Heather’s personal assistant. In “Gemini” Kirke plays a character who serves as a background player and is suddenly thrust into the action and spotlight. Uncomfortable with this new attention, she begins changing her habits and even her appearance. Self-erasure, as it connects to femininity, is one of the most integral themes in the representation of the millennial experience, also at the forefront of films like “Spring Breakers,” “Mistress America” (also starring Kirke) and “Ingrid Goes West.” They are films where individuality is fractured and erased, replaced with a kind of artificial play acting of melded spirits and shared identities. A safety exists in these new identities, as they are exempt from real emotions or consequences.

However, this representation of living in the new age is tinted with an uncomfortable cynicism. Most of these portraits of the female millennial experience in the 2000s suggest the experience of being a woman as malleable and uncertain. The films do take pains to represent the world in which a woman might want to stop existing but does so with a hint of desire. Unsurprisingly, even within the wider scope of persona swap films (a term coined by Miriam Bale), most of these representations are taken on by men, who inject their points of view with a creeping desire. Women are represented as mysteries, unknowable creatures with the ability to absorb their surroundings and adapt to new faces. There is an uncomfortable eroticism to these representations, that suggests that the malleability of femininity can be geared towards a perfect, if vacant, iteration of male desire.

“Gemini” might question the nature of celebrity in 2018 but does not really subvert it. At its best, the film has a dreamy atmosphere with compelling performances. Along with its twisted sense of humor, there is no doubt that the film is more than just a monochromatic Pinterest mood board. And yet, it doesn’t really push things to the next level either. It relies on insinuations and mystery to carry the audience, without questioning the nature of a society reimagining itself as a large set of social media images and stolen identities. 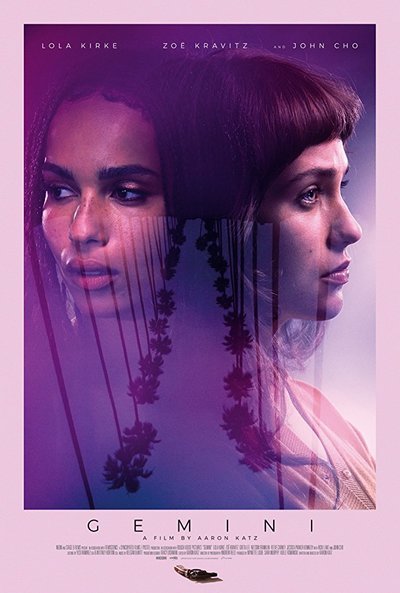 Rated R for pervasive language, and a violent image.