The men in "Tomcats" are surrounded by beautiful women, but they hate and fear them. That alone is enough to sink the film, since no reasonable person in the audience can understand why these guys are so weirdly twisted. But then the film humiliates the women, and we wince when it wants us to laugh. Here is a comedy positioned outside the normal range of human response.

The movie belongs to an old and tired movie tradition, in which guys are terrified that wedding bells may be breaking up that old gang of theirs (only last week we had "The Brothers," an African-American version of the theme, but gentler and nicer). There is always one guy who is already (unhappily) married, one who is threatened with marriage, one who claims he will never marry and then the hero, who wants to marry off the unmarriagable one, to win a bet. This plot is engraved on a plaque in the men's room of the Old Writers' Retirement Home.

The twist this time: The guys all agree to pay into a mutual fund. The last one still single collects all the money. The fund quickly grows to nearly $500,000, so their fund must have bought hot tech stocks. (In the sequel, those same stocks--oh, never mind.) The guy who vows never to marry is Kyle (Jake Busey). He likes to take his dates golfing and run over them with the cart. They bounce right up and keep smiling. The guy who wants to collect the money is Michael (Jerry O'Connell). He comes into a valuable piece of information: Kyle met one perfect woman, cruelly dumped her and has always wondered if he made a mistake. Michael tracks down the woman, who is Natalie (Shannon Elizabeth), and enlists her in his scheme. She'll seduce and marry Kyle and get her revenge--oh, and she wants half the money, too.

The complication, which is so obvious it nearly precedes the setup, is that Michael and Natalie fall for each other. This despite the fact that by going along with his plan, she reveals herself as a shameless vixen. The movie then runs through an assembly line of routine situations, including bad jokes about S/M and a proctologist who suspects his wife is a lesbian, before arriving at a sequence of astonishing bad taste.

Read no further if through reckless wrong-headedness you plan to see this movie. What happens is that Kyle develops testicular cancer and has to have surgery to remove one of his testicles. During recovery he develops a nostalgia for the missing sphere and sends Michael on a mission to the hospital's medical waste storage room to steal back the treasure.

Alas, through a series of mishaps, it bounces around the hospital like the quarry in a handball game, before ending up on the cafeteria plate of the surgeon who has just removed it, and now eats it, with relish. The surgeon is played by that accomplished actor David Ogden Stiers, my high school classmate, who also does Shakespeare, and probably finds it easier.

The movie has other distasteful scenes, including a bachelor party where the star performer starts with Ping-Pong balls and works up to footballs. If the details are gross, the movie's overall tone is even more offensive. All sex comedies have scenes in which characters are embarrassed, but I can't remember one in which women are so consistently and venomously humiliated, as if they were some kind of hateful plague. The guys in the movie don't even seem to enjoy sex, except as a way of keeping score.

"Tomcats" was written and directed by Gregory Poirier, who also wrote "See Spot Run" and thus pulls off the neat trick, within one month, of placing two titles on my list of the worst movies of the year. There is a bright spot. He used up all his doggy-do-do ideas in the first picture. 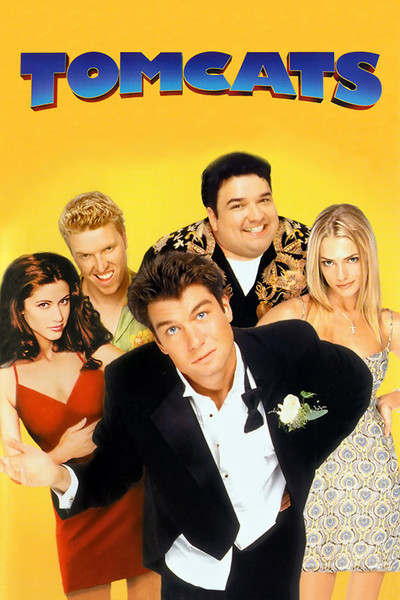 Rated R For Strong Sexual Content Including Dialogue, and For Language