Walking along in the woods—perhaps alone, perhaps with a friend, human or canine—you spot a tiny flash of color that doesn’t belong. The precipitate silvery brightness of a lost spoon. The too-vivid red or orange of a plastic toy, abandoned. Maybe the friend, if they’re of the canine variety, spots or sniffs something out of place and begins to worry at it, shaking off the leaves and soil and years that have built up around it since it was dropped or set down. Through one lens, such things are garbage, destined for the nearest bin. Through another, they’re a piece of some unknown story, playing out in some other time. Someone makes such a discovery in the earliest moments of Kelly Reichardt’s transfixing “First Cow”—and yes, a good dog is involved—but the nature of the discovery makes it impossible to deny that second lens. The story cries out from the soil, the echoes of the past reverberating forth from the pristine whiteness of bone. Two skeletons lie in the earth, curled together as if still seeking warmth. There’s a story there, alright.

“First Cow,” adapted by Reichardt with frequent collaborator Jonathan Raymond from the latter’s novel The Half Life, is many things. A simultaneously gentle and unsparing dissection of the formative flaws of capitalism, and thus of the “American dream”; a frontier story which captures the harsh realities and simple pleasures of a life built painstakingly from rock, wood, and soil; a heist movie; an argument for the power of baked goods. It is somehow both brutal and pastoral, peaceful and laced through with the inevitability of disaster and death. (Nothing fragile can hold forever—not a tree branch, not a ruse, not luck, and not peace, no matter what William Tyler’s beautiful, serene score might trick you into believing.) But above all else, it is a story of friendship, treated here as a haven and basic human need, as essential as water or bread. The film begins with a quote from William Blake’s “Proverbs of Hell”: The bird a nest, the spider a web, man friendship. And those bones are, for the viewer as well as the woman (Alia Shawkat) who finds them, both an invitation and a door into that friendship.

When Cookie Figowitz (John Magaro, “The Big Short”) first encounters King Lu (Orion Lee, “A Brilliant Young Mind”), it’s in a moment that would, in most films, lead to a chase, gunshots, disaster. The bullied, forlorn cook for a group of rowdy prospectors making a slow journey west, Cookie is searching the woods for anything edible, anything at all. He finds mushrooms, but he also finds a man, naked and shivering, who calmly and quietly asks if the cook is about. The cook is about, and he does not scream, or pull a gun, or alert his brutish traveling companions. Instead, he offers food, warmth, shelter, and if he can manage it, safe passage. How it’s managed and what happens in those hours is mostly left to the imagination, and that’s true of much of “First Cow”; like the traveler in the woods who stumbles upon a story, you’re asked to fill in some blanks yourself.

One of those blanks exists between that first meeting and their second, when the fortunes of both men are somewhat reversed. The circumstances are very different, but the offer is the same: food, warmth, shelter, and this time, companionship. Cookie and King Lu begin to build a life side by side, rather than alone, fishing and building and working in affable silence. Reichardt shows us what both men want through the small choices they make: Cookie arrives at King Lu’s small, fragile cabin and immediately sets to work sweeping, tidying, gathering wildflowers to place in a small bottle on a smaller shelf. His friend encourages him, gently, to sit down, rest, and feel at home, but never tells him to stop in the way you might tell a guest to simply leave the dishes. Both seem to know that from that moment forward they are a pair, and through Lee and Magaro’s simple, quiet performances, we watch them build and cherish their new status quo.

But the name of the film is not “Frontier Friendship,” and the arrival of the titular cow eventually shifts Cookie and King Lu out of their peaceful haven. The first cow is also the lone cow, as her mate and calves died in transit to the wilds of Oregon, and Reichardt and cinematographer Christopher Blauvelt film her, particularly in that first shot, as though she were a unicorn or a dragon, practically glowing with some sort of internal magic or riches. Which, of course, is accurate—the cow’s arrival at the home of the Chief Factor (Toby Jones, quietly excellent) awakens in Cookie dreams of biscuits and cakes only possible with milk. And that’s when Reichardt begins to make “First Cow” the most tranquil and soft-spoken heist movie in the history of the genre. (It’s also where “First Cow” begins to seem like an ideal companion film for “Parasite”; programmers, get on that pairing ASAP.)

The cow alone doesn’t spur Cookie and King Lu into action. She may be the flint and steel, but it’s the promise of wealth, prosperity, success, and independence that’s the kindling. As stated above, this is a deceptively simple film, slowly and quietly moving through the Oregon forest and along the riverbanks while carefully juggling ideas and themes in its quick hands. Chief among these ideas is the notion that to really, truly secure a brighter future, you must wring every last drop (here literally) from the opportunities that present themselves, even if it means risking all you already have. Like many Americans before them, in life and in the voting booth, Cookie and King Lu act in the interest of a wealthy, secure future they don’t yet and probably never will have, protecting their future rich selves rather than their present, vulnerable existence. The second half of the film is powered by the dangerous, Icarian words “just one more,” and while Reichardt, a master of the tranquil, keeps us cocooned in the rough but beautiful natural world, she also slowly swells the tension by showing us, again and again, how these two gentle friends succumb to the power of those words.

The cabin slowly grows. In those gaps Reichardt leaves for us, it is filled with the tiny artifacts that make a place a home. But those aren’t the only gaps. We meet, briefly but repeatedly, characters played by a bevy of great character actors, including Gary Farmer, Lily Gladstone (also of Reichardt’s “Certain Women”), Dylan Smith, Scott Shepherd, Ewen Bremner, and the late René Auberjonois. We learn precious little about them, but there’s no need. Reichardt gives us just enough to begin imagining their stories: how the old man got a crow for a pet; the wry amusement of a wife translating for her vain husband; the tiny collection of possessions hoarded by a lonely guard; the fraying patience of a big man who just wants to sit with his tiny child.

She is, in her way, showing us the gentle curve of those skeletons, giving us the ingredients we need to imagine the lives of these people, the dreams they might entertain, and what ultimately becomes of them. By the time the film arrives at its ending—either open-ended or quietly but ruthlessly definitive, depending on your interpretation—she has trained us to see details as gateways to stories, connection as seed for friendship. Like the first cow, she supplies the vital ingredients. What we choose to do with them is up to us. 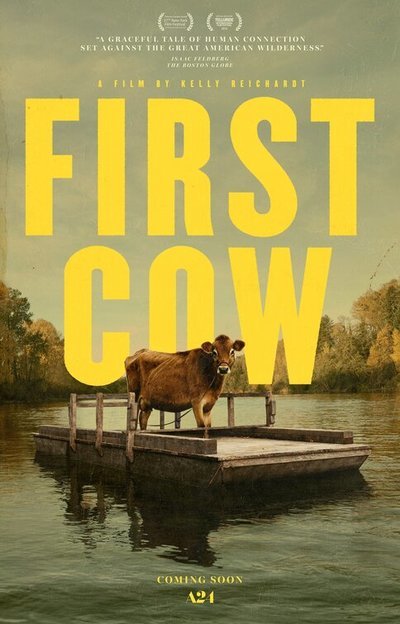