The title of Morgan Matthews’ “A Brilliant Young Mind” all too obviously echoes that of Ron Howard’s “A Beautiful Mind,” but although both films concern mentally challenged mathematics prodigies, they are otherwise almost exact opposites: where the 2001 multiple Oscar winner offered a compendium of Hollywood moviemaking strengths, this BBC Films import mainly serves up TV-style triteness and warmed-over clichés.

The new work belongs to that large group of films whose makers seem to assume they derive some benefit from assuring us that their fiction is “based on true events.” In this case, what’s meant is that it derives from a documentary previously directed by Matthews, “Beautiful Young Minds,” about a group of students preparing for the International Mathematics Olympiad (IMO).

From Jeffrey Blitz’s “Spellbound” on, kids-in-competitive-mind-sports films have become a documentary mini-genre unto themselves. And it may be that documentary is the best form for such stories, since no matter how many fictional tropes are used to shape them, they have the authenticity of showing us real people in actual situations. Replace those with made-up characters and invented conflicts and too often what’s most fascinating about the real material gets drowned in predictable dramatic contrivances.

That’s what happens in “A Brilliant Young Mind,” which is based on a cliché-clotted script by James Graham. We’ve barely been introduced to young Nathan Ellis (played as a nine-year-old by Edward Baker-Close) and his dad (Martin McCann), when the two jump into the family car and dad is killed in a collision. As the film keeps reminding us thereafter, dad was Nathan’s main emotional support, since he believed his introverted son’s fascination with primary numbers made him “special” rather than odd.

Lacking that support, and getting no similar comprehension from his eager-but-clueless mom Julie (Sally Hawkins), Nathan’s at loose ends till he finds a mentor in Martin (Rafe Spall), a teacher who understands his abilities and potential achievements as a math whiz. Naturally, since convention dictates that characters like this must have a troubled back story, Martin’s an alcoholic due to having botched the IMO himself years before.

Once the story skips forward a few years, Nathan (played as a teenager by Asa Butterfield) enters Act Two ready to ship off for an IMO-preparatory summer camp in Taiwan, where the U.K. kids are chaperoned by a focused, hard-charging teacher named Richard (Eddie Marsan). In Taipei, it becomes evident that the main competition for the Brits will come from the Chinese kids (all of whom, conveniently enough, seem to speak good English). For Nathan, this development gains a personal dimension when he begins to show incipient romantic interest in a female Chinese student, Jo Yang (Zhang Mei). (Linguistic note: The film and its press notes identify the actress surname-first, in traditional fashion, but do the opposite for her character. No explanation is given for this, though perhaps English-speakers are presumed to expect the character’s given name to come first.)

Of the many things that make “A Brilliant Young Mind” unsatisfying, arguably the most salient is that the assertion of its title defies dramatization. Nathan is brilliant? Well, if he were a footballer or a spelling-bee champ, we could see his skill as it evolved and played out. But since most filmgoers are not mathematics geniuses, the competition here must be reduced to furrowed brows, flurries of numbers flashed across the screen, and occasional swatches of unintelligible math-speech.

More dramatically problematic, though, is that, with one exception, Nathan’s relationships with people go nowhere. Whether it’s his mother, his father, his mentor, or his fellow students, there’s virtually no difference in how they relate to him between the first time we see them and the last. (The one exception, slight but pleasing nonetheless, is Nathan and Jo’s teen-crush.) As in other scripts with this weakness, a lack of dramatic development results in a great deal of  narrative padding: throughout, the film flashes back to child-Nathan’s interaction with his dad, or to Martin wrestling with his alcoholism, scenes which do absolutely nothing to advance the story but end up making the film, at 111 minutes, feel lumpy and overlong.

These flaws also have a negative impact on the film’s acting. Hawkins, a truly delightful performer in most circumstances, and Butterfield are both reduced to one-note performances due to the limitations of their characters as written: she’s got a single expression of chirpy eagerness, whereas his adolescent angst produces a single downcast look. Much better are Marsden and Zhang, who enliven their characters with a freshness and energy the protagonist lacks. For his part, Spall falls somewhere between: he’s got screen presence galore, though his character never gets beyond the two-dimensional.

Director Matthews has previously directed documentaries and “A Brilliant Young Mind” is his first foray into dramatic territory. Not surprisingly, his visuals have little compositional rigor or distinction, but often seem to stand at a middle distance in order to allow the actors room to move. No doubt he’ll expand and refine his stylistic vocabulary if he continues to work in drama, and, with luck, discovers better scripts. 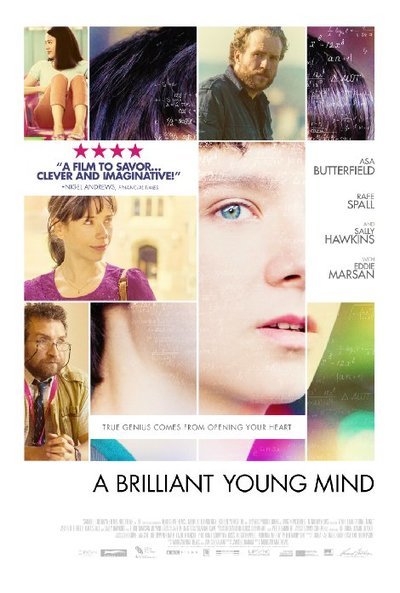