When it comes to senior-bait cinema that glorifies the act of seizing the day and taking second chances in one’s golden years, actors who hail from the United Kingdom are, in my semi-humble opinion, far more adept at the genre than their Hollywood counterparts. England produced the infectiously charming “The Best Exotic Marigold Hotel,” the crown jewel of these retiree ensemble pieces even if 1998’s “Waking Ned Devine” came first. Back in the old US of A, however, fellow Oscar winners Tommy Lee Jones and Morgan Freeman finally co-starred in “Just Getting Started,” and the result was a crude and crass career nadir for all concerned that was justifiably hidden from critics last December.

Part of the reason for this disparity? Britannia seems to possess a seemingly bottomless pool of drama-school-trained actors of a certain age who are fluent in Shakespeare and seemingly at ease with all mediums—TV, stage and film. Just consider the ensemble of elders from the “Harry Potter” franchise. Not to take anything away from Daniel Radcliffe, Emma Watson and Rupert Grint, but I was always gobsmacked by the ongoing parade of grown-up stalwarts occupying the halls of Hogwarts over eight films, from Richard Harris and Maggie Smith to Jim Broadbent and Emma Thompson. That is my kind of wizardly magic. Also, aging is much less of an anathema in a land that has been around for countless centuries and whose 91-year-old monarch has lately shown an admirable ability to evolve with the times.

Happily, two of the more nefarious “Potter” alums—both graduates of the Royal Academy of Dramatic Arts—get to flash far more endearing facets of their thespian personalities, including some terpsichorean skills, in “Finding Your Feet.” This might be a delightful late-life rom-com trifle but give it credit for also delving into the bumpier realities of senior living such as terminal illness, sheer loneliness and regular funeral attendance. You might know Imelda Staunton as the eminently hiss-able headmistress Dolores Umbridge and Timothy Spall as the nasty Peter Pettigrew aka Wormtail. Here, anyone paying attention knows immediately that they are destined to be an eventual couple from the second that her spoiled society dame Lady Sandra Abbott and his thoughtful barge-dwelling handyman Charlie find themselves at odds. Getting over that hurdle forms a familiar if sprightly path for the rest of the story directed by Richard Loncraine, who fares better here than with his listless 2014 portrait of an long-wed couple, “5 Flights Up,” another waste of Morgan Freeman in a pairing with Diane Keaton .

When we first spy snobby Lady Sandra, ensconced in her rambling estate house, she is overseeing preparations for a retirement party for her husband of 35 years (John Sessions). Later, in between toasts in his honor, Sandra stumbles upon the man of the hour canoodling with her best friend (Josie Lawrence) in the garage. It seems that they have been carrying on an affair for five years and a duly distraught Sandra hightails it to her estranged older sister, Bif (Celia Imrie, a knockout in both “Calendar Girls” and the “Marigold Hotel” films whose sparkling demeanor and saucy half-smiles alone are worth buying a ticket). She’s a never-married free spirit who uses a bike for transport, dons flowy boho frocks, paints stripes in her hair, goes for daily swims in a nearby waterway, is sexually active and resides in a charmingly cluttered north London apartment. In other words, nearly everything her hoity-toity racist and small-minded sibling isn’t.

Shades of “Blue Jasmine”-level self-absorption and hyper-privilege flashed in my head, although the script by Nick Moorcroft and Meg Leonard mostly gets away with allowing the boorish Sandra to have a stab at redemption once she agrees to participate in her sister’s community center dance class. Happily, among the regulars is Joanna Lumley of “Absolutely Fabulous” fame, off her tipsy high horse and gracing the film with her no-holds-barred opining. Of course, Sandra and Charlie are forced to pair off. But once he persuades not to lead, they finally connect through the rhythmic magic of the twist, disco, swing and bootie-shaking salsa. They might not be Fred and Ginger, but—as the song says—they will be slowly yet surely taking a chance on love, even if he fails to reveal everything about his personal situation and she briefly has a change of heart. Whether or not you agree that this gaggle of geezers actually deserve a gig in Rome based on a viral video of their charity-related Piccadilly Circus flashmob, it is very sweet to see Staunton and Spall, whose usual mournful basset hound countenance brightens once his Charlie is given to donning rakish chapeaus, toss the traditional three coins into the Trevi Fountain.

But the relationship that may most strike a chord with audiences is the one between the two polar-opposite sisters, who manage to reunite and recall happy memories from the past just in the nick of time. “Finding Your Feet” finds its own footing by putting its trust in its sturdy performers and avoiding many of the usual tea-time clichés as it allows its British cast to be defined by their relatable human circumstances more than quaint Anglo quirks. Basically, growing old is a bitch but doing it with others can ease much of the distress. And, just to support my Shakespeare-related theory, here is a fact found on the movie’s IMDb trivia section: Imrie did double acting duty while shooting “Finding Your Feet.” She was on the set during the day and then would race to the Old Vic at night for the privilege of playing eldest daughter Goneril opposite star Glenda Jackson in the gender-switch title role of “King Lear.” That right there is the very definition of dedication to one’s craft. 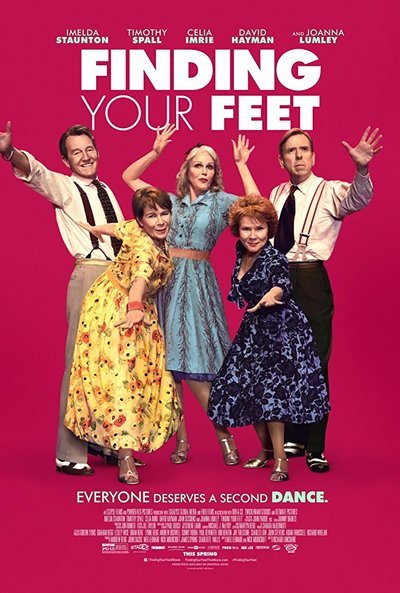