“Just don’t be afraid to tug on the heartstrings,” a real estate agent says as she advises an elderly couple to write a personal letter in hopes of securing a coveted Manhattan apartment. The folks behind “5 Flights Up” took that same advice and ran with it.

Co-stars Diane Keaton and Morgan Freeman have a breezy, easy chemistry as the aforementioned couple: Ruth and Alex, who decide after 40 years that it’s gotten too hard to live in their fifth-floor walkup. But the various other plot threads that weave in and out of this main story tie it up and bog it down. What begins as a sweetly sentimental story ends up being cloyingly melodramatic.

It’s also as crammed and cluttered as an overpriced New York City studio. The film from director Richard Loncraine – whose eclectic work runs the gamut from a daring 1995 take on “Richard III” to the standard Harrison Ford actioner “Firewall” from 2006 – features several subplots, and he segues between them with uneven rhythms. (Charlie Peters’ screenplay is based on the Jill Ciment novel “Heroic Measure”; perhaps all these stories felt more organic and persuasive when given the chance to breathe on the page than they do in a 90-minute film.)

“5 Flights Up” follows a busy couple of days for this longtime husband and wife, who have grown accustomed to enjoying their own leisurely pace amid the increasing bustle of the burgeoning Williamsburg section of Brooklyn. “The neighborhood’s changed now. It’s … cooler. Full of hipsters,” Alex intones in the kind of voiceover that spells out everything over the course of the film. (And really, the use of Morgan Freeman narration as a device has become such a cliché that it’s nearly depleted of all its inherent warmth and gravitas.)

Alex is a painter whose studio is a sunny corner room with spectacular views; Ruth is a retired schoolteacher. Both were pioneers in this part of town four decades ago as a newly interracially married couple enduring disapproving stares; now, the schlep upstairs has become too much to bear for them and their scruffy, 10-year-old terrier, Dorothy (who will play a pivotal role as the film goes on).

Their niece, a pushy real estate agent played by Cynthia Nixon in unflattering pantsuits and a terrible haircut, insists they sell their apartment and take advantage of how hot the neighborhood has become. She promises they’ll get $1 million for it – which will help them buy a new place with an elevator. And so begins the ignominious process of letting strangers traipse through their home to assess – out loud – not only the space but also the life Ruth and Alex have forged together within it.

This main story is actually the strongest element of the whole film. The wacky New York types with their lack of an internal censor and their wild ideas for what they’d do to the apartment provide a consistent source of laughs. But the prospect of leaving also sparks Alex’s memory, leading to a series of gauzy flashbacks in which the two meet, marry, move in together and enjoy prosaic and profound moments over the course of a lifetime. Some of these scene crackle; others are soggy with emotion. (As younger versions of these characters, Korey Jackson and Claire van den Boom do an uncanny job of channeling the older actors’ cadences and mannerisms without resorting to caricature.)

But wait, there’s more. Ruth and Alex also attend open houses at other people’s apartments and keep running into the same potential competitors and lookie-loos. One of them, a ubiquitous little girl played by Sterling Jerins, is so magical and wise beyond her years that I swear I thought she’d turn out to be a ghost or a figment of Alex’s imagination. This leads to some contrived, beat-the-clock scenarios in which they must juggle the various bids on their own apartment while also bidding on other properties. (If New York real estate is your thing, though—or if you’re an avid viewer of HGTV reality shows – maybe you’ll find all the minutiae intriguing.)

They also must contend with their sick dog, who’s been suffering from back troubles and might require costly surgery. It’s possible she may never walk again. (I’m not sure why their veterinarian is on East 27th Street in Manhattan if they’ve lived across the East River in Williamsburg for the past 40 years, but now I’m just nitpicking.) Loncraine shamelessly revisits the image of this sweet-faced little creature, panting or trembling in a crate in fear and pain.

Further complicating a possible apartment sale is a jackknifed big-rig which is blocking the nearby Williamsburg Bridge. The driver, a young man from Uzbekistan, flees the scene, sparking a manhunt and fears of a terrorist threat among New Yorkers who recall 9/11 as if it were yesterday. His ethnicity – which creates a pervasive mistrust – provides the platform for sanctimonious platitudes about the importance of racial understanding.

“Those few days were like one big roller coaster ride,” Alex intones as he wraps things up in one of many pieces of obvious narration.

Such heavy-handed earnestness nearly sinks the film entirely. But “5 Flights Up” has its moments. The sight of a neurotic Keaton walking and talking her way through the streets of Manhattan may remind you of other, better films. And Freeman’s slightly cranky avuncularity may seem too familiar by now. But reminiscent of Ira Sachs’s similar but vastly superior “Love Is Strange” – which is also about an aging couple struggling to find a home in an ever-changing New York City – “5 Flights Up” mines the reliable charms of its veteran stars as much as it possibly can. 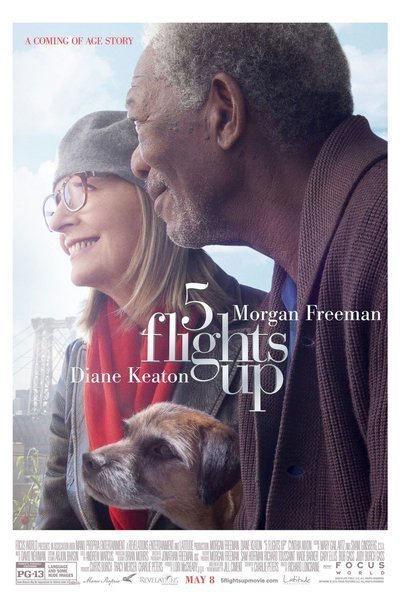