If AARP ever felt compelled to sue a movie for elder abuse, “Just Getting Started” would certainly be in the running. All sorts of red flags went up when I realized a comedy starring Tommy Lee Jones and Morgan Freeman—one that is directed and written by Ron Shelton (“Tin Cup,” “Bull Durham”), no less—was opening cold, with no screenings for critics.

I tried to keep an open mind about this boomer-bait romp about Duke Diver (Freeman), manager of Villa Capri, a luxury Palm Springs resort packed with retirees. He has fashioned himself into a kind of Hugh Hefner of senior living while keeping his past a secret. But alarms went off in my head once Christmas tunes began to ding-dong during the opening the credits. This can’t be a holiday movie, can it? Yes, it can.

The seasonal setting opens the door for such sight gags as carolers decked out in Dickensian garb save for being shod in flip flops and someone observing, “Some big balls he’s got” while dangling two sizable round tree ornaments. There is also an opportunity for “flocking” to be used as a euphemism for you-know-what. Shelton seems to think that just the very thought of Christmas spent in the heat of the California desert (actually, Albuquerque, N.M., mostly filling in for tax-break reasons) is a cause for yuletide mirth. While Lipitor is mentioned, the V-word (Viagra) is not. Take that as a blessing since I still haven’t recovered from Robert De Niro’s run-in with the erectile dysfunction drug in “Little Fockers.”

Freeman’s dedicated alpha male and his band of cronies (among them, Joe Pantoliano and comic George Wallace) rule the roost while Duke chases after hot-to-trot hens of a certain age—namely, Elizabeth Ashley, Sheryl Lee Ralph and Glenne Headly, who died in June at age 62. Sadly, her last film role involves her standing on a ladder and having Freeman lasciviously admire her buxom form—which would be kind of creepy even before the media began keeping a post-Weinstein tally of powerful men recently accused of sexual harassment.

Matters look up briefly once cowboy Leo, in the form of Jones, sashays into town and challenges Duke at his own games—which include golf, chess, ping pong, bench pressing and doing the limbo. But when Rene Russo’s Suzie shows up, Leo’s heart skips a beat and soon enough Duke is vying for her affections as well. Turns out this trio are all hiding something. So is the movie, as it awkwardly evolves from being a horny oldsters on the loose caper to a macho one-upmanship contest and, finally, a crime film about foiling a mob hit beset with dreary car chases, a literal snooze-fest stakeout, a rather tame cobra stuck in a golf bag and perhaps one of the least-exciting bomb explosions ever captured on film.

Johnny Mathis does appear to sing at the Villa Capri’s Christmas Eve party although he mostly lip syncs and looks all of his 82 years. And while no one will ever mistake Freeman and Jones for Martin and Lewis, it is not unpleasant to see these two Oscar winners together on the big screen for the first time. Mostly, “Just Getting Started” is a rather lazy boondoggle by Shelton, who waited 14 years to direct again and didn’t bother to make it worthwhile. Most disheartening are his portrayals of women who are mostly defined by the gaze and affirmation of male companions. The creator of such strong and richly drawn female characters as Susan Sarandon’s baseball muse Annie Savoy for “Bull Durham” and Rosie Perez’s “Jeopardy” whiz Gloria Clemente in “White Men Can’t Jump” should know better.

My most basic litmus test for whether a comedy is working is whether it makes me laugh. I groaned, maybe, but no chuckles emanated from me or from my lone fellow patron, a man with a gray beard and cap who sat a couple seats down from me at an early Friday morning showing. He did smile now and then, but that might have been the result of whatever crinkly-bag snacks he was munching. The trouble is, “Just Getting Started” never really gets going. It only kept me thinking, “Is this ever just going to finish?” 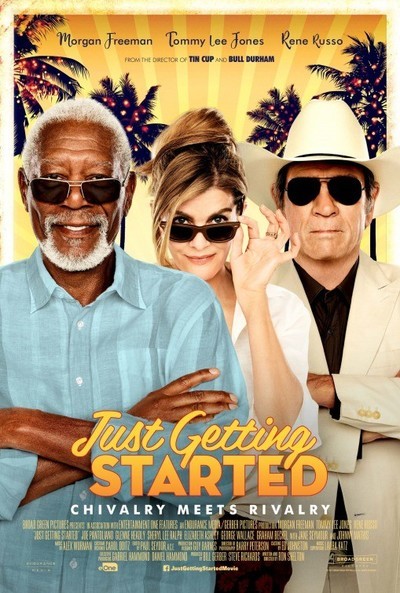