I didn't have many notes on "F9," the latest installment in the "Fast and Furious" series, but one near the top of the first page could stand in for the others: "Oh, sure, why not?"

That was in response to a moment showcased in trailers and ads, wherein street racer and thief turned globetrotting super-spy Dominic "Dom" Toretto (Vin Diesel) evades pursuers during a jungle chase by triggering the rocket booster on his souped-up vehicle, soaring off the edge of a cliff, and using a cable he's fired into a mountain on the other side to swing him and his wife and espionage partner Letty Ortiz (Michelle Rodriguez) to safety. Like Tarzan on a vine. That's the kind of film this is: an "Oh, sure, why not?" film. James Bond meets the Road Runner cartoons. Remember in "Commando," when John Matrix, held hostage by a dictator's goon on a commercial flight, kills him in his seat with a neck snap as the plane is preparing for takeoff without anyone noticing, then crawls into a landing gear housing and drops into a swamp conveniently located at the end of the runway? Or when the good guys in "Indiana Jones and the Temple of Doom" leap out of a crashing plane with an inflatable yellow raft instead of parachutes, inflate the raft on the way down, plop onto a snowy mountain embankment at an angle that leaves them all unharmed, and slalom till they get to a river?

If, as more than one fan has noted, the "F&F" films have turned into an international, multicultural, hip-hop-friendly answer to James Bond, the last few have been Roger Moore-era Bonds. The only question is whether this new one is "Moonraker" or "Octopussy." I vote "Moonraker" because a satellite figures into the plot. I would describe said plot in more detail if I thought I could keep it straight, and if I thought it mattered, but it doesn't. Plot was never the reason people went to these films. The appeal lies in the chases and stunts, the bruising fights and mythic posturing, in the repeated invocations of [rumbling Vin Diesel voice] FAMMMM-LY, and in the soap opera/professional wrestling-style storytelling, which allows bad guys to become good guys and introduces new characters that we're told mean the world to an established character even though nobody in the previous films mentioned their name before.

In "F9," the character is Dom's long-lost brother Jakob Toretto (John Cena), who disappeared from Dom's life in 1989 after being blamed for a car crash that killed their car-racer dad. In the present day, Dom is living off the grid with Letty and their son when Roman (Tyrese Gibson), Tej (Chris "Ludacris" Bridges) and Ramsey (Nathalie Emmanuel) show up to inform them that national security bigwig Mr. Nobody (Kurt Russell) captured their old antagonist Cipher (Charlize Theron, introduced in "The Fate of the Furious"), but the plane taking her to prison was attacked by rogue agents and crashed in the fictional Central American nation of Montequinto. Cut to Montequinto, where the gang combs through the wreck while dressed as if they're going to a barbecue. Turns out Jakob is behind the crash and brought Cipher to his boss, a young, rich Northern European psycho named Otto (Thue Ersted Rasmussen). Otto wants to acquire and assemble two halves of a top secret device that can control the security networks of every country on the planet. He also has a dad who is referred to but never seen. (Cast Mads Mikkelsen in the tenth film, you cowards.)

The espionage aspect gets even more complicated from there. And, as in most entries in the back half of this franchise, none of the twists matter in any meaningful sense, except when they jack into the idea of Dom's band of brothers and sisters as an improvised family of outsiders, one that sometimes includes people related by blood but more often is based upon shared values, loyalty, and a willingness to die for the tribe. To that end, Diesel and Cena take the "long lost brother who did a heel turn" thing drop-dead seriously. They play it like it's grand opera. I guess this is the most admirable and risky way to play it—kudos to any actor willing to look ridiculous, which is constantly a risk in this series—even though there are times when you might recall that in other projects, both Cena and Diesel have been funny, and nobody asked them to even smile here. It's all dark-and-stormy, all the time. After a certain point Cena's scowling, glowering, and jaw-flexing gets a bit dull. You may start wishing the movie would skip ahead to the big confrontation between Dom and Jakob that Settles All Family Business. The concluding moments between the characters are moving, though, in a World Wrestling Entertainment sort of way.

The action set-pieces are thrilling and intentionally hilarious, though the digital effects and compositing vary in quality. Some shots bring fantastic panoramas and impossible stunts to life in a way that makes you believe they could happen. Others die onscreen, looking like images from that horrible early aughts era when Hollywood filmmakers asked effects houses to do things the technology would not yet support. There's a gleefully deranged subplot about two-thirds of the way through that gives fans what they've been only half-jokingly saying that they wanted from the franchise for several years now. And the Montequinto section suggests what might happen if Dom and company visited Jurassic Park (the CGI'd shots of cars and trucks on winding rainforest roads are so gloriously primeval that you wouldn't be surprised if the crew was attacked by velociraptors).

What else do you need to know? There's a truck chase at the end that could've been an outtake from the 2007 "Speed Racer," and a long action scene where a character rappels from one end of a city to another, or so it seems (because the sequence goes on for what feels like half a day, the rappeller defying both gravity and city planning a la Spider-Man). Helen Mirren has a cameo as Magdalene Shaw, mother of Deckard, Owen, and Hattie Shaw, a sixtysomething but still super-smooth and powerfully sexy jewel thief. She drives like a bat out of hell through London at night while delivering exposition to Dom, smirking the whole time, like she knows she could lay Dom if they weren't in a moving car. Dom patiently asks her clarifying questions as if they're sitting in a coffee shop in broad daylight. Characters you thought were dead turn out not to be (again, a standard trope in both wrestling and soap operas) and characters who are presented as evil turn out to be good, or at least not beyond redemption (ditto; the franchise also goes the other way when it feels like it). Like the Bond films and "Mission: Impossible," these are basically superhero movies where nobody wears a cape, although the red leather pants that Cipher wears when she's imprisoned in a glass box have a Catwoman-goes-to-Studio 54 exuberance. (You can tell director Justin Lin loved the leather pants because he keeps Theron in them all the way through the film. Theron delivers many of her lines while looking over her shoulder, the better for the audience to admire how much time she spends at the gym.)

Gibson and Bridges make a splendid comedy team, as always, and Rodriguez grounds her scenes with Diesel in emotional reality, giving them a weight that the rest of the film doesn't have and mostly isn't interested in. Diesel holds the thing together through sheer mopey majesty. His rumbling baritone and sad eyes have become intensely moving. He's a depressive he-man, a sad sack doom-racer, and Lin photographs him as if he's a posthumous statue of himself. It's startling to realize just how long Diesel has been playing Dom and how much the character has changed. Dom is Diesel's Rocky Balboa, his Indiana Jones. In the first movie, he was an antihero, a badass who was good when circumstances required it (like his other great recurring character, Riddick). At some point, though, maybe after the last film that he did with the late, lamented Paul Walker, Diesel started to seem both bigger and much older and more tragic, weighed down by Dom's responsibilities to his family and perhaps by Diesel's investment in a franchise that he has a financial stake in.

Now Dom swaggers more deliberately, gut-first, brokenly, his face radiating hard-won wisdom, gigantic arms arced beside his torso in a pincer shape. He's Popeye the Sailor man cast in the role of Atlas, carrying the world day and night, setting it down only when he needs to kick ass. He kicks much ass in this one. There's even a scene where Dom fights a dozen guys barehanded. At one point in the melee, Lin, practically winking at us, cuts to an overhead shot of the combatants piled on Dom like children piled on an adult. Dom has stopped moving. Is he dead? Aw, hell, no. Bodies will fly through the air like potato sacks—just you wait. Both the character and the franchise are indestructible.

Available in theaters on June 25. 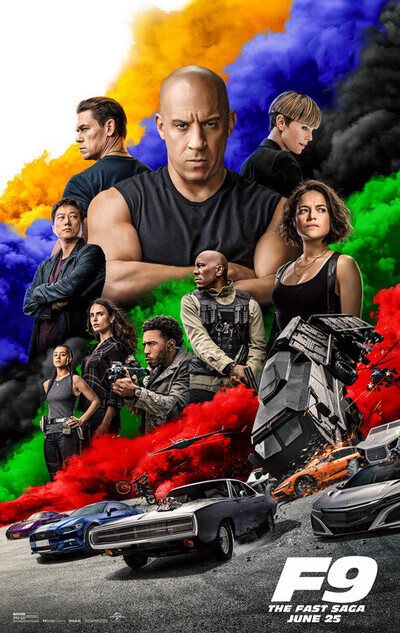 Rated PG-13 for sequences of violence and action, and language.

Kurt Russell as Mr. Nobody

Cardi B as Leysa