Late August seems like the perfect time for a bit of tawdry, twisty escapism on Netflix, something to rival the success of shows like “Clickbait” or “Pieces of Her.” And the cast of the latest entry in the Netflix thriller mini-series catalog is more than up to the challenge of a project like “Echoes.” At first, its premise holds promise, amplified by a fun, flinty dual performance from Michelle Monaghan, an underrated actress for most of his career (seriously, go check out “Trucker” and “Kiss Kiss Bang Bang” now). Who doesn’t want to watch Monaghan play twins in a goofy mystery?

Sadly, the potential of “Echoes” starts to drain before the premiere is even over as it gets goofier and goofier in a way that’s not entertaining but frustrating. And then it makes the opposite mistake, over-explaining everything about its story through dull flashbacks and interrogation scenes. For four episodes, “Echoes” defiantly makes almost no sense, and not just in a traditional thriller/mystery nature but because of shallow writing and choppy editing. And then, almost as if the writers know they need to pull the reins on this runaway horse, the show unfolds the most expository episode of TV I’ve seen in years, explaining it all in the fifth chapter, before limping along for two more. By the end, it’s impossible to care about any of these people or what has happened to them, other than to hope the talented cast puts it behind them quickly.

Monaghan plays twins Leni and Gina, living very different city/country lives when the show opens. Gina is in Los Angeles with her therapist husband Charlie (Daniel Sunjata, tragically miscast), and she’s carved out a successful writing career. Leni stayed back in Virginia and married her high school sweetheart Jack (Matt Bomer). The two had a daughter named Mattie (Gable Swanlund), and Leni seems well-liked in her rural community while her identical twin enjoys the high life in Hollywood. Well, sorta.

“Echoes” opens with Gina’s disappearance, sending Leni home to figure out what happened to her sister. The main secret (in a show full of them) that drives the narrative is that Gina and Leni have been switching places every year on their birthday, allowing one to live the mirror life of the other. They’re kind of both married to Charlie/Jack and kind of both mother to Mattie. Yes, it’s weird. It’s also a great hook because it should not only give Leni dueling motives of finding Gina while also keeping everyone around them unaware of the ruse but allow us to question her own sanity given what the sisters have been doing for years. Most importantly, what could Gina have run from that Leni wouldn’t know about already? Changing identities requires complete honesty, right?

And yet creator Vanessa Gazy almost immediately muddies the Virginia water with a half-dozen other secrets. There is the odd threat of horse thieves in the hills, flashbacks to a burning church, something nefarious happening in a bathtub—Gina/Leni is not just trying to figure out what happened to her sister, she is assaulted by trauma and deceit everywhere she goes. “Echoes” gets downright silly with revelations, ending every other scene with a confusing shock. It gets so you need a flowchart to keep track of the sisters and their secrets. At times, it almost feels like major chunks of the narrative are missing, like a reader who accidentally skipped a chapter in a book. I was reminded of the famous story around “The Snowman” about not filming the entire screenplay. “Echoes” has that kind of choppy rhythm that’s more annoying than mysterious.

It’s a shame because, again, some of the cast is up for the challenge of a twisty soap. Monaghan settles into her role(s) nicely, struggling at first to distinguish the sisters (although that’s kind of on purpose to support the narrative) but eventually carving out distinct identities for Leni & Gina. Bomer is always solid, although woefully underutilized here, and the same could be said for Jonathan Tucker, who gives the show a much-needed sense of danger when he appears as Gina’s boyfriend, but then the series wastes his efforts on the aforementioned “here’s what’s going on” episode.

The main problem with “Echoes” is the most common TV problem of the current era—it doesn’t have the story to support a series. We can put up with silly characters like this in a 100-minute movie (maybe) but stretching out this kind of unrealistic behavior to seven episodes simply breaks the potential entertainment value by highlighting how unbelievable everyone is forced to be just to get to the next end credits. I started watching “Echoes” with excitement over what secrets these twins might be keeping not only from everyone in their lives but also each other. But there’s way too little fun to be had in this show that seems content to mimic superior thrillers in a way that sounds like, well, you know. 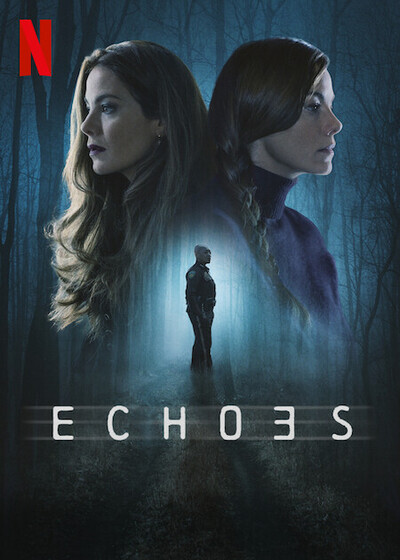 Michelle Monaghan as Leni and Gina