In the year 2075, if man is still alive, if woman can survive, and they start writing histories of 21st century cinema, “The Snowman” will make a very excellent case study. Perhaps by that time sufficient evidence will have been gathered to explain just why a movie assembled by a group of mostly first-rate talents wound up such a soggy, slushy mess. I myself cannot quite figure it out.

Adapted from the bestselling mystery novel by Jø Nesbo, the movie stars Michael Fassbender as a Norwegian police detective with the much-already-remarked-upon name Harry Hole. Why they couldn’t have just called him Harry Chasm or Harry Abyss is beyond me. The movie begins with what turns out to be a flashback. The scene is shot with what appears to be a lilac petal dangling in front of the lens. In a large cabin in a snow-covered field, a man in a police car visits a young boy and his mother. And there the man administers a test to the boy, slapping the mother every time the kid gets a question wrong. Things go from bad to worse, and eventually a Volvo sinks into a lake, and a kid is left homeless. Cut to the present day, and Harry is sleeping off a drunk in a bus shelter. Heckuva way for a cop to conduct himself, but Harry’s a special cop. A little later on in the picture, Katrine Bratt, who becomes Harry’s unofficial partner on a serial killer case, tells him that she studied his cases in “the academy.” Harry’s a genius detective whose personal life is an utter mess. One of the movie’s many problems is that the viewer is treated to much more of the mess part than the genius part. In point of fact, I don’t think the genius part ever emerges.

I mentioned first-rate talents. The cast is what they used to call one of “International All-Stars.” Aside from Fassbender, there’s the engaging Rebecca Ferguson as Bratt. Charlotte Gainsbourg is here as Harry’s ex-girlfriend. Toby Jones is a policeman in another Norway town. Val Kilmer, his voice rather badly and inexplicably dubbed, turns up. As does J.K. Simmons, speaking in his own voice and applying to it a credible and yet somehow incredible mid-Atlantic accent. You haven’t lived until you’ve heard him say “gah-raaaahzzh,” but I’m not sure I’d pay sixteen bucks for the privilege.

There are big names who should know better behind the camera as well. The director is Tomas Alfredson, who made the very excellent 2008 “Let the Right One In” and the very ambitious and mostly excellent 2011 “Tinker Tailor Soldier Spy.” The three screenwriters, Peter Straughan, Hossein Amini, and Søren Sveistrup, have not unusually disgraced themselves in the courses of their respective careers. The editor is Thelma Schoonmaker, the veteran of much work with Martin Scorsese, who is here an executive producer. On the subject of editing, let’s move back to that opening scene. Given to where it cuts to, the viewer might infer that the movie’s orphan grows up to be its hero. Which provides a frisson, or is meant to provide a frisson, to the fact that the movie’s serial killer seems to know an awful lot about Harry, and that the killer constructs snowmen at the scenes of his crimes, snowmen that look an awful lot like one that appears in the opening scene. How, one might wonder, did the killer get sufficient insight into Harry and his past to be able to taunt him like this?

Well, not to give anything away, but the film is constructed to misdirect the viewer as much as possible. I think there’s a relatively simple reason for this, and it also has to do with why this ostensibly adult thriller has an ending that’s almost literally a gloss from a “Scooby-Doo” episode: the actual plot, once laid out in a way that makes sense, is so patently packed with convenient coincidences that it’s practically simple-minded.

Another problem is this: snowmen aren’t scary, and when you try too hard to make them scary, you just make it worse. The movie is strewn with camera pans from innocent-looking street scenes to … THREATENING SNOWMAN FACE, and the effect is very Dramatic Chipmunk, only less dynamic. To top off all of the ineffective weirdness, the movie ends on a tone-deaf “got a sequel if you want it” note. I do believe, and I’m sorry for this, that it’ll be a cold day in hell before any such thing materializes. 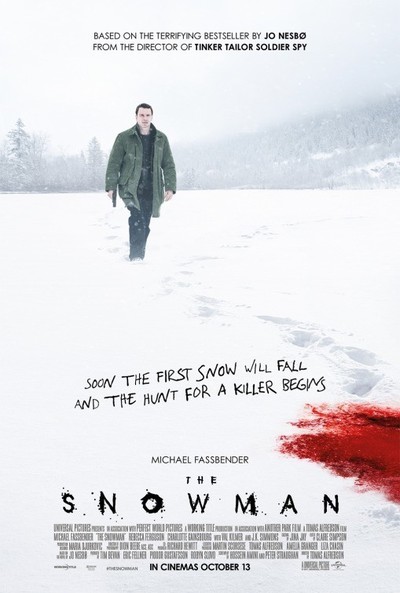