“Clickbait” is a reminder of why Netflix series became such hits in the first place. A cast of recognizable, serviceable actors dive with melodrama and zeal into a narrative that defies logical sense but moves at a breakneck pace, ends on cliffhangers like clockwork, and incorporates just enough zigs and zags to keep viewers guessing. The miniseries’ title is accurate enough: “Clickbait” grabs you, whizzes you along, and leaves you feeling satisfied before you forget everything you just watched. It’s not sophisticated, but it is highly bingeable, and its eight episodes are consistently outlandish enough to keep you watching.

The miniseries from Australian creators Tony Ayres (whose name you may recognize as being affiliated with another buzzy, goofy show called “The Slap”) and Christian White follows a family caught up in a bizarre, only-of-this-moment mystery. Husband, father, brother, and son Nick Brewer (Adrian Grenier) appears one day in a viral video, holding a series of signs that say “I ABUSE WOMEN” and “AT 5 MILLION VIEWS, I DIE.” The video burns through the Internet, amassing thousands of clicks in minutes, taking over news networks, and becoming the only one thing anyone is watching on their phones, tablets, computers, or TVs.

Who is Nick Brewer? “Clickbait” attacks that question from two different angles. First consideration goes to Nick’s family: his shocked and enraged sister Pia (Zoe Kazan) and mother Andrea (Elizabeth Alexander), and his numb and confused wife Sophie (Betty Gabriel) and their two sons Ethan (Camaron Engels) and Kai (Jaylin Fletcher). The Brewers live in a small Oakland community where everyone seems to know everyone, and soon what is happening to Nick takes over their lives. Sophie’s schoolteacher colleagues whisper after her; Ethan and Kai’s classmates turn on them; and reporters camp out outside their house. And the question no one can answer is: Why would this happen to Nick? Or, on the flip side: What did Nick do to make this happen?

The spontaneous, impulsive Pia, whom Kazan permeates with jittery energy, refuses to stand aside and wait for the police to do their jobs. “This video is not a confession. It’s a death threat,” she says, and she turns to hacker friend Vince (Jack Walton) to look into Nick’s online life and help her investigate on her own. Her other ally is Detective Roshan Amiri (Phoenix Raei), a missing persons detective desperate to prove himself and earn a promotion into homicide. As they pursue a number of leads—was Nick seen somewhere; where were the videos of him filmed; did he disappear on the way to work?—they tumble down a rabbit hole that suggests Nick wasn’t the loving family man he seemed to be. One dating app profile appears, then another, and another. With Nick abducted and unable to speak for himself, it’s up to his family members and the others involved in his case to try and piece together who Nick really was.

Each of the eight episodes of “Clickbait” focuses on a different character, with episode titles like “The Sister,” “The Detective,” and “The Wife.” First up is Pia, who takes everything personally and who feels guilty about her last interaction with Nick. Next is Sophie, who has a secret of her own and is trying to hold the family together. Later on are Ethan and Kai, who fear the worst but whose lives spent entirely on social media give them a different, nearly symbiotic, relationship with what is happening to their father. And Roshan and journalist Ben Park (Abraham Lim), who see in this case an opportunity to advance their careers, also get their own standalone episodes—and their choices serve as a commentary on the very “clickbait” nature of the show’s content.

That shift in perspective per installment isn’t so drastic that the “truth” of events changes from person to person, and that restraint is the right choice. “Clickbait” is already so reliant on jarring narrative reveals (often complemented by Kazan’s stricken, mouth-agape face) that experimenting with subjectivity vs. objectivity would have been too much. Instead, each focused chapter allows a peek into characters’ interior lives. The actors grab onto those opportunities and sprint forward, and the series benefits from their lack of artifice.

Kazan is the series’ anchor as the brash Pia, all contemptuous energy, guilty glares, and stomping strides, and she sparks well against Gabriel’s Sophie, who is more contained and constrained. “Clickbait” attempts to make a point about how the white Pia can be hysterical in a way that the Black Sophie can’t, and although the series doesn’t take the idea quite far enough, at least it raises it. The same nod of acknowledgment applies to Roshan’s homelife, which includes his family speaking Persian and Roshan’s time praying at a mosque. It’s depressingly rare in Hollywood for an actor of Iranian descent to play a character of Iranian descent who isn’t a terrorist, and Raei has the right kind of bearing to fall into fairly handsome, slightly smarmy cop roles. Is there a “Law and Order” spinoff that needs a new detective? Raei could work!

Do any of these performances indicate murky depths or hidden layers? Not really. Whether in the present time period or in flashbacks, the writing doesn’t allow for a ton of tangibly built backstory, and there are a few scenes sprinkled throughout (especially in the fourth episode) that play a bit too much with the “real” world vs. the persona we cultivate online. And some characters feel underwritten, in particular Ethan and Kai, who the series treats more as inconveniences than legitimate narrative concerns.

For the most part, though, the ensemble’s work feels urgent and in the moment, and that matters for a series like this. Ultimately, “Clickbait” doesn’t say anything singular about the anonymity of the Internet, and it flirts with a lot of big ideas it doesn’t pursue as vigorously as it could have: how the community of chat rooms and message boards can lead to insularity and paranoia; the disposability of hookup culture and the way toxic masculinity can manifest within it; and the aforementioned difference in how the media treats people of different races. But a show that went down those roads wouldn’t have been “Clickbait,” and also probably wouldn’t have been this silly or low-brow entertaining. 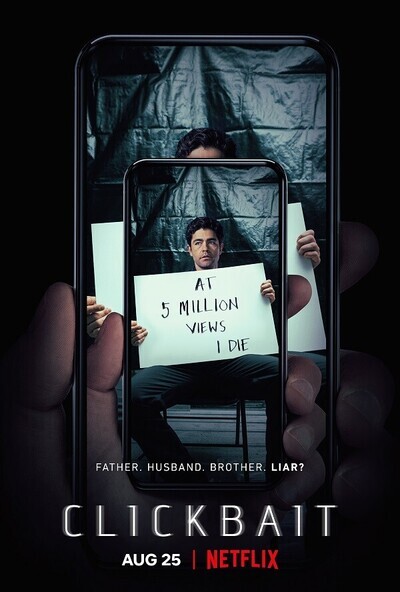