A friend of mine used to joke that he would always end up sitting in front of people in movie theaters who had never seen a comedy before. You know the folks who think every single joke lands enough to provoke a hearty guffaw. Netflix’s “Pieces of Her” is a thriller that only works for someone who has never seen a thriller before. It traffics in so many tropes that probably worked better on the page of Karin Slaughter’s hit book, but just lay limp in this inert attempt at genre entertainment. Toni Collette never misses, but she’s left stranded here by a script that doesn’t go far enough to provoke B-movie thrills and is structured in a way that drains anything that feels realistic. Consequently, it’s another project stuck in that valley between camp and character, containing too few pieces of either.

“Pieces of Her” opens with the kind of jolt that convinces people to buy a book to read on a beach vacation. Laura Oliver (Collette) and her daughter Andy (Bella Heathcote) are at a restaurant on what seems like an ordinary day when a mass shooting unfolds. Laura steps in to protect her daughter and has displays a surprisingly vicious protective nature, slicing the jugular of the assassin. It’s the kind of twist that gets worldwide attention on the news—the mother who stopped more loss of life with her courage. Laura doesn’t want worldwide attention.

For reasons that won’t be spoiled, Laura being on the news is bad for both her and Andy. When violence comes again into Laura’s life, this time to her actual door, she sends her daughter away, but Andy refuses to go into hiding, trying to figure who exactly this woman is that she’s been calling mom. Instead, she starts digging into clues left about Laura’s background, and “Pieces of Her” becomes series of revealing flashbacks that also include David Wenham as Laura’s brother and Terry O’Quinn as her father, who was publicly murdered in Oslo decades earlier.

The puzzle structure of “Pieces of Her” can be infuriating. This kind of series of reveals and twists is a more delicate balance than it may appear. Something like HBO Max’s “The Tourist,” also premiering this week, keeps its revelations moving at a pace that services character and tension. Here, it feels like the writers are constantly cheating us, keeping back details that would make these characters more interesting if we knew what the Hell was going in their minds. There’s a fine line between thrills and keeping us in the dark for so long that we stop caring. “Pieces of Her” crosses that line, especially with how much is revealed via flashbacks. We stop caring about the characters or their plights because we don’t know why we should care. It becomes information dumps in episodic structure instead of anything actually thrilling.

It’s a shame that this inert writing drags down most of the performers with it too. Heathcote blandly plays confusion for most of the series, which likely makes for a relatable protagonist on the page but a boring one on TV. The fascinating and promising Jessica Barden, who plays Laura in flashbacks, has strangely been directed by TV vet Minkie Spiro (a “Homeland” regular) to dampen most of her charming instincts and go only with sullen. Only Collette offers any interiority. She’s an actress who is able to sell back story with a glance or shiver of memory in a way that so many can’t even fathom. She gives more pieces of herself than the show around her has any idea what to do with. 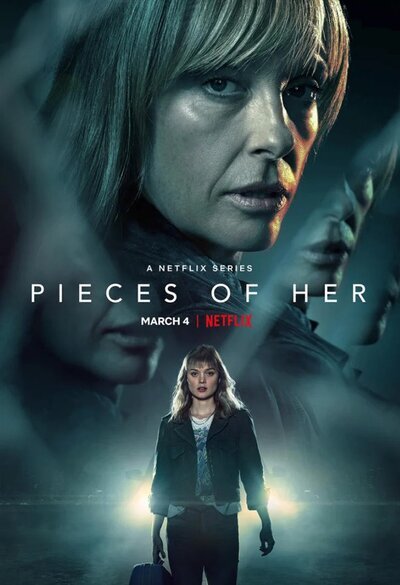