Dying of the Light

Paul Schrader is one of those filmmakers that some cinephiles will never stop rooting for, even though a good number of his films (the recent ones especially) are better in concept than execution. "Auto Focus," "Dominion: Prequel to The Exorcist," "Adam Resurrected," the occasionally excellent "The Walker" and last year's "The Canyons" had the spiky energy and fascination with fringe-dwellers that've been Schrader hallmarks since the 1970s, when he rose to fame as an independent writer-director and regular collaborator with Martin Scorsese ("Taxi Driver," "Raging Bull," "The Last Temptation of Christ"). At the same time, though, they were stubbornly theoretical in certain ways: filled with good ideas that often felt more illustrated than dramatized.

If only "Dying of the Light" had broken Schrader's recent close-but-no-cigar streak. This story of a career CIA operative (Nicolas Cage) doggedly pursuing a terrorist who once imprisoned and tortured him is not a good movie. It is impossible to know which percentage of its failures are attributable to Schrader, who wrote and directed the movie, and which to his producers, who allegedly took it away from him and reworked it to the point where Schrader decided he wanted nothing more to do with it. Schrader is contractually barred from discussing what happened, maybe because he's been blisteringly vocal about past instances in which his films were re-edited or reshot without his consent. He and his lead actors, including Cage and costar Anton Yelchin, did appear in photos online recently wearing t-shirts that read, "I have no comment on the film or others connected with the picture,” which isn't, strictly speaking, a criticism but sure doesn't feel like an endorsement.

But here's the problem: Gene Siskel famously said that his litmus test for giving a movie thumbs up or thumbs down was asking himself which would be more interesting: the film he'd just seen, or a documentary of its lead actors having lunch. A similar question here might be, "Which would I rather watch: this movie, or a documentary about the creative battles that happened while it was being made?" Option #2 seems preferable. "Dying of the Light" is a shrill and bombastic slog, with an all-over-the-map collection of tones that never cohere into a compelling vision.

From its opening credits sequence onward, the film's editing, music and overall tone evoke a hard-R action thriller, or perhaps a bloody TV series in that tradition, such as Fox's "24"; but the movie's hero, Cage's former field agent turned greying, embittered desk jockey Evan Lake, seems a George Smiley type, more an intellectual than physical threat. No matter: the film shows him getting in brutal hand-to-hand fights with people, running them down while firing guns at them, and otherwise carrying on as if he's Liam Neeson in one of the "Taken" films. This is all tough to accept, not just because Evan has been set up as the sort of character who wouldn't be carrying on in that way, but because the action has a '70s cop show clumsiness, and is carried out by a lead character whose biography mitigates against him doing what the script has him doing.

The tale begins with a flashback that the film will revisit periodically: in 1994, Evan is imprisoned, beaten and mutilated by Islamic terrorists in an Al Qaeda vein, and is about to be murdered when US forces storm the place. Twenty years later, Evan still bears scars from that encounter, including a maimed ear. He gives a fire-and-brimstone speech to a bunch of new, young agents, then settles in at his desk in CIA headquarters, where he's treated like a peevish professor emeritus that nobody wants to learn from. Then his young coworker Milton (Yelchin) gives him information indicating that his chief torturer, Muhammad Banir (Alexander Karim), might be alive in Bucharest, seeking treatment for his rare blood disease. (This twist echoes an aspect of the Osama bin Laden bio: the Al Qaeda figurehead had kidney problems.) Long story short: Evan goes rogue, as they say, and wanders around Romania with Milton in tow, chasing his tormentor.

On paper, this story feels very Schrader-ish, evoking key images and themes from earlier in the writer-director's long career. Chief among these is sight of an emotionally or physically tormented and socially maladjusted loner, partly modeled on Ethan Edwards in "The Searchers," who embarks on a mission of vengeance that is ultimately less about justice than about feeding the hero's obsessions so that he doesn't have to face himself, a task for which he's ill-suited anyway. Travis Bickle in Schrader's "Taxi Driver" script is emotionally scarred by his Vietnam experience, while the 'Nam vet in the Schrader-penned "Rolling Thunder" loses his hand when local criminals feed it into a garbage disposal; in both stories, the hero's "mission" seems an elaborate and bloody distraction from the storm of misery raging in his mind.

There are fleeting hints of that kind of psychological acuity in "Dying of the Light." Evan spirals into self-pitying rage when his bosses tell him to forget about Banir and force him to retire. Things get worse when he's diagnosed with frontotemporal dementia, an Alzheimer's-like condition that might account for his more unpleasant behavior, which is abrasive even in the film's early scenes.

How much of Evan's desire for vengeance or justice is really about vengeance or justice, and how much is about distracting himself from feelings of age and irrelevancy? (He rails against the cluelessness and incompetence of the post-9/11 CIA in a way that turns the United States' foreign policy misadventures into a sort of coded parable for dementia, and maybe impotence, too.) These are good questions that the film needn't have answered, but it would've been nice if it had moved the into the spotlight and really scrutinized them. There's a weird poignancy in the sight of two brutal adversaries, Evan and Banir, both of whom are in physical decline, chasing each other around Romania—the terrorist is basically the Comanche chief Scar to Lake's long-deskbound Ethan Edwards. But the movie explores their feud in the most clumsily rhetorical terms, via speeches and subtext-as-text dialogue and action scenes that are intriguingly small-scaled (such as a pistol-toting Evan chasing a man through hotel grounds on foot) but over-edited and over-scored. to the point where the movie seems to be trying to force a level of "awesomeness" that one rather doubts that Schrader aspired to. The inevitable final man-to-man struggle verges on Zucker-Abrams-Zucker style absurdity. It's basically George W. Bush vs. Bin Laden; add a shrieking free-jazz score and you've got yourself a comedy setpiece for the ages.

Again, though, it's impossible to lay blame for all the things that went wrong here, and it's a pointless exercise anyway. What matters is what's on the screen. What's on the screen is frustratingly unrealized, often tone-deaf, and more painful to watch than a deliberately trashy or stupid film might have been. Yelchin is likable playing a young blank slate; Irene Jacob is mostly wasted as one of the hero's old flames; Karim is a touch hammy as Banir, though one can't complain about an actor overdoing it opposite Nicolas Cage, whose character is maybe a 6 on the Cage Scale of Nuttiness. (The character has a medical reason for acting erratically, and throughout, Cage seems to be calibrating how big is too big.) Every now and then you can hear murmurs of ambition beneath the film's surface chaos, but they're faint and and agonized, like the voice of a gangster movie foe being strangled with a pillow. 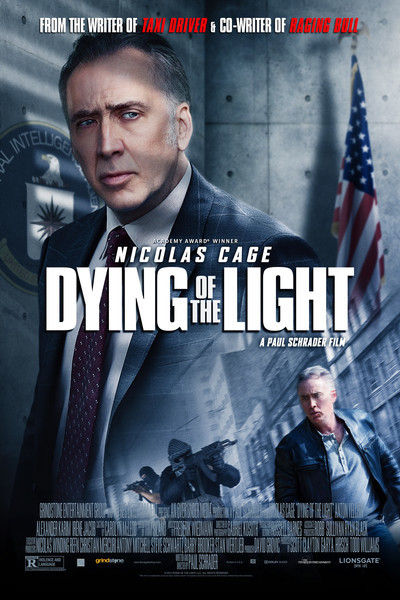