Maybe it's all intentional. Maybe "The Canyons," in its flatness and tedium, is meant to serve as a reflection of the death of cinema, depicted so bleakly during the film's opening titles by an array of abandoned and decaying movie theaters. Maybe the joke’s on us, and all the pre-release hype suggesting that a micro-budget train wreck was barreling our way was merely part of the marketing strategy.

If so, bravo. Genius. Director Paul Schrader and screenwriter Bret Easton Ellis have done it. They've made their point, with a convincing whimper.

But I don’t think so. I think they're trying to say something provocative about the emptiness of Hollywood and the desperation that fame-seeking breeds, something that’s been said before in smarter, sharper ways—by these very veterans of this town and this industry, actually. The director of "Auto Focus" and the writer of "Less Than Zero" know their way 'round these parts, but don't seem terribly interested in sharing their insights.

They seem to want to leer. They want us to leer, too. Instead, we end up gawking at the ineptitude of it all. And a great deal of that comes from the casting of Lindsay Lohan at the center, which functions as both a coup and a curse.

Given that she’s playing a character not too dissimilar from who she is in life—or at least the celebrity-industrial complex's version of her—it’s impossible to separate the on-screen performance from the off-screen persona. As model-turned-bored-party girl Tara, Lohan lounges poolside, cigarette in hand, and lunches outside at a trendy Sunset Plaza cafe. She wanders around expensive shops, oversized sunglasses protecting her from the public glare, and complains to her boyfriend about wanting to keep some aspects of her life private.

Christian kinda-sorta uses his family money to produce movies by day; by night, he arranges three-ways with Tara at his minimalist Malibu mansion with just a few taps on his smartphone. (All movie sociopaths live in crisply modern houses that look like biotech labs.) Christian is about to start production on a low-budget slasher flick in New Mexico starring Ryan (Nolan Gerard Funk), the blandly handsome boyfriend of his assistant, the blandly pretty Gina (Amanda Brooks).

But unbeknownst to him, Tara was involved with Ryan a few years ago—and has started up an affair with him again. Christian, meanwhile, is having a fling on the side with the blandly pretty Cynthia (Tenille Houston), a yoga instructor who used to take acting classes with…Ryan. Ryan, meanwhile, gets hit on left and right by pseudo-connected Hollywood types. (The use of gay sex as a frightening weapon, as a means of control, has more than a whiff of homophobia about it.) Suspicion turns to obsession turns to violence, with the many melodramatic plotlines converging in a series of breathless text messages. No need for a flow chart to keep track of it all; suffice it to say, everyone’s screwing each other over, or at the very least screwing each other.

"The Canyons" was supposed to have been a comeback for Lohan, or at least a paying gig to get her name out there again for her work rather than her wildness. (She has a co-producer credit.) She can indeed be a raw nerve on screen, but too she often seems distant and rushed, to the point where her lines are unintelligible (but that could just be the shoddy sound mix). Instead of leaving you inspired by the possibility of renewal, Lohan’s performance just leaves you feeling sad. Maybe playing a troubled young woman wasn’t the best way for her to escape being a troubled young woman. 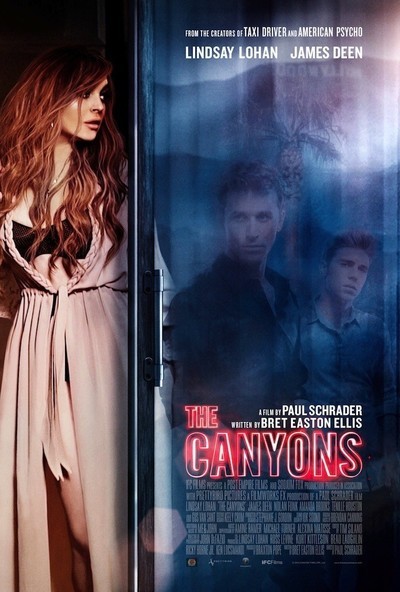