Most films—especially taut, lower-budgeted indies—choose one theme or dramatic premise and run with it. Others cross-wire two potent and ostensibly unrelated ideas and bask in the sparks they generate.

The terrifically assured and engrossing Brazilian film “Don’t Call Me Son” is a great example of the latter breed. On the one hand, writer/director Anna Muylaert invites us to contemplate the fluidity of adolescent gender identity via the story of teenage boy who’s testing boundaries by drifting provocatively between male and female appearances. (If this sounds like a topic for a Gender Studies class, fear not: the film is a drama, not a lecture.) On the other hand, Muylaert also probes how much of who we are comes from family, since, additionally, her tale concerns kids who were removed from their biological parents at birth.

The gender theme is announced first. We’re at an outdoor party of young people where 17-year-old Pierre (Naomi Nero)—whose androgyny radiates from his long hair and makeup as well as his sinuous movements—first nuzzles close to a guy on the dance floor, then peels off and connects with a girl. Cut to inside the house, where the couple are having energetic sex; the camera tilts down to reveal that he’s wearing women’s underwear.

Pierre’s cross-dressing is a statement of personal style and a means of rebellion, much as men wearing long hair was in generations past. Appropriately, it’s also a form of defiance that doesn’t seem to faze his peers, only those old enough not to get it. And it’s a natural stance for a kid in an arty, urban, bohemian milieu. Pierre also plays in a rock band, where he occasionally makes out with the male lead singer and finds it necessary to prevent his would-be girlfriend from interrupting their practices.

At home, he enjoys a close relationship with his single mom Aracy (Daniela Nefussi) and his adoring younger sister Jaqueline (Lais Dias). Things in their working-class home display only the usual family ups and downs until state officials show up one day and take Aracy and Pierre downtown for DNA tests. Though Aracy seems totally mystified by the disruption, she’s soon hauled off to jail and it’s announced that both her children were stolen at birth and now will be returned to the families who’ve been searching for them ever since then.

When Pierre meets his birth family, headed by foursquare dad Matheus (Matheus Nachtergaele) and bubbly mom Glória (also played by Daniela Nefussi), they are naturally overjoyed by the long-sought reunion and expect him to be too. Of course, he’s anything but; he might as well be a kid hustled aboard an alien spaceship.

This conjunction results in a passage that’s easily one of the most brilliantly directed scenes in a movie I’ve seen this year. The newly constituted family are to meet in a restaurant; Matheus’ and Glória’s party arrives first and he takes charge in paternal fashion by asking for a different table. Then, an unexpected diversion: the couple’s younger son, Joca (Daniel Botelho), who looks about 14, gets a phone call and goes outside to take it. Although the boy is only a secondary character, Muylaert stays with him for an unusually long time, overhearing his side of a conversation that seems like a typical teenage exchange (he complains about a girl who won’t speak to him).

When Joca goes back into the restaurant, Pierre and Jaqueline are there with his folks, and the awkwardness is palpable. The parents call their eldest Felipe, his birth name, but then, in making a toast to him, add “Pierre.” They ask what he’s interested in and are told he’s into music and plays in a band. Glória asks if that’s why he paints his nails blue: Because it’s a rock band? The easiest thing to say, naturally, is yes. Is he interested in football? No. And so on. There are two things very striking as this scene plays on. One is that so much more is conveyed by the characters’ looks than what they say. The other is that, in diverting to Joca, establishing his character and then continuing to observe him after he joins the dinner, Muylaert gives us a third angle on this situation (besides those of the parents and Pierre) that’s subtle but important through the rest of the film.

As in many Brazilian films, class plays a significant role. When Pierre moves in with his “new” family, he enters a realm of upper-middle-class comforts where there’s a servant and his room is capacious and inviting. Throughout, his attitude toward the new environment and family is one of deep ambivalence. Some things are appealing, and he tries to be respectful, but he also doesn’t want to mislead them about who he is—a desire that’s hilariously conveyed in a scene where the folks take him to buy some Polo shirts and he insists on acquiring a loud, zebra-striped dress instead.

The various conflicts here—over identity, gender, class and so on—are rendered in a way that keeps several tug-of-wars going at once. The most satisfying thing about their treatment is that Muylaert resists the temptation to come down hard on one side or the other. She’s got sympathy to go around, and sees the poignancy and love in the parents’ desire to reclaim their firstborn, as well as the understandable passion in Pierre’s hunger for self-determination.

Muylaert’s excellent last film, “The Second Mother,” which gained worldwide attention, has some elements in common with “Don’t Call Me Son.” Both films feature two mothers (although only the new feature has the same actress play both, occasioning some amazing work by Nefussi), an indication of Muylaert’s professed interest in the dualities contained in motherhood. One thing the films don’t have in common, though, is style. The director has said that the “classical” (her word) style of the earlier film, with its elegant, distanced compositions and paucity of camera movement, is typical of her work; the ragged, edgy, mostly handheld approach of “Don’t Call Me Son” (flawlessly executed by cinematographer Barbara Alvarez) is a departure.

Taken together, though, the two films indicate a filmmaker of remarkable range, subtlety and intelligence—a Brazilian talent who’s deservedly gaining a place on the world stage. 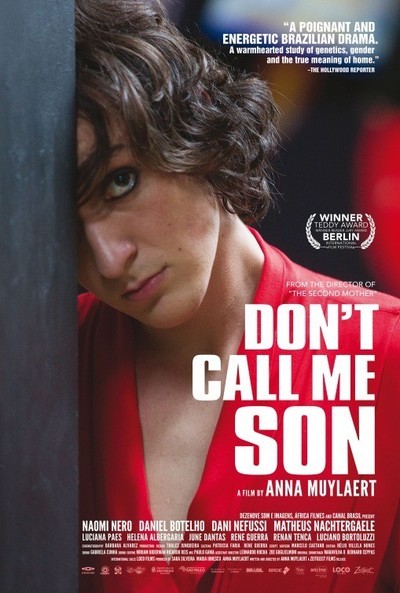