A fair to large number of the contemporary Brazilian films that make their way to United States distribution deal with social inequities on a large and harrowing scale. The frantic, violent 2002 “City of God” is a pertinent example, as are the hyper drug-busting “Elite Squad” pictures. Writer/director Anna Muyleart examines class and income difference in a much, much quieter register in “The Second Mother,” a domestic comedy-drama that starts off from a fairly pat premise but builds strength over the course of its careful, empathetic, and crafty unpeeling of its characters.

Regina Calé plays Val, a spirited if frumpy middle-aged woman who’s worked for a well-off Sao Paolo family for over a decade. In that time she’s become practically a second mom to now-teen Fabinho (Michel Joelsas). She’s practically a co-conspirator with the kid. After his parents, haute-bohemians Barbara (the imperious bossy parent, played by Karine Teles) and Carlos (the laid-back failed artiste inheritor of a family fortune, played by Lourenço Mutarelli) upbraid Fabinho for having a stash of pot (they’re avid smokers themselves of course), Val assists him in retrieving it from the trash. It’s all cozy enough in its way, especially as Barbara and Carlos, the better to assuage their liberal guilt, make something of a show of treating Val as “family.”

This practice is put to the test when a figure from Val’s past calls. Val, as it happens, left the Northern part of Brazil for Sao Paolo with something behind her: a child of her own, Jéssica, whom she entrusted to relatives when she went to work for something like a living. Jéssica (the great Camila Márdila) is now a teen, and about to apply for university in Sao Paolo. She’s seeing her mother for the first time in a long time, and the resourceful, smart, appealing girl is put off right away by her mother’s insistence that she move into her employer’s house with her. Given that Jéssica is attractive, resourceful, smart, and aspires to a form of independence, one can expect all manner of sparks to fly. And they do.

The tensions between servant and master are evident before Jéssica arrives, revealed in Barbara’s barely-held in, snobbish reaction to a coffee set Val presumes to give the family as a gift. Once Jéssica arrives, she at first knocks out her mom—“The Internet...You can do that?” Val exclaims on seeing her daughter’s web savvy in action—then confuses her with her dedicated studying: “The whole day with a book, it’s easy to go crazy.” Jéssica’s insistence on taking the family at their word about her and her mom’s equality in their eyes is a test of Barbara’s already clearly-limited patience. At the same time, Carlos sees in Jéssica a liveliness and adventurous spirit that’s now dead in him, and this leads him to make some extreme pronouncements that animate some of the most awkwardly funny scenes in the film. As the movie goes on, Jéssica gets increasingly fed up with her mother’s willingness to be patronized and humiliated by her employers. As various pushes come to shove, Jéssica’s compelled to share a secret with her mom that brings them closer even as it illustrates what some might see as an unfortunate pattern.

This isn’t groundbreaking stuff, but it’s consistently well-observed and engaging. The cast is terrific, and Muyleart has an understated assurance in her handling of film language. The depiction of a door that separates a large house’s kitchen from its dining room is especially astute throughout. As are Muyleart’s frequent uses of long, unbroken takes. By the end of “The Second Mother,” one feels enough at home with the characters to leave the theater with a healthy concern with where they’re going to end up next. This isn’t the kind of film one associates with potential sequels, but I wouldn’t mind seeing Muyleart follow up with Val and Jéssica some time 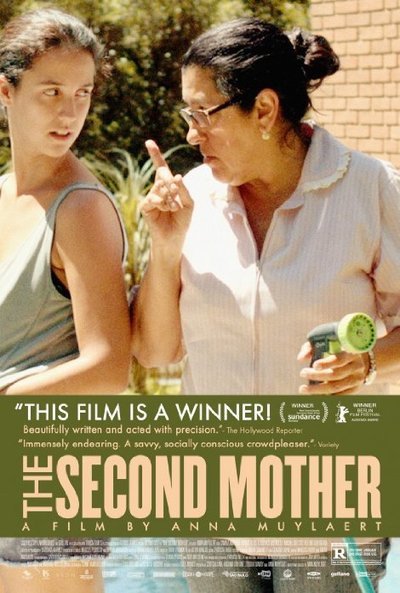 Rated R some language and brief drug use