Dolemite is My Name

Twenty years have passed since Eddie Murphy last used the kind of R-rated profanity he frequently employs in “Dolemite Is My Name,” and it’s a homecoming of sorts. After decades of comedic PG and PG-13 rated fare, not to mention more dramatic turns like his Oscar-nominated role in “Dreamgirls” and his unwise choice of “Mr. Church,” the self-proclaimed “Mister F--k You Man” is back. Less than a minute into director Craig Brewer’s very entertaining biopic, Murphy drops the word Samuel L. Jackson is most famous for uttering. It’s not just the triumphant return to cussin’ that fans have been craving, it’s also a reminder: Sam Jackson’s favorite word may be maternal-adjacent and twelve letters long, but before he commandeered it, it was owned by Rudy Ray Moore.

Murphy plays Moore, the chameleon-like hustler who parlayed his ability to change and his tenaciousness into a career as a stand-up comedian whose signature character, Dolemite, made him famous. Before discovering the self-promoting, badass trickster pimp of the title, Moore tried his hand at shake dancing, magic acts and even singing. As the film opens, Moore is trying to convince a local DJ (Snoop Dogg) to play a record he recorded in his aunt’s living room. The DJ is unmoved by the outdated R&B sound. “Our time has passed,” says DJ Snoop. “You think I wanna be running a radio station out of a ghetto record store?”

That record store keeps them both employed, along with Moore’s friend Toney (Titus Burgess). It’s Toney’s job to shoo away the wino (Ron Cephas Jones) who keeps coming in to ask for change. Jones may be physically funky, but his verbal game reeks of potential genius. Stumbling into the store, he regales anyone who will listen with tales of the “baddest motherf----r who ever lived, Dolemite.” Dolemite bragged about his preternatural sexual prowess and his fabled feats of derring-do. He “handcuffed lightning and threw thunder’s ass in jail.” With gravel in his voice and the shakes of possible withdrawal on his person, Jones is electrifying in this brief cameo, captivating the audience as much as he does the onscreen Moore. With a little sharpening of the punchlines, Moore can take these stories and produce a comedy album reflecting them back into the world.

The real Rudy Ray Moore is on record crediting this neighborhood wino as the genesis for his Dolemite stories and raps. As one person says in the film, a lot of these guys had been in jail and, to pass the time, crafted these tall tales of signifying and braggadocio from their own experiences and the colorful dialogue they heard on the corners. Moore collects these stores in a scene set around a garbage can fire where Jones and his fellow street denizens spin their yarns for cash. Yet Moore wasn’t alone in mining this particular vein for comedic gold: When Richard Pryor turned his comedy away from the White gaze and peered into his own front yard, he created Mudbone, the hard-drinking street philosopher who premiered on record the same year Dolemite made his onscreen debut. From Ned the Wino on “Good Times” to “Do the Right Thing”’s Da Mayor, this particular character has often been used as a foil who hid bitter truths within broad humor, like Shakespeare’s fools but with more hyperbole. Drunk and downtrodden they may be, but it doesn’t negate the wisdom earned from the harsh realities of their experiences. As the saying goes, in vino veritas.

After the success of his comedy albums, one of which even charts on Billboard, Moore considers what’s next for Dolemite. While watching Billy Wilder’s “The Front Page” with his buddies, Moore realizes that true immortality resides on the screen, where the beam of light shooting from the projector is like a cave etching. He thinks filmmaking is easy because, to him and his cronies, Wilder’s comedy isn’t amusing at all, yet it got made and is on screens all over America. “This movie had no titties, no funny and no kung-fu,” Moore says, “the stuff people like us wanna see.” Moore is determined to make a Dolemite movie. And he isn’t going to let his lack of cinematic knowledge get in the way.

When writers Scott Alexander and Larry Karaszewski were announced, I thought they were the wrong choice for this material, but in many ways, Moore’s story has parallels with their former subject, Ed Wood. Like Burton’s film, “Dolemite Is My Name” has a supporting cast of colorful characters who are lovably weird, starting with Wesley Snipes’ D’Urville Martin. Martin is the most pedigreed person on the set, having worked as an actor with Roman Polanski (“oh, you were the elevator operator in ‘Rosemary’s Baby’,” someone points out) and Moore’s fellow do-it-yourself filmmaker Fred Williamson. Martin isn’t on board until Moore offers “Dolemite” as his directorial debut in addition to the role of the film’s antagonist. Drunk with power, Snipes gives an outrageously funny performance that combines prima donna preening with bemused resignation over what he perceives as an amateurish affair beneath his talents. Also on hand in amusing performances are Keegan-Michael Key as writer Jerry Jones and Craig Robinson as Ben Taylor, the man who does for Dolemite what Ike Hayes did for Shaft, minus the Oscar.

Holding court in the center of “Dolemite Is My Name” is Eddie Murphy, whose performance left me a bit conflicted. A brilliant mimic, Murphy could have gone for a full-on vocal imitation of Moore (though, even with the pudgy gut, he doesn’t really resemble his real-life counterpart), which is what I expected he would do. Instead, Murphy pretty much uses his own voice, so the scene where Dolemite is rapping “The Signifyin’ Monkey,” plays more like Eddie Murphy paying homage to his hero rather than becoming him. However, there’s something else going on here, something akin to what Anthony Hopkins did in “Nixon,” or perhaps what Diana Ross did in “Lady Sings the Blues.” This isn’t facsimile; instead it captures the essence of the person the actor is playing. The real Moore had genuine empathy for the people around him, as well as a tenacity that sprung from his ego yet was tempered by self-deprecation. Murphy conveys all this superbly, much of it reflected in his eyes. There’s that mischievous twinkle we’ve come to know and love Eddie for, but there’s also a sweetness and vulnerability I haven’t seen from Murphy since Lisa gave Prince Akeem back his earrings on the MTA in “Coming to America.”

Look at the loving way he platonically dotes on Lady Reed (an excellent Da'Vine Joy Randolph), the patron at his comedy club who will later star as the madam of Dolemite’s stable of kung-fu women. In her, he sees an equally confident kindred spirit, a big, beautiful woman counterpart to his doughy, average looking man. Their hilariously filthy country music parody duet is one of the film’s highlights. Reed gets a speech about representation that at first seemed like overkill—we can infer what she’s saying from the scenes she’s in—but perhaps it needed to be vocalized anyway so the folks in the back can hear it.

Comparisons are certain to be made between this film and the much more sour and terrible “The Disaster Artist,” but a closer skew would be Mario van Peebles’ “Baadasssss!” Like van Peebles’ chronicle of the making of his father’s indie classic, “Dolemite Is My Name” plays like something that was made while on the run, evoking the feel of its subject matter. Its plentiful humor is never bitter or self-mocking, even in its most absurd moments. Moore’s “Dolemite” may seem like a “The Room”-style midnight movie, but as Simon Abrams and I pointed out on this site, any snide mockery of “Dolemite” from today’s audiences runs counter to how it played when I saw it in 1975. Additionally, the film and the character had an unmistakable influence on countless future rappers like Snoop Dogg and Big Daddy Kane.

“Dolemite Is My Name” is a typical biopic buoyed by its unrelenting hilarity, its affection for its subject and commitment to the time and place it is set. And yet, something still nags at me about its lead performance. Don’t get me wrong, Murphy is very, very good, and on the basis of this, I’d love to see him tackle Pryor next. I just buy him more as Rudy Ray Moore than I do as Dolemite. That is very likely the intention here, as Moore says numerous times in the film that the role is entirely a put-on. That I keep rolling this performance around in my head says something about its staying power. Murphy is not exactly the most charitable of actors when he’s the lead, a by-product of his star power, but he’s at his best here when he’s slyly letting the scene be stolen from underneath him. His last scene is an excellent example of this—who thought his onscreen wise-ass persona could be this humble?

This review was filed from the Toronto International Film Festival on September 16, 2019. 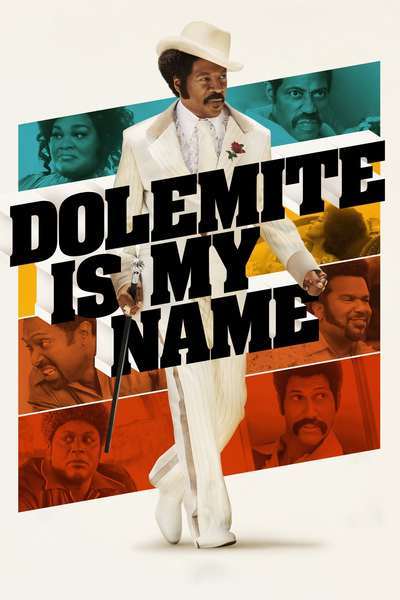