Eli Roth's remake of "Death Wish," starring Bruce Willis as a surgeon tracking the criminals who murdered his wife and put his daughter in a coma, is either the film we need right now or the film we absolutely don't need. It depends on whether you think the movie's self-aware take on vigilante daydreams speak deep and eternal truths about manhood, or reheat macho white guy fantasies of urban badassery that were questionable when Charles Bronson first incarnated them back in 1974.

Bronson, at least, was a former coal miner with the body of a wrestler and the face of a 19th century Siberian peasant, and it was established that even though his character, New York architect Paul Kersey, had been a conscientious objector during the Korean War, he was a military veteran and terrific shot. This all ensured that when the hero outdrew or thrashed men half his age in the original film and its four increasingly ridiculous sequels, you believed that he might be capable of such awesomeness (well, maybe not so much in the later movies, when Bronson was pushing 70—but whatever, he was Bronson). Because Willis has done over 30 action-adventure films, we buy our "Death Wish" ticket predisposed to believe that Paul can bullseye bad guys in a moving car while rolling around on the pavement like John McClane, or prevent a man from grabbing a hidden gun by pinning his hand to a bar with a knife; but there's nothing to support Paul's transformation into a remorseless killing machine, except that the film wants and needs it. The cops investigating the case (Dean Norris and Kimberly Elise) believe that their suspect is a natural on the shooting range but has no experience in combat, and they're right. Paul is such a newbie that he injures himself with a firearm twice, but pretty soon he turns into Rambo anyway, because nobody bought a ticket see Gandhi.

This is not a reactionary's unsettling answer to urban decay that was undeniably happening everywhere, as the original "Death Wish" was. It's a weirdly and darkly nostalgic movie. It wants us to be living in the 1970s or '80s again, when the public had lost a great deal of faith in the effectiveness of the police, the National Guard, and other designated enforcers, and it really did seem as if American cities were falling into chaos. I was a kid then, and I remember what it was like. Many people preferred not to go out at night unless they absolutely had to, so prevalent was the expectation of being assaulted or mugged or worse. In 2018, most major cities, New York included, are experiencing their lowest violent crime rates since the late 1950s, which means that the way the characters talk about the city streets in this "Death Wish," and the way this film presents the very idea of the city, amounts a negative form of wish-fulfillment. Paul Kersey only makes dramatic sense in a hellhole, not a heckhole.

To that end, "Death Wish" moves the setting from New York to Chicago, an anomalous modern American metropolis with a major murder problem—albeit one driven by street gangs shooting at each other with weapons brought in from adjoining states that have more lenient gun laws than Illinois, not the "Grand Theft Auto"-style ensembles through swarming Roth's widescreen compositions like bands of cackling highwaymen. Gang-related deaths exist in this film's world, too, but "Death Wish" isn't terribly concerned with those, except inasmuch as they let the film show Paul performing surgery on bullet-riddled black gang members. These "Oh, the humanity!" moments are ultimately just a setup providing Paul with an unregistered Glock that he can ice bad guys with. Norris' character refers to gang-related murders as "asshole-on-asshole violence," i.e., violence that's typical and therefore isn't worth getting worked up over, right before he tells Paul that his wife's murder and his daughter's catatonia are "special," and therefore personally upsetting to him. You don't need to be a dog to hear that whistle.

Many of the bad guys here are white, but their creepy otherness codes them as something else. The primary audience for this movie would appear to be viewers of Fox News Channel or CBS crime shows, both of which depict the inner city as a drug-addled outdoor charnel house where unmarked white vans kidnap young girls into Arab sex rings, serial killers install art-directed torture-dungeons in their basements, every other block hosts a black or Latin drug cartel or an Islamic terrorist cell, and the "American carnage" spoken of in Trump's inauguration speech is a daily reality from sea to shining sea.

There's a lot of talent involved in this thing. As written by Joe Carnahan (and rewritten by Scott Alexander and Larry Karaszewski, the minds behind "Ed Wood," "The People vs. Larry Flynt" and the recent "The People vs. O.J. Simpson"), this "Death Wish" updates Paul's story for the age of social media, turning him into a YouTube-certified, meme-ready folk hero who's dubbed The Grim Reaper because he wears a hoodie that hides his face like a cassock. Elisabeth Shue has a very brief role as Paul's wife, who is murdered immediately (though both she and her daughter are spared rape this time, in a break from "Death Wish" tradition). Vincent D'Onofrio gives one of his typically overcooked yet thoughtful and surprising performances as Paul's troubled younger brother Frank, who lends Paul a shoulder to cry on when he isn't chastising him for making him feel worthless.

Willis isn't exactly chasing Oscars here, but he's a pro who knows how to calibrate a preposterous character and make him seem credible in the moment. He gives more to the movie than the movie gives to him, staying on the right side of caricature, underplaying scenes that seem calculated to pander. The movie is at its best when Paul is contemplating his celebrity while watching news reports and YouTube clips of his exploits and realizing (as many action heroes do, if they're being honest) that he was dead inside until killing gave him a reason to live.

A montage near the midpoint of "Death Wish" juxtaposes split-screened close-ups of Paul's hands stripping, cleaning and loading guns with closeups of Paul picking spent shells from gang members' bodies in trauma surgery—a resonant image that promises commentary on how men like Paul think they're ending the cycle of violence when they're really just perpetuating it. But the movie's not capable of sustaining arguments that delicate, so the notion dissipates as soon as it appears, like smoke after a firefight. Roth is known for staging gleefully ugly violence, and there's a bit of that here. But more of the mayhem has a Rube Goldberg quality, with one lucky accident causing another, and all of them building towards a memorable kiss-off moment accompanied by a sub-James Bondian groaner of a pun. (In a trailer moment, Paul traps a wounded bad guy under a car held aloft by a jack, announces that he won't kill the guy "...but Jack will," then pulls the jack out.)

The new "Death Wish" is a vigilante film that's also about vigilante film cliches, when it remembers to think about such things, which is only occasionally. Most of its attempts to subvert or freshen up familiar elements aren't well developed, and they're certainly never strong enough to counter the bloodlust and gun worship that's invariably going to power this kind of project. There are moments when it seems faintly ashamed of itself for existing, but then it doubles down on its "Death Wish"-ness, as if to say, "We really mean it, we swear. Don't read too much into the goofiness." It flirts with surreal slapstick—there's even a scene where a killer gets clonked on the noggin with a bowling ball—but never musters the nerve to become a spoof.

Francois Truffaut memorably observed that there's no such thing as a truly antiwar film because war is so inherently cinematic that merely to depict onscreen it is to enshrine it. The same goes for critical or ambivalent films about gun violence and vigilantism. This "Death Wish" is larded with odd grace notes and moments of self-awareness (and sometimes self-regard), but in the end, it's mainly here for the bullets, the bodies, and the steely smirk on the hero's face as he dishes up murder and calls it justice.

Much of the dialogue concerns the necessity of a man protecting "his" women, but, as in the original Bronson films, this fictional world cannot abide too many women, because their presence in the story would complicate the posturing and feuding. They're absent presences, more often talked about (and sometimes wept over) than seen, and a pretext for heroes to do what they always wanted to do anyway: kill sneering, tattooed goons with bad teeth. The end product is a wish-fulfillment fantasy for suburban fathers who crank "Back in Black" while driving the kids to Chipotle after soccer practice. It's vigilante dad rock. 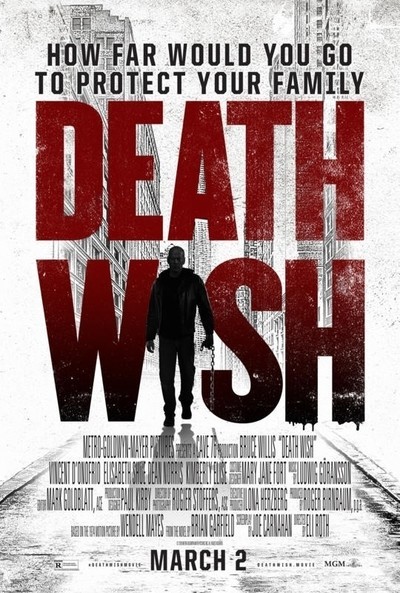 Rated R for strong bloody violence, and language throughout.

Jack Kesy as The Fish

Writer (from the novel by)

Writer (based on the 1974 motion picture by)