The People vs. Larry Flynt

"This is it?" the Cincinnati printer asks dubiously, looking at the page proofs for the newsletter Larry Flynt wants him to print. "You've got to have text--like Playboy." Flynt is unyielding. He is interested in gynecological detail, not redeeming social merit. Soon his newsletter has blossomed into Hustler magazine, although not without difficulties (one editorial conference is devoted to a discussion of why the number of a magazine's pages must be divisible by two).

If you believe that Hustler is pornographic and in bad taste, you will not get an argument from Flynt. Flaunting the magazine's raunchiness, he became a millionaire while printing cartoons such as the one in which "Dorothy has a foursome with the Tin Man, the Cowardly Lion and the Scarecrow--oh, and Toto." Emboldened by his success, Flynt grew more outrageous, until finally one of his parody ads inspired a $40 million lawsuit from the Rev. Jerry Falwell.

Was Falwell right to be offended? He certainly was; the parody of a Smirnoff ad was in outrageously bad taste. Did Flynt have a right to print the parody? The Supreme Court eventually decided that he did. No one in their right mind could believe that what the ad said was true (as Falwell himself admitted from the witness stand), and the right of free speech includes the right to offend.

The Supreme Court's ruling in the Hustler case came under attack at the time, but consider this: If Falwell had won his suit against Flynt, this newspaper would be fundamentally different. The editorial cartoons could not make fun of public officials. The op-ed columns could not risk offending. The lawyers might have questioned a recent review in which I said a film should be cut up into ukulele picks; after all, that might have hurt the director's feelings. And Falwell himself might not have been able to broadcast his sermons, because they might have offended atheists (or you, or me).

"If they'll protect a scumbag like me, then they'll protect all of you," Flynt said after his 1987 court victory. Inelegant, but true. Milos Forman's "The People vs. Larry Flynt" argues that the freedom of speech must apply to unpopular speech, or it is meaningless. Beginning with this belief, Forman constructs a fascinating biopic about a man who went from rags to riches by never overestimating the taste of his readers.

If you question the dimensions of Hustler's success, reflect that a modern skyscraper towers in Los Angeles, proclaiming FLYNT PUBLICATIONS from its rooftop. Even if he's only leasing, that's a lot of rent. When Flynt started Hustler in 1972, Playboy was already 20 years old and Penthouse was a success. He aimed below them--at the vulgar underbelly of the market--and offered pictorial details that Playboy, at least, has never been interested in printing.

For Flynt, played by Woody Harrelson, Hustler was like winning the lottery. He was a Kentucky moonshiner's son who ran away from home and eventually ran strip clubs in Cincinnati. There he found the love of his life: Althea Leasure (Courtney Love), a bisexual stripper who bluntly told him, "You are not the only person who has slept with every woman in this club." Hustler's first publicity breakthrough came when Flynt printed nude photos of Jacqueline Onassis, a coup so sensational it forced the media (and the public) to notice the magazine. "The People vs. Larry Flynt" shows Flynt running a loose editorial ship in which his brother Jimmy (Brett Harrelson), hangers-on and assorted strippers and hookers seem to publish the magazine by committee.

Very early, he meets a man destined to be a lifelong companion: his lawyer, Alan Isaacman (Edward Norton), who wins his spurs defending him in one action after another. An early antagonist is Charles Keating, then head of Citizens for Decent Literature, more recently an S&L crook. "I'm your dream client," Flynt tells Isaacman. "I'm fun, I'm rich and I'm always in trouble."

The movie shows Larry and Althea as a couple deeply into promiscuity; proposing marriage to him in a hot tub, Althea is shocked when Larry thinks she means monogamy. Their marriage survives many tests, not least the one when Flynt is temporarily converted to religion by Ruth Carter Stapleton, sister of the president. (The movie never really makes it clear how sincere Flynt was in his born-again period.)

As the magazine grows, Flynt keeps it on the low road, eventually developing enemies. In 1978, during a trial in Georgia, both he and Isaacman are shot by an unknown gunman, and Flynt is paralyzed from the waist down. That leads to a long dark period, until 1983, when he and Althea hole up in a Los Angeles mansion, using pain-killers and whatever other drugs come to hand. The magazine seems to run itself while they cower behind the steel door of their bedroom.

Flynt eventually has an operation that stops his pain, and he kicks drugs. Leasure, not as lucky, sickens and dies of AIDS. Then comes the suit by Falwell, and a journey that ends with Flynt pumping his wheelchair into the Supreme Court.

Larry Flynt is never likely to find his face on a postage stamp, but he has played a role in our era. A negative one, in contributing to the general decay of taste and decorum, and a positive one, in being the point man for a crucial defense of American liberties. As an individual, he seems to have been clueless some of the time and morose much of the time (he plays a camera role in the film as a judge, and looks unhappy).

But like many another man he was fortunate to find the love of a loyal woman, and Althea, as played by Love, is a quirky free spirit. The product of a tragic childhood (she identified the bodies after her father murdered her family, then she was sent to an orphanage, where she was abused), she is made by Love into a kind of life force, misdirected but uncompromised. It is quite a performance; Love proves she is not a rock star pretending to act, but a true actress, and Harrelson matches her with his portrait of a man who has one thing on his mind, and never changes it.

Milos Forman's other films include "Amadeus" and "One Flew Over the Cuckoo's Nest," both about inspired misfits with the courage of their eccentricity. Now Larry Flynt is another. Who else could have so instinctively combined idealism and cash, declaring at a press conference, "Americans for a Free Press is me. Who do you think is paying for this show?" 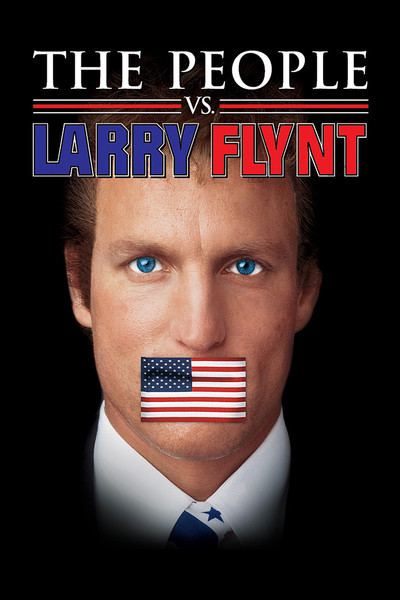