Leaning heavily on a fairy-tale aesthetic, "Dating & New York" opens with old-fashioned credits (actors listed alongside their character names), New York landmarks rendered in dreamy pastels, and, literally, "Once Upon a Time" across the screen. A narrator (Jerry Ferrara from "Entourage") with an amused ironic voice starts the story, describing "two millennials cursed with the paradox of choice." Considering the film as a whole, "cursed" is way too strong a descriptor. Nobody seems cursed in "Dating & New York." No one has enough of an inner life, first of all, to allow themselves to feel "cursed" about anything. Maybe this is supposed to be a comment on "millennials" (there's a whole scene having to do with refusing to limit yourself to one ice cream flavor), or on the swipe-right form of "dating." "Dating & New York," from first-time feature director Jonah Feingold, who also wrote the script, is a mixed bag. The script is often very witty, peppered with sharp observations and two very entertaining performances, but there are underlying problems the movie cannot overcome.

Through a dating app called "Meet Cute," Wendy (Francesca Reale) and Milo (Jaboukie Young-White) don't exactly "meet cute" but they do meet for drinks. Their banter is self-consciously witty and their main moment of bonding comes when they allow each other to check their phones at the table. It's such a relief that they go home and sleep together. Milo really wants to find a mate, Wendy wants to date other people, but their connection was so strong they draw up a "Best Friends with Benefits" contract, hashing out the different items over coffee. Meanwhile, Milo's best friend Hank (Brian Muller) and Wendy's best friend Jessie (Catherine Cohen) really do "meet cute" (it's the kind of movie where there are basically four people living in New York) and start up a more traditional romance. Milo and Wendy over-talk and over-think everything. They're apparently having hot sex as well, although you'll just have to take the movie's word for it on that.

One of the problems is that the two "entertaining performances" I mentioned are not given by Reale and Young-White, but by Muller and Cohen as the "friends." Cohen shows up and takes over the movie in about five seconds of dialogue with her extroverted wisecracking style, and Muller's responses to her—to Milo, to everything—is open, natural, and funny. Reale and Young-White, on the other hand, have next to no chemistry as actors, not even as "friends," so it's hard to figure out what exactly is holding these two together. Milo is supposed to be a love-lorn romantic, but Young-White doesn't project that at all. He reads more like a wannabe ladies' man, who also has a crush on Hank. (This is a very intriguing and welcome possibility, one the film does not explore.) Muller and Cohen are like Bruno Kirby and Carrie Fisher in "When Harry Met Sally," but at least Meg Ryan and Billy Crystal held the center. Kirby/Fisher were there as contrast, and so are Muller/Cohen, but there's really nothing to contrast against.

The cookie cutter laziness of many recent rom-coms is one of the many reasons rom-coms have fallen from grace, and "Dating & New York"'s desire to comment on and deconstruct the rom-com genre is admirable. There are some funny sequences and it wears its references proudly (the aforementioned "When Harry Met Sally" is ever-present, including an explicit nod where the four characters have simultaneous FaceTime chats). "Annie Hall" is present, too, and there's barely one scene taking place without a New York landmark in the background. All of that being said, there's one moment that really jars. Hank and Milo head into a corner bodega, and Milo whines that the bodega isn't "bougie" enough. Milo is supposed to be a native New Yorker. This is the kind of attitude that has ruined New York, jacked up prices, shattered the character of individual neighborhoods, and made the city a forbiddingly expensive place to live. It wouldn't be such a big deal if 1.) Milo wasn't supposed to be the sympathetic lead and 2.) the movie wasn't supposed to be a love letter to New York.

Feingold has a tuning-fork ear for how social media plays into our social lives, and how the swipe-right culture has infiltrated every aspect of dating. When Hank says he is going to leave Jessie a voicemail after meeting her for the first time, Milo is horrified. "That's psychotic," he gasps. Funny observations are made about the difference between showing up in someone's Instagram feed as opposed to their Instagram stories. The phrase "I want to date myself for a while" is rightfully lampooned. People spout weighty wisdom, only to admit they saw it in a "meme on Instagram." Feingold is in tune with the millennial-generation's frame of references (for example, Wendy doesn't want to go out one night because she's watching "Harry Potter"). It's a good script.

There is a roadmap for this kind of "are we or are we not dating?" material. "Friends with Benefits" handled it well, and was—unlike "Dating & New York"—frank about the characters' explosive sexual chemistry. "Dating & New York" is strangely sexless. "Sleeping with Other People" treads in similar waters, as does the recent "Night Owls," a two-hander I really enjoyed (and reviewed for this site). "Dating & New York" has the "comedy" part of the equation but not the "romantic." Hank and Jessie are interesting to watch. They are also funny and romantic. Wendy and Milo are often funny separately, but they aren't funny together, and they aren't romantic. This is insurmountable. 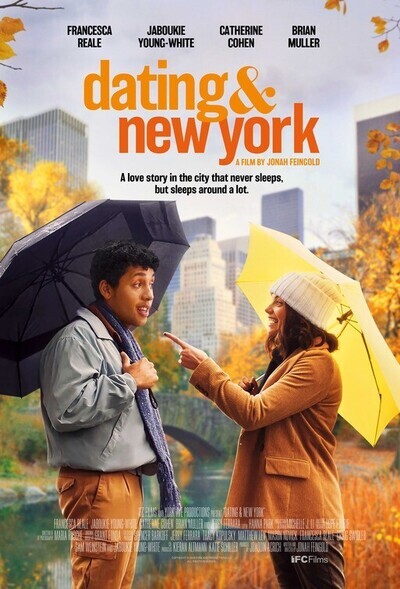