Sleeping with Other People

Movie morals tell us that in the horror genre, the two leads of writer/director Leslye Headland's cheater love story "Sleeping with Other People" would not survive the first act. Likewise, in a Hollywood romantic comedy they'd be all alone at the end, designated as "the wrong one" in the shadow of cleaner, more monogamous leads. In a refreshing change to these unwritten rules, Headland's Sundance indie "Sleeping with Other People" is about two promiscuous New Yorkers who are not exempt from meaningful relationships, they just can't resist the urges that destroy them. As Headland defined the movie herself at the Utah festival during its world premiere, "Sleeping with Other People" is "'When Harry Met Sally' for assholes."

In the film, Jason Sudeikis and Alison Brie play decent people albeit with darker pasts. Jake (Sudeikis) is a well-known womanizer and romantically challenged, who will go so far as to cheat to break up relationships instead of doing so nobly. Meanwhile, the woman he lost his virginity to in college, Lainey (Brie), has just destroyed another relationship by cheating on them with recurring fling Matthew (Adam Scott), an OB/GYN who cheats on his own wife with her. Of all places, Jake and Lainey reconnect years later outside of a sex addiction meeting, and with their shared problems they begin a friendship that becomes strictly platonic. They spend a lot of time together, but especially with Lainey going to medical school soon, and Jake's penchant to ditch anyone that he sleeps with, they decide to keep their connection hands-off, but to still confide in sexual details as they look for love in other people. This is not so easy, as all romantic comedies also tell us. As their friendship develops, the movie take on its own brand of romance, with openly sexual repartee and an explosive amount of bottled hormones between its two romantic leads.

As the member of the movie couple that has to face her darkness more head-on, Lainey is a breakout role for Brie (previously more noted on the silver screen for supporting roles). She treats this character with a organic sweetness, but also a liberated sense of humor, as with a scene in which, while on drugs, she dances to David Bowie's "Modern Love" to entertain kids at a birthday party. Brie nicely balances the movie's typical, and atypical features as it blazes a trail for other endearingly flawed rom-com leads to come.

Headland's interest in focusing on people wrestling with monogamy and sexuality is fulfilled by a few other noteworthy supporting characters. Jason Mantzoukas and Andrea Savage play a married couple, who unlike similar roles in many other rom-coms, are in a happy marriage. In this film, they're also in a very communicative one, as they talk comfortably about each other's past sexual partners, while trying to crack each other up (and we laugh with them). In contrast, Adam Scott creates a striking villain for "Sleeping with Other People," albeit with his small frame, thin mustache, and the constant reminders we get from Jake that Scott's character was a thorough dork in college. Becoming the temptation to Lainey that she's always needed nonetheless, Matthew shows the length of empathy that this movie has for cheaters—it believes in those who are trying to work on their issues, but it sees those who are stuck in the harmful lies as tragic. Scott gives a straight-faced darkness to this character, which is only broken at the end by some unfortunate close-ups that turn a scarring expression into a redundant one.

Headland is in full control of her moral compass. There's not a phrase of judgment or slut-shaming to be found in this film about serial cheaters, nor is any discussion muted about sexual content. Sex is not means for punishment, but an open, powerful subject. And even when the story focuses on the characters' self-inflicted darkness, they have a high self-awareness. Aesthetically, "Sleeping with Other People" has a mainstream look, including walk-and-talk scenes in Central Park or the middle of NYC traffic. It's a smooth variation on the type of tale we've heard before, but especially with characters like these, it can still have something new to say. 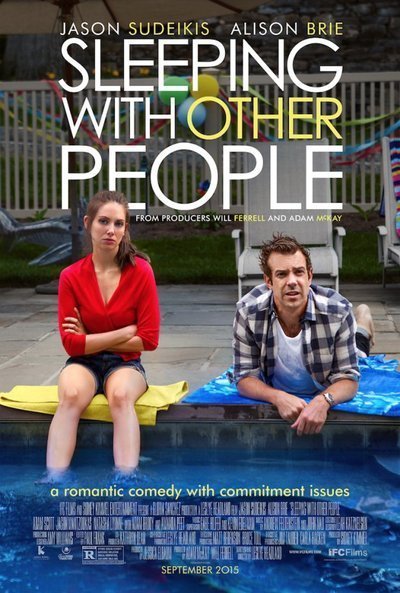 Rated R strong sexual content, language including sexual references, and some drug use