By the bitter end of its eight-season run, HBO’s “Entourage” had twisted its own narrative to a degree that it was barely recognizable from the beginning of the series. When it started, “Entourage” was the story of three average guys and their decidedly not average best friend with the movie-star good looks, trying to make it in the cutthroat world of Hollywood with only their loyalty to each other and NYC roots to keep them above the spoiled fray. We could relate to Vinny, Eric, Johnny and Turtle. By the end, the boys of “Entourage” were men, and they were the exact kind of narcissists that the show felt like it mocked at the beginning. Success was the most important thing in their lives, and the show became little more than a story of a dream fulfilled, despite the occasional laugh. It wasn’t about the guy who went to Hollywood and stayed himself, bro. It was about the guy who went to Hollywood and slept with models, had all the new toys, won awards, etc., bro.

Four years after “Entourage” went off the air (although it feels much longer), creator Doug Ellin is back with the inevitable film version of his show, continuing the same tonal problems of the last few seasons of the program only in a longer, bigger, more misogynist form. Much like the series, even in its lowest points, there are still a few laughs from the supporting cast, and Ellin paces the piece well (it doesn’t feel nearly as long as the neverending “Sex and the City” movies), but “Entourage” mistakenly keeps its characters floating in rarefied air, giving us no way to relate to them or care about them. Vinny and his buddies have become easier to correlate with the Kardashians than the dreamers they used to be. And that makes for a film that keeps its audience at a distance, never surprising them at all narratively and barely moving the needle for its characters. It is fan fiction in film form.

After ending a marriage that lasted only nine days with a hot person party in Ibiza (“Entourage” takes place in that dream movie world in which every extra in every scene from the people walking down the street to all the patrons of a restaurant could be a fashion model), Vinny Chase (Adrian Grenier) wants to get back in the movie game. He calls up Ari (Jeremy Piven) and convinces him to re-join his team as the producer on his next flick, a futuristic take on the Stevenson classic, “Hyde.” One catch: Vinny wants to direct.

Ellin’s script ignores most of the production process, immediately zipping us forward to days after filming has wrapped. Ari and his producing partners, including Texan walking-stereotype financiers played by Billy Bob Thornton and Haley Joel Osment, still haven’t seen a cut of the film, which Vinny is clearly apprehensive about showing to anyone. Part of the problem is that he needs more money on the already over-budget film to finish post-production. Ari agrees to go to Texas to talk to the money men about getting the cash, but Chase is going to have to get over his nerves and show the movie to everybody soon.

Meanwhile, E (Kevin Connolly) is having a baby with Sloan (Emmanuelle Chriqui) even though the two aren’t together any more. Which means he gets to have sex with multiple people one day and go to Lamaze the next. E and Sloan were always one of the weaker subplots of the HBO show and nothing has changed here. In better news, Johnny Drama (Kevin Dillon) gets to steal a few scenes with a solid arc about his “baby bro”’s movie being the one that finally gives him a break. Finally, Turtle (Jerry Ferrara), who seems to have made a million dollars for every pound he’s lost, which is quite a few, almost literally runs into Ronda Rousey, and tries to start a relationship with her.

The VERY little tension of “Entourage” comes when the son of Chase’s main financier, played with smarm by Osment, reports back that he hates the cut of “Hyde” that he’s seen, especially the four scenes that include Johnny Drama. Will Vinny cut out his brother and betray his vision to get the movie done? Have you seen the show?

At the end of HBO’s “Entourage,” the characters were wildly successful, rich and happy. Guess what? They still are! Rather than take any chances, Ellin barely wrote a plot for the “Entourage” movie, using his time instead to call in celebrity cameos and think of the prettiest locations in which to shoot them. Most of the dialogue is forced and unnatural, especially in the Connolly/Chriqui and Ferrara/Rousey subplots, but that’s because it doesn’t matter what people say in the world of “Entourage.” All that matters is who they party with, who they sleep with, and how much money they make. And the film suffers greatly from a plague of TV-to-film adaptations in that it gets strikingly repetitive given that the people behind it are used to writing 30-minutes narratives and spin their wheels when they try to go feature-length. Without Piven and Dillon to keep it entertaining, it would be absolutely dreadful.

“Entourage” ended in such a way that I don’t think even diehard fans of the HBO show were overly concerned about Vinny and the boys. There were no loose ends to tie up. And, in that sense, “Entourage” feels like another victory lap for characters who had already won the race of life. Instead of challenging his characters or giving them something new to do, Ellin just high fives them on the way to the winner’s circle. 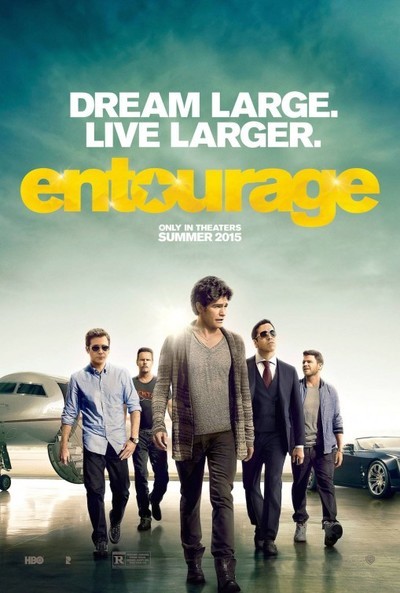 Rated R for pervasive language, strong sexual content, nudity and some drug use