There's a scene in "Dark Night" where a young woman sits on a curb with police lights washing over her; a tight closeup of one of her eyeballs makes it seem as if the orb is light from within by red and blue. There's also a very long lateral tracking shot in the film of a surly young man walking past a chain link fence, and the diamond pattern of the chain link strobes and flashes as he walks. There's a tight closeup of the eyes of another young man, this one with close-cropped hair, staring while the soundtrack erupts with the sound of photographers' flashbulbs going off and reporters shouting questions, then the movie cuts to a shot from behind the young man's head as he stands in a backyard staring at a house. "Dark Night" has a shot of a parking lot and an adjacent road that swivels and zooms like a Google Earth map, and long static takes of people looking at things: malls; televisions; their own images in the screens of cell phones.

It doesn't replicate any details leading up to the shooting itself, in which a heavily armed and deeply disturbed young man with a shock of dyed-red hair burst into a multiplex theater in Aurora, Colorado, during a midnight screening of "The Dark Knight Rises," set off tear gas grenades, and killed 12 people and injured 70. Rather, it is a film about the conditions that led to the massacre. Okay, it's not that either. It's a quasi-experimental drama, shot in Sarasota, Florida with a nonprofessional cast, about the culture of isolation that contributes to the culture of ... Sorry, the alienated nature of the self-image in the age of social media and ... Well, no. No, not that either.

That's a major demerit when a film tries to deal with material this complex and wrenching. "Dark Night" is directed by Tim Sutton, who made the musical drama "Memphis" in the same vein. It is photographed by the great French cinematographer Hélène Louvart with deep knowledge of what light does to faces and to the textures of walls and furniture and skin, and edited by Jeanne Applegate in an elliptical, austere style. If skill alone were a determinant of quality, this would be a four-star classic.

But I've seen this film twice and I'm just not convinced it's all that interested in the subjects it claims to be interested in. And that's a deal-breaker of a problem. My friend Greg Cwik's article about the gun culture of the former Confederate states rings more true to me than anything in "Dark Night," and has a lot more substantive things to say about Sutton's subject matter than Sutton does.

Interestingly, Sutton has cited Gus Van Sant's "Elephant," a similarly opaque, eerily beautiful feature about the Columbine massacre, as a key inspiration. Not too many people besides film buffs remember this, but Van Sant drew some criticism for treating Columbine, then America's bloodiest gun massacre, as raw material for a series of elegant tracking shots and lovingly composed images of good-looking teenagers. But compared to "Dark Night," "Elephant" seems like a model of caution and exactness. The movie has a great eye and a great ear but I didn't sense any soul in it, much less an authentic emotional or intellectual connection to the event that inspired it. The chronological games and elliptical editing deny you insight into any particular character. That means that when you look into the eyes of a certain character and wonder if that character will turn out to be the shooter, you have no solid information with which to make an educated guess.

The idea of structuring a moody, indirect art house drama so that you spend the whole film guessing which character is going to gun down a lot of people is problematic in its own way. It turns murder into a cinematic game. I doubt the filmmakers meant to do that, and would probably be horrified to see their work written about in that way, but absent of any sense of psychology—a sense that the characters have been thought about as human beings rather than as objects to be posed, directed and photographed—that's what comes across.

Like the brilliant "Cameraperson," and such image-driven, free-associative documentaries as "Koyaanisqatsi," but lacking in precision and focus, not to mention actual ideas that inspire a reaction besides "Huh," it's the kind of movie where both meaning and importance are imposed from without. Watching it cold is a bit like regarding an abstract painting in a gallery and not having any particular response to it until you read the little placard on the wall, then think, "Oh, right, yes, the relationship between red and brown expresses the inevitability of decay."

Sometimes the sound is out of sync, sometimes a scene goes silent for a long time, sometimes you spend a long time looking at people through doorways that hide them. These are counter-intuitive, even audacious directorial choices, but they feel too much like riffs, and I don't believe a movie about this subject should be so coy and playful. The decisions to have one of the male characters dye his hair orange like the Aurora shooter and briefly show footage of the real life killer on a TV screen cross the line into sickening. The movie is borrowing momentousness from Aurora to make us think it has something to say about the forces that created Aurora.

It's one thing to make a movie that peers at its subject from around corners and behind trees and fences and shows you the outline of the thing but not the thing itself, creating a sort of absent presence—a sense of existential dread that plugs straight into the heart of 21st century American alienation and gun violence. It's quite another to make a movie like this one, which seems to be playing games with us to no defensible end, and succeeds mainly in impressing the viewer with the film's production values and atmosphere and use of negative space. At its prettiest and most self-indulgent, it plays like a cinematographer's reel with a massacre at the end. 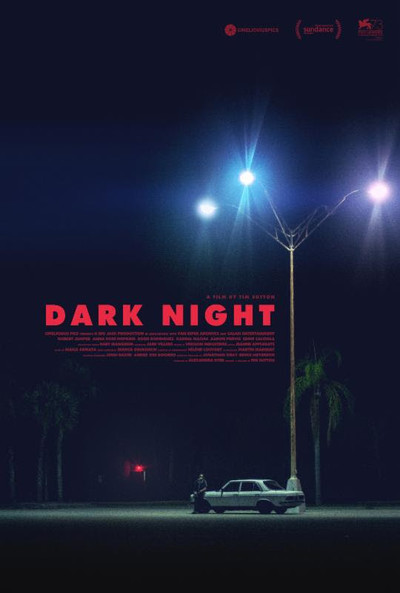