And the Oscar goes to ... Nick Kroll as Professor Poopypants.

That's not going to happen, of course. Films as knowingly goofy and childish as "Captain Underpants: The First Epic Movie," a DreamWorks feature about two friends who create an unlikely superhero and battle a super-villain to save their school, don't get nominated for Oscars, even for Best Animated Feature. They don't give out little gold men for vocal performances as supporting characters in cartoons, either, because there is no such category. Nevertheless, Kroll, a comedian and actor best known for "The Kroll Show" and "The League," deserves above-and-beyond recognition for his irrepressibly silly voice as the movie's pint-sized, German-accented mad scientist bad guy, who poses as an elementary school science teacher and has flying wings of white hair poking out from his acorn-shaped head and wants to neutralize every living person's sense of humor so that they will never again laugh at his name, Professor Pee-Pee Diarrheastein Poopypants, Esq.

Remember when you were a kid and the funniest of your friends would do a specific silly voice that made you laugh no matter what they said, and once he figured out what an easy mark you were, he'd do the voice all the time, sometimes he did it right before you took a sip of orange juice to make you do a spit take? That's the kind of voice Kroll gives this character: an orange juice spit-take voice. He's a little bit Mel Brooks' The 2000-Year Old Man, a little bit Dr. Scott from "The Rocky Horror Picture Show," with a touch of Peter Sellers as "Dr. Strangelove," but there's an inner-directed exasperation to the performance that centers it and sometimes makes Poopypants comic book-deep, like a villain in a good Tim Burton movie. (Remember those?)

Yes, Poopypants is evil, and so fiendish and relentless that best buddies George (Kevin Hart) and Harold (Thomas Middleditch) and their principal-turned-superhero, Captain Underpants (Ed Helms), who was created with a hypnosis ring taken from a cereal box, seem incapable of stopping him and his super-weapon, a walking, growling toilet that spits emerald goo derived from the school's discarded lunchroom food. (The toilet was originally a science fair entry made by the resident power-worshiping nerd, Jordan Peele's Melvin; long story.) But you can also see why Poopypants is in a terrible mood 24/7. The way Kroll savors every syllable of his alternately peevish, self-pitying and nonsensical dialogue—aided mightily by the animators, who've given the character a fireplug body and a waddling walk—transforms the ridiculous into the sublime. The moment where George solemnly tells Poopypants that his problem is that he can't laugh at himself, and Poopypants whines, "Oh, is that really what my problem is, Oprah?" made me laugh so hard I thought my son was going to ask me to leave.

The rest of the film is nearly as good. It suffers from a rushed, jumbled quality, and it displays a lot of tics that have become tiresome because DreamWorks has been doing them over and over again for 15+ years, ever since they worked in the original "Shrek": these include frenetic action scenes, up-to-the-minute slang that will be dated six months from now, and the use of workhorse pop songs, including Aretha Franklin's "Respect," to pump up humor and sentiment even though the scene might've played fine without them. (It's like watching a kid put extra sugar on sugary cereal.)

But there's also a lot to like here. I haven't been this pleasantly surprised by a big-budget, little-kid focused animated film since the original "Cloudy With a Chance of Meatballs." It's straight-up ridiculous from start to finish, from the razor-toothed mini-toilets that creep across the screen at the end to its many throwaway sight gags, like the bit where the boys dig through a drawer where the principal has stashed their confiscated toys and withdraw a squirt rifle twice the size of the drawer. It's at its best when it's cutting loose and delivering slapstick and fantasy sequences of escalating absurdity. When George and Harold are separated by Captain Underpants' humorless alter-ego, Mr. Krupp, they imagine themselves separated by a desolate rocky plain, then a sea of stars, then a galaxy.

Aside from a few earnest, brief paeans to the power of friendship and the necessity of recognizing others' loneliness, there's not much that seems intended to turn kids into better people, and that's a big reason why so many of them are going to like it. The movie reminded me a little bit of my daughter's comment after visiting the various Disney World theme parks at age eight: "My favorite one is Magic Kingdom, because that's the only one where you don't have to learn anything."

Director and co-writer David Soren and screenwriter Nicholas Stoller clearly adore the source material, a series of paperback tall-tales aimed at ten-year old children's giggle-centers. They've preserved Pilkey's exuberant drawing style as well as his understanding of what sort of humor is guaranteed to make young kids laugh until their sides hurt: clever, talkative hustlers getting out of jams they created themselves; snooty or hateful characters getting their comeuppance; anything having to do with poop, toilets, underwear, yucky lunchroom food, and adults falling down and being humiliated and chastising hordes of laughing children for not respecting their dignity; and funny voices. Always funny voices. Orange juice spit-take funny.

Parents and children who have read Pilkey's books together may appreciate the sheer don't-give-a-hoot nerve that the filmmakers have brought to a project that's a thousand kilometers away from being reputable. They've approached this compendium of elemental slapstick and unabashed childishness with the reverence that the Coen brothers brought to "No Country for Old Men." The 3-D animation is designed and executed in an unrealistic manner, paying loving attention to light and shadow but tossing the laws of physics out of the nearest classroom window. And whenever you start to feel suffocated by the bright color and excess of detail, the film will cut to a sequence in a different style: black-and-white line drawing, mid-century, UPA-style animation, sock puppetry.

There's even a flip book action-scene interlude. As any true "Captain Underpants" fan will tell you, the flip book interludes in Pilkey's books are the best parts. Here, the filmmakers haven't just included one, they've gone to the trouble of reproducing the inevitable moment where the flippers get so excited that they tear the page. This happened to me more than once while reading the books to my son when he was small, years ago. It's not often that a movie puts a spotlight on a mundane ritual in your own life that you never realized was profound and says, "You probably forgot about this, but I want you to remember it and savor it, because it meant something." It happened while watching this ridiculous cartoon. They recaptured it, all of it, down to the ecstatic pause while the parent fetches Scotch tape to repair a torn page. I never expected an adaptation of "Captain Underpants" to deliver a version of the madeleine moment in Marcel Proust's "À la recherche du temps perdu." But here we are. 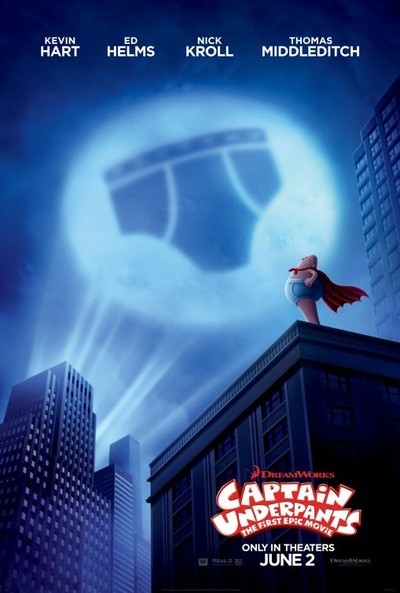 Writer (based on the epic novels by)