“Bombshell” depicts, with equal parts bemusement and outrage, the explosion that occurred when the women of Fox News Channel dared to expose the culture of sexual harassment that had prevailed for so long at the cable television juggernaut.

More than a year before allegations of abuse and harassment against Harvey Weinstein would spark the #MeToo movement and crater his career, there was Roger Ailes, the fearsome TV news titan whose personal empire came crumbling down. Director Jay Roach’s film follows those fraught days during the summer of 2016, when “Fox & Friends” morning show co-host Gretchen Carlson filed a lawsuit against the former Fox News CEO and Megyn Kelly—the network’s biggest star at that point—came forward with Ailes harassment tales of her own.

It’s all weighty, serious material with huge stakes—emotionally, culturally and financially. But Roach, working from a script by Charles Randolph, finds a tricky balance of portraying these events with a sprightly tone while crafting a steadily building tension. “Bombshell” is both light on its feet and a punch in the gut.

This is familiar territory for both: Roach is the Emmy-winning director of “Game Change,” about Sarah Palin’s rise to prominence as John McCain’s running mate in the 2008 Republican presidential election. Randolph is the Oscar-winning co-writer of “The Big Short,” which got its arms around the complicated topic of the 2008 recession by presenting it in amusingly inspired and easy-to-understand ways. “Bombshell” combines elements of both: the dead-on depictions of famous media and political figures and some playful fourth-wall breaking to bring us behind the scenes of this insular—and infamously paranoid—world.

The person to pull the curtain aside and invite us in is Charlize Theron as Kelly, embodying the anchor with eerie accuracy from the first moment we see her. In no time at all, you truly feel as if you’re watching Kelly herself, and the fact that she’s doing an extended walk-and-talk to explain the inner workings of the conservative news network accomplishes a couple of crucial things right off the top. Kelly shares in conspiratorial tones who the players are, how the power structure operates and what people must do to survive—especially if they want those coveted spots on air. But by talking directly to us, much of the time with a wink and a smile, Theron also softens Kelly’s icy, rigid persona, making her more sympathetic and accessible.

So complete is the transformation, Theron quickly makes you forget that you’re watching an actress playing Megyn Kelly. But this is no gimmick. It’s a miracle of makeup design, sure—the cheekbones and the turned-up nose, with eyeliner and thick, fake lashes doing much of the heavy lifting to complete the look. And Theron brilliantly captures the tone and inflection of Kelly’s voice—the distinctive rhythm, the deep richness and the selective, seductive breathiness. But more importantly, she gets Kelly’s essence, her toughness and her need to assert herself as authoritative and unflappable at all times.

Maintaining such radiant confidence becomes an increasing challenge for Kelly once Carlson (Nicole Kidman, conveying both on-air sweetness and off-air ambition) brings her lawsuit against Ailes (John Lithgow, also undergoing a significant physical transformation). (This is a great, showy role for Lithgow, giving him plenty of room to show his range as he portrays the profane, predatory and paranoid sides of the portly executive’s personality.) And as other high-profile women come forward with vocal support of Ailes, Kelly’s silence becomes even more conspicuous.

In the midst of all this, an ingénue rises: a young woman who’s beautiful, blonde and anxious to be a television star, just like Kelly and Carlson—only she’s about a generation younger. Margot Robbie shines in the role of Kayla, a rare character who’s not based on an actual person but rather a composite of various network employees who suffered through Ailes’ lewd advances. The ever-magnetic Robbie gets a dramatic arc to play, going from wide-eyed true believer (“I see myself as an influencer in the Jesus space,” she says with total sincerity while pitching herself for a position) to disillusioned whistle-blower. She also gets the most deeply uncomfortable scene in the film, as we see Kayla endure an agonizing meeting with Ailes in which he asks her to stand and hike up her black dress higher and higher. Robbie makes the character’s vulnerability and fear palpable, and Roach treats the pain of the moment with decency.

Also during the summer of 2016 – and yes, it really does feel like a lifetime ago - Donald Trump is rising to power as the Republican presidential nominee, and his trajectory is becoming intrinsically intertwined with that of his favorite TV news channel. “All Trump does is watch Fox,” says Rob Delaney as Kelly’s producer. And so Kelly’s clash with Trump as debate moderator—based on a question she asked him about his treatment of women over the years—further makes her a target and heightens the kind of scrutiny and misogyny she and so many women face when they tell their stories of abuse and harassment. “Bombshell” tries to encompass all of that for context, and it does so with an intermittent, quasi-documentary style that doesn’t always work. Roach includes actual footage—and sometimes seamlessly inserts his actors into the images—but he also employs hand-held camerawork and snap-zooms as if he were directing an episode of “The Office,” and the approach feels inconsistent and a little jarring.

But the performances are always compelling, from the lead actresses doing top-notch work—especially in a scene in which they all share an awkward elevator ride, silently—to the supporting players down the line. Some of the performances are startlingly dead-on, like Alanna Ubach’s Jeanine Pirro and Allison Janney’s Susan Estrich. For one fantastic, fleeting second, you will believe that Kevin Dorff is Bill O’Reilly. Others don’t quite hit the mark, but the whole newsroom culture comes vividly to life, both through production design and the kind of gallows humor that keeps journalists sane during the worst of times. Along these lines, Kate McKinnon comes hilariously to the rescue as a closeted lesbian producer on O’Reilly’s primetime show and the voice of reason who explains to Kayla the simple guidelines for suggesting segment ideas: “Frighten, titillate. Frighten, titillate.”

And the great costume designer Colleen Atwood deserves special attention for getting the all-important Fox News anchor wardrobe just right. An array of form-fitting, jewel-toned sheath dresses and painfully high heels is meant to convey just the right mix of trustworthiness and sex appeal. And the hemlines can never be too short: As Ailes himself repeatedly insists, this is a visual medium. But a peek inside the wardrobe closet reveals the discomfort these women endure in the name of ambition, and the objectification they’re willing to endure for fame.

“Bombshell” may not change anyone’s minds—especially not those viewers who, as the film points out, have the Fox News logo burned into the bottom corner of their TV screens because they never change the channel. But it also doesn’t try to be fair and balanced, to borrow the network’s slogan—and its incisive point of view is one of the film’s many great strengths. 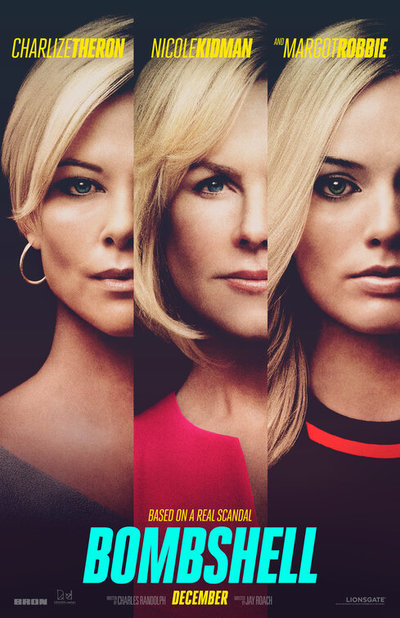 Rated R for sexual material and language throughout.