“Blonde” abuses and exploits Marilyn Monroe all over again, the way so many men did over the cultural icon’s tragic, too-short life. Maybe that’s the point, but it creates a maddening paradox: condemning the cruelty the superstar endured until her death at 36 while also reveling in it.

And yet writer/director Andrew Dominik’s film, based on the fictional novel by Joyce Carol Oates, remains technically impeccable throughout, even though it feels like an overlong odyssey at nearly three hours. The craftsmanship on display presents another conundrum: “Blonde” is riveting, even mesmerizing, but eventually you’ll want to turn your eyes away as this lurid display becomes just too much. My personal breaking point was a POV shot from inside Marilyn’s vagina as she was having a forced abortion performed on her. A lengthy, extreme close-up of a drugged-up Monroe fellating President Kennedy while he’s on the phone in a hotel room also feels gratuitous and is probably why the film has earned a rare NC-17 rating.

Did any of this really happen? Maybe. Maybe not. What you have to understand from the start is that “Blonde” is an exploration of the idea of Marilyn Monroe. It’s as much a biopic of the film star as “Elvis” is a biopic of Elvis Presley. It touches on a series of actual, factual events as a road map, from her movies to her marriages. But ultimately, it’s a fantasia of fame, which increasingly becomes a hellscape. That’s more exciting than the typical biography that plays the greatest hits of a celebrity’s life in formulaic fashion, and “Blonde” is consistently inventive as it toys with both tone and form. By the end, though, this approach feels overwhelming and even a little dreary.

As Marilyn Monroe—or her real name of Norma Jeane, as she’s mostly called in the film—Ana de Armas is asked to cry. A lot. Sometimes it’s a light tear or two as she draws from her traumatic childhood for an acting class exercise. Usually, it’s heaving sobs as the cumulative weight of mental illness and addiction takes its toll. When she’s not crying, she’s naked. Frequently, she’s both, as well as bloody. And in nearly every situation, she’s either a pawn or a victim, a fragile angel searching for a father figure to love and protect her.

Certainly, some of this is accurate—the way Hollywood power brokers regarded her as a pretty face and a great ass when she wanted them to consider her a serious actress and love her for her soul. De Armas gives it her all in every moment; she’s so captivating, so startling, that you long for the part to provide her the opportunity to show more of Marilyn’s depth, to dig deeper than the familiar cliches. She’s doing the breathy, girlish voice, but not perfectly—traces of her Cuban accent are unmistakable—and that’s OK given the film’s unorthodox approach. More importantly, she captures Monroe’s spirit, and often looks uncannily like her. Following standout supporting turns in movies like “Knives Out” and “No Time to Die,” as well as the delicious trash that was “Deep Water,” here is finally the meaty, leading role that showcases all she can do. She’s so good that she makes you wish the role rose to her level.

“Blonde” is a fever dream from the very start. Working with cinematographer Chayse Irivn (“BlacKkKlansman,” Beyonce’s “Lemonade”) and frequent musical collaborators Nick Cave and Warren Ellis, Dominik sets the scene with impressionistic wisps of sight and sound. Shadows and ethereal snippets of score mix with ash from a fire in the Hollywood hills blowing through the night sky. The phone rings loudly. The camera swish pans to the left. We’re immediately on edge. It’s Los Angeles 1933, and young Norma Jeane (a poised and heartbreaking Lily Fisher) is enduring horrific physical and emotional abuse from her volatile and hyperverbal mother (a haunting Julianne Nicholson, always great).

Dominik (“The Assassination of Jesse James by the Coward Robert Ford”) proclaims his restless style from the beginning—jumping around not just in time, but from high-contrast black and white to rich Technicolor and in between various aspect ratios. Sometimes, the color palette is faded, as if we’re looking at Marilyn in a long-ago photograph. Sometimes, the sound design is muted—as in her classic performance of “I Wanna Be Loved by You” from “Some Like It Hot”—to indicate the confusion of her inner state. It’s all thrilling for a while, and de Armas strikes a magnetic figure as the young Marilyn in both her vulnerability and her ambition.

An imagined three-way romance with Charlie Chaplin Jr. (Xavier Samuel) and Edward G. Robinson Jr. (Evan Williams) brings a welcome vibe of fun and frolic; they’re both beautiful and flirtatious, smoldering and seductive. And it becomes clear as the movie progresses that they’re the only men who loved her for her true self as Norma Jeane while also appreciating the beguiling artifice of Marilyn. This relationship also teaches Norma Jeane to lose herself in the mirror in order to find the famous persona she’ll present to the outside world: “There she is, your magic friend,” “Cass” Chaplin purrs as he caresses her from behind. And Dominik will return to that image of Norma Jeane beseeching her own reflection as a means of conjuring strength. The character’s stark duality gives de Armas plenty of room to show off her impressive range and precise technique.

But too much of “Blonde” is about men chewing Marilyn up and spitting her back out. A studio executive known only as “Mr. Z”—presumably as in Zanuck—rapes her when she visits his office about a part. New York Yankees legend Joe DiMaggio (Bobby Cannavale) seems like a decent and tender husband until he turns controlling and violent. Her next husband, playwright Arthur Miller (an understated Adrien Brody), is patient and kind yet emotionally detached—but by the time Marilyn is married to him, anxiety, booze and pills have wrecked her so significantly that no one could have helped.

She calls these men “Daddy” in the hope that they’ll function in place of the father she never knew but desperately craved, but in the end, everyone lets her down. And “Blonde” does, too, as it strands de Armas in a third-act sea of hysteria. As for the film’s many graphic moments—including one from the perspective of an airplane toilet, as if Marilyn is puking up pills and champagne directly on us—one wonders what the point is. Merely to shock? To show the extent to which the Hollywood machinery commodified her? That’s nothing new.

“Blonde” is actually more powerful in its gentler interludes—when Marilyn and Arthur Miller are teasingly chasing each other on the beach, for example, hugging and kissing in the golden, shimmering sunlight. “Am I your good girl, Daddy?” she asks him sweetly, seeking his approval. But of course, she can’t be happy here, either. All her joyous times are tinged with sadness because we know how this story ends.

More often, Dominik seems interested in scenes like the garish slow-motion of the “Some Like It Hot” premiere, where hordes of ravenous men line the sidewalks for Marilyn’s arrival, frantically chanting her name, their eyes and mouths distorted to giant, frightening effect as if they wish to devour her whole. He similarly lingers in his depiction of the famous subway grate moment from “The Seven Year Itch,” with Marilyn’s ivory halter dress billowing up around her as she giggles and smiles for the crowds and cameras. (The costume design from Jennifer Johnson is spectacularly on-point throughout, from her famous gowns to simple sweaters and capri pants.) We see it in black-and-white and color, in slow-motion and regular speed, from every imaginable angle, over and over again.

After a while, it becomes so repetitive that this iconic, pop culture moment grows numbing, and we grow weary of the spectacle. Maybe that’s Dominik’s point after all. But we shouldn’t be.

In limited theatrical release tomorrow. On Netflix on September 23rd. 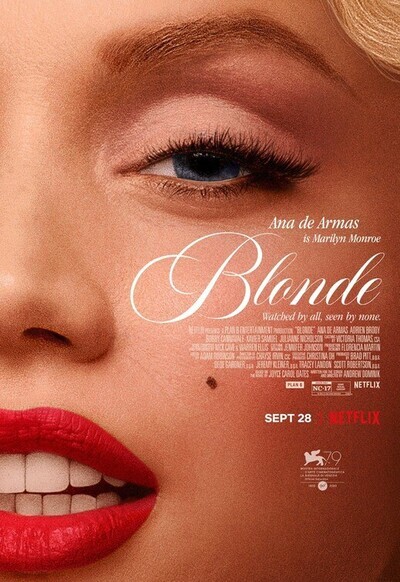 Adrien Brody as The Playwright

Bobby Cannavale as The Ex-Athlete

Caspar Phillipson as The President

Rob Brownstein as The Acting Coach

Ethan Cohn as Assistant to the Director

Mike Ostroski as The Writer