No Time to Die

After months of delays, the 25th official James Bond film is finally here in “No Time to Die,” an epic (163 minutes!) action film that presents 007 with one of his toughest missions: End the era that most people agree gave new life to one of the most iconic film characters of all time. Everyone knows that this is Daniel Craig’s last film as Bond, and so “No Time to Die” needs to entertain on its own terms, provide a sense of finality for this chapter of the character, and even hint at the future of the spy with a license to kill. It would also help a bit to clean up some of the mess left by “Spectre,” a film widely considered a disappointment. All of the boxes that need to be checked seem to drag down “No Time to Die,” which comes to life in fits and starts, usually through some robust direction of quick action beats from director Cary Joji Fukunaga, but ultimately plays it too safe and too familiar from first frame to last. Even as it’s closing character arcs that started years ago, it feels like a film with too little at stake, a movie produced by a machine that was fed the previous 24 flicks and programmed to spit out a greatest hits package.

Long gone are the days when a new Bond movie felt like it restarted the character and his universe as a standalone action film. “No Time to Die” seems cut more from the Marvel Cinematic Universe model of pulling from previous entries to create the impression that everything that happens here was planned all along. You don’t really have to have seen the previous four films, but it will be almost impossible to appreciate this one if you haven’t (especially “Spectre,” to which this is a very direct sequel).

And so, of course, we start with Vesper, the love of Bond’s life from “Casino Royale.” After a very clever and taut opening flashback scene for Madeleine Swann (Léa Seydoux), the film catches up with James and Madeleine in Italy, where he’s finally been convinced to go see the grave of the woman who continues to haunt him. It explodes. Is this a hint that the creators of “No Time to Die” are going to blow up their foundation and give Bond new definition? Not really, although the extended chase/shoot-out sequence that follows is one of the film’s best. (It totally had me pre-credits.)

Bond blames Swann for what happened in Italy, convinced she betrayed him, and it leads to a repeat of the “Skyfall” arc with James off the grid five years after the prologue. The deadly theft of a weaponized virus that can target a specific person’s DNA brings Bond back to the fold, although he’s first aligned with the CIA via Felix Leiter (a wonderfully laid-back Jeffrey Wright) and a new face named Logan Ash (Billy Magnussen). He’s been replaced at MI6 by a new 007 named Nomi (Lashana Lynch) and James doesn’t really trust M (Ralph Fiennes). He’s convinced M knows more about the new threat than he’s letting on (of course, he does), but at least Bond’s still got Q (Ben Whishaw) and Moneypenny (Naomie Harris) helping him behind the scenes.

It’s definitely a crowded crew of espionage experts from around the world, but these talented supporting performers are given surprisingly little to do other than push the plot forward to its inevitable ending. Lynch feels like a self-aware nod to controversy around the casting of Bond, which is cool enough, but then she’s not given much of a character to make her interesting on her own. Seydoux and Craig have shockingly little chemistry, which was a problem in the final act of “Spectre” that's deadlier here because of what’s missing from the final act, and a character is added into their dynamic in a way that feels cheap and manipulative. Ana de Armas pops up to give the film a completely different and welcome new energy in an action sequence set in Cuba, only to leave the movie ten minutes later. (I truly felt the MCU-ness here in that I expect her to reappear in Bond 26 or 27.)

As for villains, Christoph Waltz returns as the slow-talking Blofeld, but his big scene doesn’t have the tension it needs, ending with a shrug. And then there’s Rami Malek as the superbly named villain Lyutsifer Safin, another heavily-accented, scarred, monologuing Bond baddie who wants to watch the world burn. The polite thing to say is that Malek and the filmmakers purposefully lean into a legacy of Bond bad guys, but Safin is such a clear echo of other villains it’s as if the next Avengers movie had another big purple guy named Chanos. Craig's Bond deserved a better final foe, one who’s not really even introduced into the narrative here until halfway through.

What keeps “No Time to Die” watchable (outside of a typically committed turn from Craig) is the robust visual sense that Fukunaga often creates when he doesn’t have to focus on plot. The opening sequence is tightly framed and almost poetic—even just the first shot of a hooded figure coming over a snowy hill has a grace that Bond often lacks. The shoot-out in Cuba moves like a dance scene with Craig and de Armas finding each other’s rhythms. There’s a riveting encounter in a foggy forest and a single shot climb in a tower of enemies that recalls that one-shot bravura take from “True Detective.” In an era with fewer blockbusters, these quick visceral thrills may be enough.

When “Casino Royale” burst on the scene in 2006, it really changed the action landscape. The Bond mythology had grown stale—it was your father or even your grandfather’s franchise—and Daniel Craig gave it adrenaline. For something that once felt like it so deftly balanced the old of a timeless character with a new, richer style, perhaps the biggest knock against “No Time to Die” is that there’s nothing here that hasn’t been done better in one of the other Craig movies. That’s fine if you’re such a fan of Bond that reheated leftovers still taste delicious—and even more so after waiting so long for this particular meal—but it’s not something anyone will remember in a few years as films like “Casino Royale” and “Skyfall” define the era. Maybe it all should have ended a couple movies ago. Then we all would have had time for something new.

Only in theaters on October 8th. 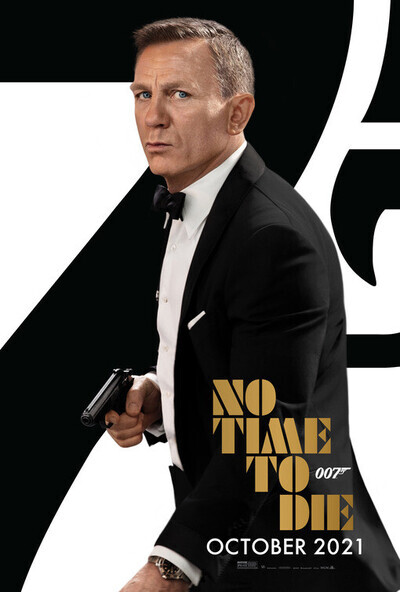 Rated PG-13 for sequences of violence and action, some disturbing images, brief strong language and some suggestive material.