There’s a lot of pressure on Adrian Lyne’s “Deep Water,” a film that was basically dumped onto Hulu after Disney bought Fox and had no tolerance for a movie about horny people. Some corners of the internet have been anticipating this project as a return to “movies for adults,” a genre that has undeniably gone away in the studio production line now that almost every movie has to get a PG-13. And the fact that it’s the first film in two decades from the director of “Fatal Attraction” and “9 ½ Weeks” sets a standard for the film that might lead to disappointment. Will the “Make Movies Sexy Again” crowd give some of the storytelling bumps in “Deep Water” a pass or is this going to be further proof that the subgenre is creatively dead? Early reviews have already been divisive, and there’s no denying that some of this feels like it’s been through editing hell, especially the final act. I’m eager to see a reportedly longer version because there’s a lot here that works, including a great Ben Affleck performance and the kind of sexual tension that Americans simply don’t offer in the 2020s.

Based on the 1957 novel by Patricia Highsmith, the genius who also wrote Strangers on a Train and The Talented Mr. Ripley, which should give you some idea of the games being played here, “Deep Water” doesn’t waste time with the “happy days” of the Van Allen union. We meet Vic Van Allen (Affleck) and his wife Melinda (Ana de Armas) deep in the misery of a failed partnership. They have stuck together, seemingly for their daughter Trixie (Grace Jenkins), but there seems to be little love that remains between the couple. The first extended scene takes place at a party, where Melinda gets very drunk and flirts with a handsome young man she personally invited to the soiree. In a moment alone together, Vic tells the new beau that he killed Melinda’s last lover, who's now missing. Is he kidding? The next day he claims that he is, but the basic machination of the script by Zach Helm (“Stranger Than Fiction”) and Sam Levinson (“Euphoria”) has been set in motion: Melinda cheats, and it’s possible that Vic kills the guys with whom Melinda cheats.

That’s certainly what Don Wilson (Tracy Letts) thinks is happening, and the fact that he drives the plot is a weakness that Helm & Levinson don’t really take enough time selling. Why is this man devoting so much time and capital to his theory that Vic is a murderer? Near the end, he says something about a book, which could be the only reason, but there’s also an interesting beat when Don meets Vic and they get a little heated over how Van Allen made his money—the kind of drone technology that’s used in warfare. Has Vic always seen human life as disposable? There’s a fascinating thematic undercurrent in “Deep Water” about two people who may seem very different but are both users—Melinda uses men for pleasure and to provoke her husband. She says at one point that she does so because of the way they make her feel. These are selfish creatures, two people who give into basic instincts in ways that most moral people repress.

Affleck nails this simmering selfishness perfectly, proving to be a great fit for the world of the writer who gave us Tom Ripley. There are echoes of Affleck's work in “Gone Girl” in how he captures Vic’s temperature, the way it rises every time he sees Melinda with a new lover, including ones played by Jacob Elordi and Finn Wittrock. Why doesn’t Vic just give up? The script, especially in its final act, hints at some darker themes that a longer version probably unpacks more but Affleck and De Armas sell this psychosexual dysfunction in a way that other performers would have missed. Lyne knows exactly how to use their physical beauty and sexual chemistry on-screen, reminding viewers how rarely we see this kind of thing between major movie stars. I’d also like to add that I thoroughly enjoy how often Lil Rel Howery keeps showing up lately and being so effective in relatively small parts (he delivers in two SXSW films this year too, “I Love My Dad” and “Spin Me Round”). He’s turning into a notable asset for those looking to fill a skeptical supporting role.

While I suspect the abrupt, choppy ending (with a ridiculous choice for the closing credits) will leave people angry, “Deep Water” had done enough before then to win me over. It’s really a vicious piece of work, a movie made by a filmmaker who is unafraid to see the primal, darker parts that beautiful people hide behind their gorgeous facades. It may not be the comeback that fans of Lyne’s were really hoping for, but it’s a reminder that this kind of movie can still get made today. Even if it may not be tomorrow. 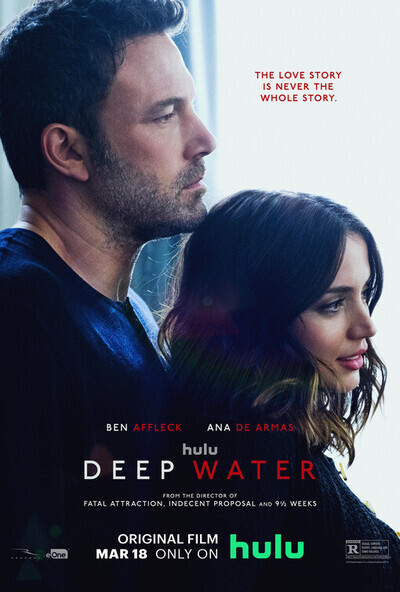 Rated R for sexual content, nudity, language and some violence.