“Elvis” brings all of the glitz, rhinestones, and jumpsuits you’d expect in an Elvis film, but without the necessary complexity for a movie from 2022 about the “King.”

Maximalist filmmaker Baz Luhrmann, who abhors visual restraint and instead opts for grand theatricality, should be the perfect creator for a Presley biopic, but isn't. Luhrmann tells us this icon’s story from the perspective of the singer’s longtime, crooked manager Colonel Tom Parker (Tom Hanks). After collapsing in his tacky, memorabilia-filled office, a near-death Parker awakens alone in a Las Vegas hospital room. The papers have labeled him a crook, a cheat who took advantage of Elvis (Austin Butler), so he must set the record straight.

From the jump, Luhrmann’s aesthetic language takes hold: An IV-drip turns into the Las Vegas skyline; in a hospital nightgown, Parker walks through a casino until he arrives at a roulette wheel. Carrying a heap of affectations, Hanks plays Parker like the Mouse King in “The Nutcracker.” For precisely the film’s first half hour, "Elvis" moves like a Christmas fairytale turned nightmare; one fueled not by jealousy but the pernicious clutches of capitalism and racism, and the potent mixture they create.

It’s difficult to wholly explain why “Elvis” doesn’t work, especially because for long stretches it offers rushes of enthralling entertainment. In the early goings-on, Luhrmann and co-writers Sam Bromell, Craig Pearce, and Jeremy Doner meticulously build around Presley’s influences. They explain how Gospel and Blues equally enraptured him—a well-edited, both visually and sonically, sequence mixes the two genres through a sweaty performance of “That’s Alright Mama”—and they also show how much his time visiting on Beale Street informed his style and sound. A performance of “Hound Dog” by Big Mama Thornton (Shonka Dukureh), and the emergence of a flashy B.B. King (Kelvin Harrison Jr.) furthers the point. Presley loves the superhero Shazam, and dreams about reaching the Rock of Eternity, a stand-in for stardom in this case. He’s also a momma’s boy (thankfully Luhrmann doesn’t belabor the death of Elvis’ brother, a biographical fact lampooned by “Walk Hard: The Dewey Cox Story”).

Though a biopic veteran, Hanks has rarely been a transformative actor. In this case, you can hear his accent slipping back toward Hanks. And the heavy prosthetics do him few favors, robbing him of his facial range—an underrated tool in his repertoire. And Hanks already struggles to play outright villains; shaping the story from his perspective takes the edge off of his potential menace. It’s a tough line for Hanks to walk, to be unsuspecting yet vicious. Hanks creates a friction that doesn’t altogether work, but feels at home in Luhrmann’s heavy reliance on artifice.

The most fascinating linkage in “Elvis” is the extrapolation of commerce and race. Parker is enamored by Presley because he plays Black music but is white. Elvis turns off the white Christian old, like the moribund country singer Hank Snow (David Wenham), and the homophobic men who consider him a “fairy.” Yet he excites the young, like Jimmie Rogers (Kodi Smit-McPhee, both actors provide fantastic comic relief), and he has sex appeal. A wiggle, if you please. Luhrmann takes that wiggle seriously, showing sexually possessed, screaming women. Butler’s crotch, in precisely fitted pink pants and shot in close-up, vibrates. Harsh zooms, quick whip pans, and a taste for horniness (by both men and women) help make the early moments of this biopic so special. As does its anti-capitalist bent, which depicts how often labor, art, and ownership can be spit out and garbled in the destructive system.

Unfortunately, “Elvis” soon slips into staid biopic territory. We see the meteoric rise of Presley, the mistakes—whether by greed or naïveté—he makes along the way, and his ultimate descent toward self-parody. His mother (Helen Thomson) dies on the most hackneyed of beats. His father (Richard Roxburgh) quivers in the shallowest of ways. Priscilla (Olivia DeJonge) appears and is handed standard tragic wife material. The pacing slows, and the story just doesn’t offer enough playfulness or interiority to keep up.

But even so, the latter portions of Luhrmann’s film aren’t without its pleasures: The performance of “Trouble,” whereby Presley defies the Southern racists who fear his Black-infused music (and sensuality) will infiltrate white America, is arresting. Cinematographer Mandy Walker’s freeze frames imitate black and white photography, like wrapping history in the morning dew. The performance of Elvis’ comeback special, specifically his rendition of “If I Can Dream” soars. During the Vegas sequences, the costumes become ever more elaborate, the make-up ever more garish, acutely demonstrating Presley’s physical decline. And Butler, an unlikely Elvis, tightly grips the reins by providing one show-stopping note after another. There isn’t a hint of fakery in anything Butler does. That sincerity uplifts “Elvis” even as it tumbles.

But all too often the film slips into a great white hope syndrome, whereby Presley is the sincere white hero unearthing the exotic and sensual Black artists of his era. B.B. King, Big Momma Thornton, and Little Richard (real-life supporters of Presley) exist solely as either bulletin board cheerleaders or alluring beings from a far-off land. While these Black artists are championed—an awareness by Luhrmann of their importance and the long and winding history of Black art moving through white spaces—they barely speak or retain any depth, even while a paternalistic Presley advances their cause.

The approach neither illuminates nor dignifies these figures. Instead, Luhrmann tries to smooth over the complicated feelings many Black folks of varied generations have toward the purported King. In that smoothing, Presley loses enough danger, enough fascinating complications to render the whole enterprise predictable. Because it’s not enough to merely have awareness, a filmmaker also has a responsibility to question whether they’re the right person to tell a story. Luhrmann isn’t. And that’s a failing that will be difficult for many viewers to ignore.

Luhrmann side-steps other parts of the Elvis mythology, including the age gap between Priscilla and Presley (the pair met in Germany when the former was 14 years old), and when Elvis became a stooge for Richard Nixon. Excluding the latter makes little sense in a movie concerning the commodification of Presley by capitalism and conservatism. Luhrmann wants to show the downfall of a doe-eyed icon by nefarious systems, but never pushes the envelope enough for him to become unlikable, or better yet, intricate and human.

That flattening easily arises from telling this story from Colonel Parker’s perspective. He doesn’t care about Black people, therefore, they exist as cardboard cutouts. He cares little for Priscilla, therefore, she has little personhood. And Parker certainly isn’t going to tarnish the image or brand of Elvis because it corrodes himself. These undesirable outcomes, facile and pointless, make logical sense considering the framing of the narrative. But what good is making a sanitized Elvis biopic in 2022? And truly, who really needs a further fortification of Presley’s cultural importance when it’s been the dominant strain for over 60 years? It’s another noxious draft in history clumsily written by white hands.

“Elvis” certainly works as a jukebox, and it does deliver exactly what you’d expect from a Luhrmann movie. But it never gets close to Presley; it never deals with the knotty man inside the jumpsuit; it never grapples with the complications in his legacy. It’s overstuffed, bloated, and succumbs to trite biopic decisions. Luhrmann always puts Butler in the best position to succeed until the credits, whereby he cuts to archival footage of Presley singing “Unchained Melody.” In that moment Luhrmann reminds you of the myth-making at play. Which is maybe a good thing, given Luhrmann's misleading, plasticine approach. 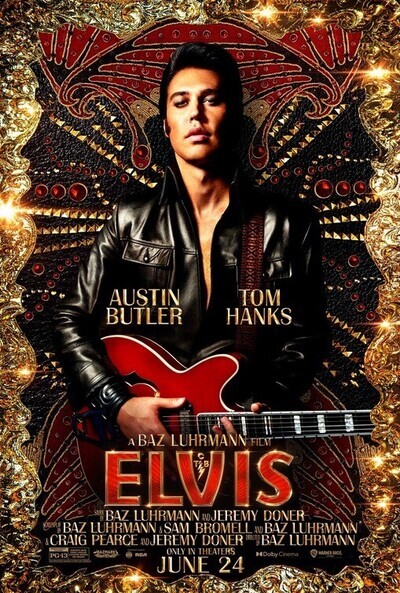