At the beginning of the summer, Chris Evans co-starred as Captain America in “Avengers: Age of Ultron,” a blockbuster sequel and yet another big-budget cog in the behemoth Marvel Cinematic Universe machine. It featured him alongside his fellow comic-book superheroes, throwing his mighty shield in the name of all that is good and righteous and saving the world (again) with the help of some high-tech special effects.

Now that summer is ending, Evans is back again, but this time he’s working both behind and in front of the camera with “Before We Go.” For his directorial debut, he took his considerable clout and fame and made a movie that couldn’t possibly be more different from the spectacles that have been his bread and butter. It’s an indie romance in which he tries to rescue one person from a terrible night rather than the entire planet for all of eternity, and there are no special effects to be found. In fact, very little here is special, despite the individual charms of Evans and co-star Alice Eve.

These photogenic and charismatic actors somehow manage to conjure zero chemistry with each other because they’re stuck playing barely-there characters in a flimsy and contrived script. The fact that its premise of two strangers walking and talking all night calls to mind superior films – mainly, “Before Sunrise” – only makes things worse. Twenty years ago, Richard Linklater created for Ethan Hawke and Julie Delpy two rich characters who shared an instant spark, and their thoughtful, analytical conversations left you feeling truly invested in what would happen once the sun came up.

In “Before We Go,” though, the characters are so vapid and there’s so little at stake, it’s impossible to care about what happens to them from one moment to the next, much less the outcome of an entire night in New York. (The script is credited to veteran Ron Bass, as well as Jen Smolka, Chris Shafer and Paul Vicknair.) The city does look lovely, though; Evans knew well enough to learn from people in other departments and let them do what they do best. Cinematographer John Guleserian (“Like Crazy,” “About Time”) makes Manhattan glitter and shimmer in all the most romantic ways, but there isn’t much inside that pretty packaging.

When we first see Evans’ character, Nick, it’s from afar in Grand Central Terminal where he’s playing his trumpet for loose change late at night. As the busy train station is winding to a close, a pretty blonde comes dashing past him, dropping her cell phone on the ground and breaking it in her haste. She’s Eve’s Brooke, and she’s just missed the 1:30 a.m. train to New Haven. When the gentlemanly Nick catches up to her and tries to help her get home, she’s rude and dismissive, even though her purse has been stolen and she’s now without a phone, as well.

Inconveniences like these conveniently keep piling up throughout the course of the night to keep these two together: denied credit cards, a dying cell phone battery, not enough cash for a cab or a bus. So do random side trips as they try to scrounge up some money – to old friends, bars, a psychic and a hotel party (where they pretend to be the musical act with a stripped-down rendition of “My Funny Valentine,” which grinds the film’s already meager momentum to a halt).

Through it all, they stroll leisurely throughout various downtown neighborhoods, telling their stories about career choices and lost loves and eventually sharing their secrets and fears. For a movie that’s supposed to be a race against the clock to get Brooke home, “Before We Go” is strangely devoid of urgency. She’s a refined, married art dealer vwhose future hinges on returning to her house by morning; he’s a self-deprecating, brokenhearted jazz musician with a big audition in the morning.

None of it is compelling. Empty platitudes like: “Sometimes you have to just make the choice and jump” only highlight how insubstantial these characters are. At one point, Brookes insists: “It’s complicated,” in reluctantly describing her marriage. But is it really? Awkward as her domestic situation may be, she can resolve it. The same is true of Nick, who’s still pining for the ex-girlfriend (Emma Fitzpartick) who walked out on him six years earlier. Time to get over it, dude. You’re a hunky, kindhearted musician and you look like Chris Evans.

And a running bit in which the two stop at pay phones and pretend they’re time machines to give the earlier versions of themselves advice is never clever. Not even once. Not even when present-day Nick tells 2004 Nick to bet on the Boston Red Sox to win the World Series, the actor’s beloved team in real life.

Evans clearly has some solid artistic instincts here, and it’s nice to see him shift gears and make a small, intimate film for his first outing as director. Hopefully the next time he’s between blockbusters and in need of a creative outlet, he’ll have a better stack of scripts to consider. 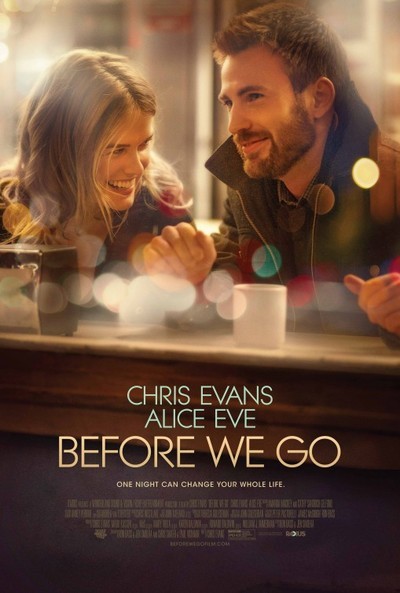 Rated PG-13 for brief strong language and some suggestive content.