After seeing "About Time," a time-travel fantasy that is basically "Groundhog Day" with Brit accents, a nice-bloke hero and minus a rodent (unless you count a rat of a boyfriend), I realize I have a problem.

I cannot help but fall for Richard Curtis's rather self-indulgent romantic comedies. My level head might be crying 'No,' but my lopsided heart can't help but say yes. For me, resistance is futile when it comes to his scripts for "The Tall Guy," "Four Weddings and a Funeral," "Notting Hill" and "Bridget Jones' Diary" (which he co-wrote along with the unfortunate sequel that shall not be named).

Of course, "Love Actually," his 2003 directorial debut, is a towering multi-layered masterwork that fairly oozes gooey woo and has grown into an annual Christmas TV tradition with its parade of befuddled Englishmen in varying stages of amorous yuletide desire.

I do draw the line, however, with his efforts with Mr. Bean—an enterprise that is essentially Jacques Tati's Monsieur Hulot for dummies—and his unwatchable second directing effort, "Pirate Radio," that saw the likes of Philip Seymour Hoffman and Bill Nighy (Curtis's go-to secret weapon of mass appeal) go down with the ship amid much sleazebag behavior.

But during the course of being seduced by his current paean to the power of love and its underlying message to simply live each day as if it were your last, this thought occurred: Something about Curtis's films allow cinematic endorphins to be released into the brain and generate a state of euphoria that is akin to absolute bliss.

To experience it, you just have to allow the analytical parts of your mind to unclench during the dodgier bits of business—all these pasty well-off people and their problems, oh woe is them!—and go with the feel-good flow.

And so I did until the last third or so with "About Time" and began to especially admire the often-impeccable casting in movies that feature Curtis's handiwork. At 53, Hugh Grant—a former mainstay—has matured far beyond impersonating fluttery-eyed fumblers in the throes of courtship. But the filmmaker has found a perfect replacement in the abundantly beguiling presence of Domhnall Gleeson, the son of Brendan Gleeson of "In Bruges" and Mad-Eye Moody fame.

Not that you would know it from the young Irish actor's last big role, the somber, bushy-bearded landowner Levin in last year's "Anna Karenina." Here, though, he is slightly more grounded than Grant (and his copper hair color provides fodder for ginger jokes, an Anglo staple) as Tim, a lawyer-to-be who is gobsmacked to learn at age 21 that the men in his wealthy family of eccentrics share the ability to go back in time. That the news is delivered in the most charming off-handedly fashion by his father in the form of Nighy, who never fails to amuse at the very least and astonishes almost always whenever he is onscreen, undercuts the questions that nitpickers might have about the process.

One major caveat: You can only revisit and revise portions of your own life. Or as Nighy puts it, "You can't kill Hitler or shag Helen of Troy." That Tim tends to go into a Narnia-esque wardrobe to begin his detours into the past adds a quaintly homey touch that is light years away from Star Trek or even H.G. Wells.

Once he is over the shock, Tim decides to concentrate on using his newfound ability to improve his love life. After fixing a disastrous New Year's kiss situation but failing to convince a comely summer visitor to give him a chance, he gets serious about his settling-down pursuits after moving to London. There he encounters an American named Mary (Rachel McAdams at her most infectiously fetching) who is mad about Kate Moss, prattles on about her too-short bangs while referring to them as "fringe" and will be revealed to have quite good taste in stylish frocks.

During one of Curtis's typically untypical romantic meet-cute interludes, he has the pair first run into one another during what amounts to a literal blind date at an actual restaurant named Dans Le Noir, where patrons dine in complete darkness and are served by sight-impaired waiters.

For Tim and Mary, it's a case of like at first unsight after a server decides to seat them together along with their less-than-a-perfect-match friends. She quickly gives him her number once outside the eatery. From there, typical relationship moments tumble by—the first real date, the first sexual encounter, the sharing of living space, the meeting of parents, the proposal, the exceptional rainy-day wedding sequence (you will be Googling Jimmy Fontana and his song, Il Mondo) and so on, all repeated, reshaped and improved slightly by Tim's time-travel twiddling.

Until then, it is easy to ignore the nagging what-ifs the premise presents. But once babies get involved and potentially sad verging on tragic situations complicate matters, Tim can't so blithely alter his reality without unwanted consequence. At this point, you will either put up with "About Time" or think it's about time you leave, especially if you have issues with a husband who thinks it's OK to continue to keep his magical do-overs a secret from the person who is now his wife. But do stay, if only to witness Nighy's awesome ping-pong pantomime at the very least.

One character provides the true bliss litmus test of whether or not you are immune to the Curtis effect: Kit Kat (Lydia Wilson), Tim's impossibly offbeat nature sprite sister who adores purple T-shirts, apparently doesn't own a comb, gives hugs that are more like full-contact body slams, is prone to dating awful men and is ill-equipped to cope adulthood. In other words, Kit Kat typifies the dreaded Manic Pixie Dream Girl at her worst.

My favorite part of "About Time" has nothing to do with the love story, however, and has everything to do with Tom Hollander as a deeply nasty playwright—who briefly is Tim's landlord and, this being Curtis World, is wickedly funny. When Tim learns that the premiere of his scabrous friend's latest production was a complete disaster after an actor goes blank while delivering a big speech, he of course decides to fix it.

That the stars of the show are none other than the esteemed Richard Griffiths and Richard E. Grant in invaluable cameo roles and that they end up provoking some of the biggest laughs of the movie demonstrates why Curtis is a comedy genius. If only he knew when to step back in time and make a few changes himself. 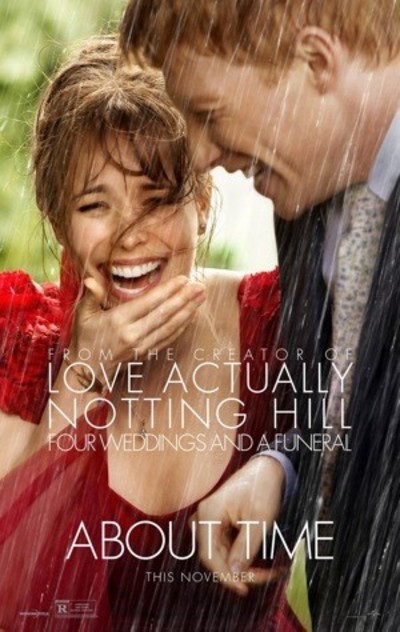