Devotees of films about the U.S. space program will need to do a thought experiment to immerse themselves in "Armstrong," David Fairhead's documentary about the life and mind of Neil Armstrong, the first person to set foot on the moon.

The movie is sleek, smart, and reasonably thorough, and it offers the enticement of never-before-seen home movies provided by Armstrong's family. But it can't really stand out from the flood of material released to cash in on the 50th anniversary of the moon landing, because it arrives on the heels of two daring efforts, Damien Chazelle's "First Man" and Todd Douglas Miller's "Apollo 11." The former used subjective filmmaking techniques to illustrate the constricted mentality of Armstrong, who experienced unprecedented elation and deep sorrow (particularly over the death of his young daughter Karen, who died of a brain tumor when she was just two) but could not express it due to his social conditioning. "Apollo 11" took a more panoramic view (or mosaic, considering all the split-screens on display), showing that Armstrong was one of hundreds of people laboring to get an American spacecraft onto the lunar surface, and reconstructing the entire endeavor to transform it into a spectacular sound and light show for moviegoers.

"Armstrong," in contrast, is far more traditional, using the moon mission as a present-tense framing device it can periodically return to. The flashback material starts at the beginning, with Armstrong's childhood, then follows him on to combat duty as an Air Force pilot in Korea, then on to an impressive career as a test pilot, then finally rejoining the space program, where Armstrong suppressed deep personal trauma and made history.

The filmmaker gets a surprising number of important people from Armstrong's life on record, considering that many of them are eighty or older and have been heard from elsewhere. The most moving is his widow Janet, who tells charming stories of their courtship and early years. Harrison Ford reads personal writing by Armstrong, much of which has never been used in a film before. But his warm yet unsentimental voice—while pleasing to the ear, and evocative of so many heroic movie roles—clashes with the more ordinary voice of the real Armstrong, as heard in archival footage. This is a thorough and respectable work, but not an inspired one. With a few exceptions, it doesn't give you much that you can't get from other documentaries about Armstrong and the space program, or from reading a decent nonfiction book. 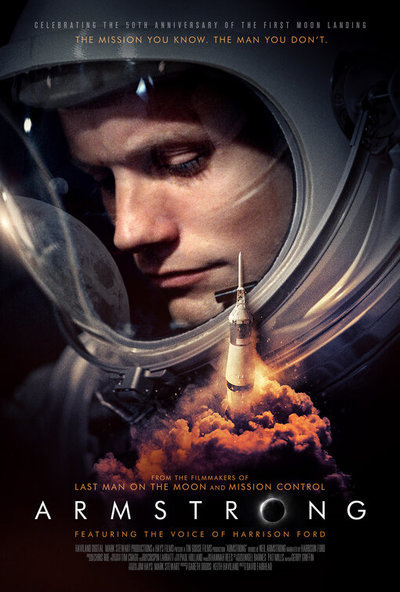 Neil Armstrong as Himself (archive footage)