"Apollo 11" isn't like other documentaries about the first moon mission. In fact it isn't like most other movies, period. It's magnificent and unique, an adrenaline shot of wonder and skill.

Todd Douglas Miller, who edited and directed "Apollo 11," tells the story entirely in the present tense, omitting the historian interviews and vintage news clips that you expect to see in films on this topic. Even though the filmmaker gained access to previously-unseen archival footage and previously-unheard audio recordings, and synced them to create an almost vertigo-inducing sense of immediacy, this isn't a history lesson. It's more like a psychedelic sound-and-light show, conceived in the spirit of a "trip" film like "2001: A Space Odyssey," "Woodstock," "Apocalypse Now" and "Koyaanisqatsi."

Simple, line-drawn animations in the film, reminiscent of the computer graphics in "2001," explain what the various spacecraft are going to do. Walter Cronkite is heard but not seen, and his voice is given no more dramatic weight than the voices of NASA announcers, supervisors and technicians speaking into headsets. The most thrilling moments—the liftoff; the landing; the departure from the lunar surface; the descent through Earth's atmosphere—are conveyed mostly in unbroken images, taken from a fixed vantage point (such as the shot through a capsule window during re-entry that shows flames roasting the spacecraft's heat shield). The movie is intuitively assembled, fond of the grand gesture, and often playful. Having already been wowed by it on a medium-sized screen, I can only imagine how well it will play on a huge one.

And here, we need to note the shape of the image. It's 2:1, twice as wide as it is tall—the dimensions of a science fiction epic, a biblical spectacular, a Western adventure, or one of those long "roadshow" movies that used to play in theaters around the time that NASA was preparing to send Neil Armstrong, Buzz Aldrin, and Michael Collins to the moon. This choice was inspired by the rarest and most impressive new material unearthed for the project: 65mm motion picture film that was shot for an ultimately abandoned theatrical documentary. These images have astonishing clarity and density. Their vivid, cool colors will remind buffs of science fiction classics that were playing in theaters circa 1969.

But these images aren't just special because of their crispness, scale, and period personality. They're special because, when it became clear that the documentary fell apart as a commercial release, NASA took over and pointed the cameras at the technicians, construction crew and spectators, capturing the mundane but crucial context around the astronauts' feats. We see shots of the launch pad being wheeled into position atop a gigantic platform with caterpillar wheels, men in hardhats climbing scaffolding that reaches hundreds of feet in the air, spectators (including parents with children) setting up in a nearby department store parking lot to watch history being made: all the stuff the schoolbooks leave out.

When the story moves indoors to mission control, "Apollo 11" often splits the screen in the manner of "Woodstock" and other '70s concert documentaries. This lets the movie follow multiple, simultaneous lines of action in different locations, be they technicians working consoles on opposite ends of the control room, or astronauts on the lunar surface taking a phone call from then-president Richard Nixon while NASA watches the exchange on a screen in Houston. The film also uses split-screens to show the simultaneous vantage points of the orbiter and the lander as they separate or reunite. A joyous music montage splits the image into ten panels, each showcasing groups of NASA employees, a mosaic conveying the group effort required to pull off this magic trick.

The rock concert vibe is cemented by Matt Morton's pulsing electronic score, which is based around an analog-era Moog synthesizer of the sort showcased on albums by The Beatles, The Who, and Stevie Wonder and heard in film scores like "A Clockwork Orange" and "Tron." A title card at the end assures us that Morton's score was created using only instruments that existed back in 1969. This is a super-nerdy and completely unnecessary assurance, because (a) Morton's work is much more reminiscent of 1980s film scores by the likes of Vangelis and Tangerine Dream than anything from Neil Armstrong's era; and (b) it often suggests the kind of score that would play in a high-tech crime thriller while robbers cut into a safe with blowtorches; and most importantly, (c) who cares as long as it's awesome, which this score totally is.

Nevertheless, that particular assurance is glorious in its own way, because it underlines the totality of vision that unites every aspect of this production, down to the most seemingly irrelevant technical note. Films this completely imagined and ecstatically realized are so rare that when one comes along, it makes most other movies, even the good ones, seem underachieving. Any information that you happen to absorb while viewing "Apollo 11" is secondary to the visceral experience of looking at it and listening to it. It's the kind of movie that you feel in your marrow, and that you might have a body memory of when you think back on it later, like when you're lying in bed at night after a long day at the beach, smelling the salt water in your nostrils and feeling the waves rising and falling in your legs and back.

Late in the film, after Armstrong, Aldrin and Collins have been there and back again, we see a shot of the control tower of the aircraft carrier that was sent to retrieve the capsule after splashdown. The moon is hanging in the evening sky, small in the frame, a pale dish. We feel differently about it having been there. But it has lost none of its majesty, because we understand how much work it took to visit it. 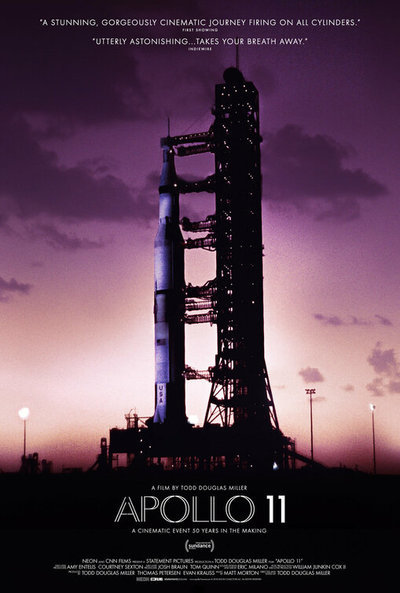