It used to be a pretty reliable rule of moviedom that sequels to inferior horror films were even more worthless than the original. After all, how do you build on nothing? Last year’s “Ouija: Origin of Evil” was widely and correctly considered superior to the dull original, and 2017 repeats that shocking trick with “Annabelle: Creation,” a vast improvement over the monstrously awful “Annabelle” from 2014. Whereas that film felt like a quickie way to cash-in on the success of “The Conjuring,” David F. Sandberg’s follow-up doesn’t feel focus-grouped to death or spawned purely for profit margins. It has echoes of the original film, and works more with mood and less with cheap scares than either “Annabelle” or “The Conjuring 2,” resulting in a truly effective genre flick. It’s not perfect, but it’s damn closer than anyone would have predicted.

While the title makes clear that this is an origin story for one of the creepiest dolls in film history, it also sets up its own characters and universe in which to play, one that echoes the construction and themes from James Wan’s original film more than any of the works that have followed. Just as that box office hit centered on a group of sisters caught in a nightmare, “Annabelle: Creation” is essentially a haunted house flick with another collection of young girls faced with things that go bump in the night. In this case, it’s a group of orphans who are allowed to live in a large, isolated home when their orphanage closes. Led by Sister Charlotte (Stephanie Sigman), the girls vary in age—again, like the sisters in the original film—but focus immediately falls on Janice (Taliha Bateman), weakened by polio, and her sweet best friend Linda (Lulu Wilson). Any good horror fan knows that evil always preys on the weak and kind first.

And so it’s Janice who first notices something isn’t right in the Mullins house. Sure, Samuel Mullins (Anthony LaPaglia) seems like a nice enough guy, but he’s overly concerned about anyone going in his deceased daughter Bee’s room. And Esther Mullins (Miranda Otto) is even more mysterious, injured, bed-ridden and ringing a bell whenever she needs her husband. The girls mostly stay to themselves, but Janice is the first to notice that Bee’s locked room is open in the middle of the night, and then she finds that damned doll. Before you know it, souls are being fought over, lights are going out, and religious imagery is being subverted everywhere. These movies have several themes, but one of the most prominent is the utter failure of religion to protect us from true evil. Sandberg loves to cast light through crosses on windows and gets some incredible mileage in the final act with imagery that recalls the crucifixion.

Yes, believe it or not, “Annabelle: Creation” has what the first film was so clearly lacking: a strong visual language. Sandberg and his team do a marvelous job at building tension through old-fashioned horror movie means like forcing our perspective to stay with our terrified young ladies. As their eyes widen and the hair on their neck goes up regarding just what is making that creaking sound down the dark hallway, so does yours. Sandberg knows that fear manifests most greatly from the unknown and he has a ball playing with sound and light in “Creation.” Creaking chairs, footsteps when everyone should be asleep, that damn bell Mrs. Mullins rings—all get used masterfully in the first half of the film.

Of course, we know all of these tricks. And Sandberg knows we know. Rarely have I seen a mainstream horror movie that riffs more playfully with the awareness of the modern horror audience. Sandberg knows that if he shows you an open door into a darkened room, your eyes are going to be planted on that darkness, searching the edges of the frame for movement, glowing eyes, whatever. If he puts Annabelle in the background, no one is paying attention to the foreground. He has a blast with these constructions during the set-up parts of "Annabelle: Creation." And then Sandberg and his team unleash the fury in the final half-hour of the film, constructing some of the best mainstream horror sequences of the last few years, including one in a barn that had the poor large gentleman next to me just whispering “no, no, no.” That’s when you know a movie is really working. When it reduces grown men to single syllables.

“Annabelle: Creation” isn’t perfect. It’s a bit too long (109 minutes) and sometimes feels like it’s making up its own story logic as it goes along. In that sense, it’s more like a ghost story told around a campfire than a literal origin story—a blend of religious imagery, grieving parents, weakened children, and otherworldly evil—and that urban legend aspect could have allowed Sandberg and writer Gary Dauberman to lean into the insanity of their concept a bit more. The aforementioned barn sequence being a great example of when the movie knows to go crazy, but the movie often feels like it’s pulling back from true risk-taking. It sometimes seems too restrained, believe it or not given it’s about a possessed doll, and a few too many of the scariest scenes end ineffectively with jump scares that don’t pay off like the great build-ups. But, again, it’s more about what could be making that creaking sound in the hallway than the heavily made-up demon that’s actually there. For the most part, “Annabelle: Creation” understands that fear. And it’s now part of a totally unexpected trend that’s tearing down one of this critic’s greatest fears—the horror movie sequel. 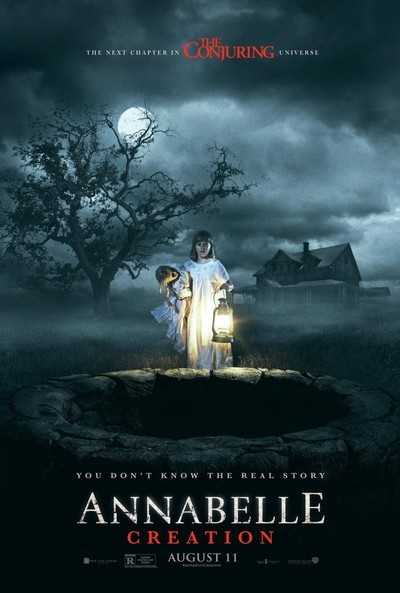