A word of advice for horror movie producers: If you’re going to riff on ‘70s horror classics like “The Omen” and “Rosemary’s Baby,” make sure to look more deeply at why those films connected with viewers rather than just stealing their imagery. Merely mimicking them aesthetically is a hollow exercise, and proof that you don’t understand that horror is more than a series of jump cuts and frightening images. Horror, at its best, taps into something deeper.

There’s nothing deep about “Annabelle,” the spin-off of “The Conjuring.” It offers surface level scares without the undercurrent of humanity needed to make them register. Director John R. Leonetti and writer Gary Dauberman work proficiently enough on a technical level to craft a few scenes that get the heart racing, but the climax of “Annabelle” is so misguided, silly and even offensive that any excuse genre fans may be inclined to make for the mediocre hour-and-a half that precedes it will likely turn to rage.

For the record—and it’s worth noting because of how angry our original review of “The Conjuring” still makes fans of that film—I was a fan of James Wan’s 2013 ghost story. The director took a giant leap forward in that work, proving he understands numerous elements that modern horror directors ignore, such as the use of sound design and setting to create tension. These elements are discarded in “Annabelle."

If you saw the 2013 hit, you remember the creepy doll that wouldn’t go away. Ghostbusters Lorraine and Ed Warren kept Annabelle in a locked case, recognizing the true evil held within. How did Annabelle go from a relatively harmless but totally creepy doll to a tool of the devil? “Annabelle” tries to tell that story, using the Manson Murders and “Rosemary’s Baby” as a backdrop. Some may be tempted to write off “Annabelle” on concept alone, in that it’s something of a cash grab, like a straight-to-video sequel designed to strike while a hit predecessor's iron is still hot. Still, I would argue that “Annabelle” has the core of a good film within it. It's about how changing times in the ‘70s, when otherwise safe neighborhood dwellers started locking their doors and apartment denizens began to suspect their neighbors; the iconography of youth became sinister. You can sense shreds of this idea in “Annabelle,” but the film doesn't develop them.

We learn that Annabelle was owned by a lovely young couple named Mia (Annabelle Wallis) and John (Ward Horton). In the run-up to the birth of their first child, John gave his wife the doll as a part of her extensive collection. As Mia nears her due date, the couple faces unimaginable horror in the form of a pair of Satanic cultists who break in, stab Mia in the belly, and end up dead in their home. The female cultist happens to be named Annabelle Higgins, and some of her blood lands on the doll Annabelle. Before you know it, Mia is seeing shadowy figures on the stairs, hearing noises in the night and realizing that something evil wants her baby.

Thematically, nothing in “Annabelle” is developed beyond a level that might make it suitable for horror movie manipulations. When we meet religious characters like Father Perez (Tony Amendola), “Annabelle” threatens to take on some "The Exorcist" or "The Omen"-like undertones, chronicling a time when some felt that Americans lost touch with their religious institutions. But the movie doesn’t really go there. When no one believes Mia’s haunting stories, “Annabelle” threatens to become a piece about how new mothers can be ignored, their concerns portrayed as the byproduct of hormones. But this notion isn't developed, either.

There are other problems. Wallis and Horton are remarkably unengaging leads. She mumbles, he over-emotes, and the doll is allowed to steal scenes. And the film is visually flat. Pan reveals (panning across a door or room to reveal something in the background) are over-used, and the sound is mixed to grating levels. It’s a movie that screams "Boo!" instead of trying to get under your skin. There is one great set piece involving a storage unit in the basement and an elevator that just won’t leave it, but that’s something you can watch on cable later, while ignoring the weak film that surrounds it. 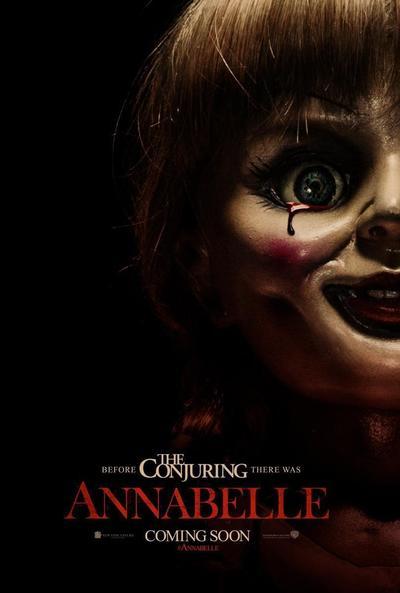 Rated R for intense sequences of disturbing violence and terror